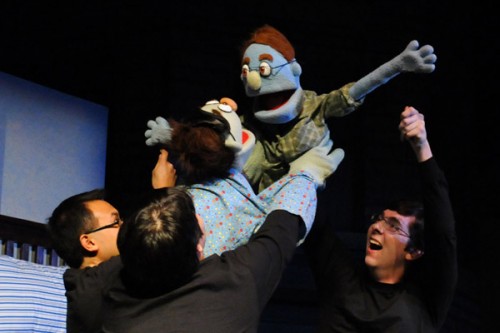 Some of the cast of Avenue Q. Photo by Jarret Baker

The actors were marvelous, the musical numbers well harmonized, and the set was well crafted.

Offensive material aside, this satirical puppet musical has no doubt gathered a following of die-hard fans. The cast of Dominion Stage performed to a full house on Saturday night at Gunston Theater One in Arlington, a popular venue for community theater in Northern Virginia. The audience, comprised of a wide age demographic, was brimming with excitement before the doors had even been opened. 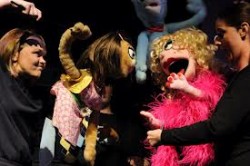 Avenue Q, based on the book by Jeff Whitty, was made into a musical by Robert Lopez and Jeff Marx, making its Broadway debut in 2003. The story focuses on the journey of recent college grad Princeton, played by Devon Ross, who moves into the “affordable” district of New York City, hoping to find his purpose in life. The opening number, entitled “What Do You Do with a B.A. in English?” brings first light to the show’s overarching theme of post-baccalaureate bewilderment. This is soon followed by a disparaging “It Sucks to Be Me” number, which solidifies the musical’s satirical intent.

While it has no affiliation with the children’s television series, Sesame Street, it was originally written in reaction to the series heartwarming message. Even the set is reminiscent of the 90s series, displaying rowhouses and large garbage bins. The famous message, less you forget, is that every person is special, and that he/she is capable to succeeding at whatever they choose.

Remember that message? Now imagine it being ripped to shreds and doused with gasoline.

Leaving the flames of hope and optimism behind, Princeton becomes acquainted with his neighbors, a posse of screw-ups and misfits. Among them were human characters–the unemployed, 33-year-old comedian Brian (played by Sam Nystrom), his japanese fiancé, Christmas Eve (played by Evie Korovesis), and of course his new landlord, Gary Coleman (played by Jonathan Faircloth). The live actors on stage were joined by many others who manipulated puppets while acting. Among these were the VERY single Kate Monster, played by Heather Friedman, the closeted gay Rod and his roommate Nicki, played by Patrick Graham and Christopher Rios, and the curmudgeon Trekkie Monster, played by Nathan Tatro. The simultaneous acting and manipulation of puppet was extremely well executed by all actors. 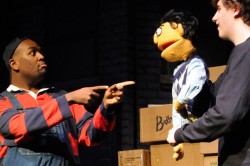 However, the second act, which hones in on the deeper morals of the story, was at times hard to swallow. After greatly enjoying of the unveiling of the peer-pressuring “Bad Idea Bears” in earlier scenes, their comedic references to suicide in the second act began to push the envelope on downright distasteful. I was further disappointed at the stereotypical Madonna vs. Whore conflict that develops as a part of the love triangle between Princeton, Kate Monster, and Lucy the Slut, played by Amy Baska.

In essence the performance was a success. The actors were marvelous, the musical numbers well harmonized, and the set was well crafted. And the jokes, playing off all the things we wish we could say but don’t due to social constrictions, were well delivered. But I guess I’m just more sensitive than I thought.

Running Time: a little over 2 hours with an intermission.

Advisory: Not for children (adult themes) or for the less sensitive among us (offensive stereotypes).