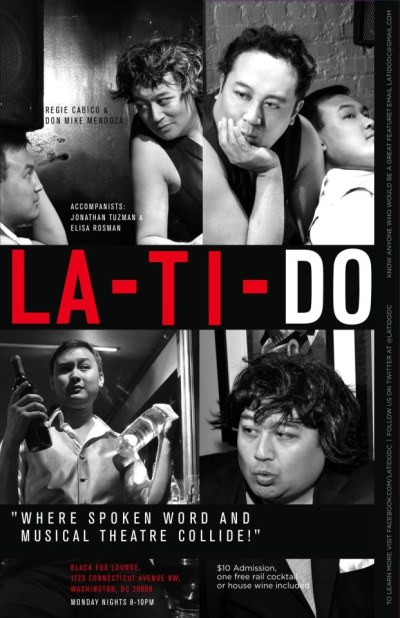 In the basement of Dupont Circle’s Black Fox Lounge, every Monday night, the two worlds of musical theatre and spoken word have a very welcome collision. La- Ti-Do brings together the best from both worlds in what has become a hotspot for performers and spoken word artists alike.

Recently I attended La-Ti-Do’s first anniversary show and I was very impressed by the atmosphere and the quality of the performers. It’s not often I get to see people like Chris Sizemore, Joshua Morgan, and Tina Ghandchilar all on one bill together. Compile that with spoken word artists such as Natalie Illum and Sarah D. Lawson and standup comedian Sampson plus up and coming singers like Tara Trinity and Nila Kay, and you have an eclectic mix happening. That was only a partial list but you get the idea of the quality. The song list was as eclectic as the range of performer with songs, ranging from “Walking in Memphis” sung by Chris Sizemore to “Bill” from Show Boat as performed by Matthew DeLorenzo. We’ve come a long way from the lady singing it on top of the piano folks.

La-Ti-Do is the brainchild of recent AU graduate DonMike Mendoza and actor turned spoken word artist Reggie Cabico. They wanted to create something truly unique to the DC area. Mendoza says when he told people that this was going to be a weekly attraction, they thought he was crazy. They said you will never be able to maintain the quality of the talent. Well those folks were wrong because after one year La-Ti-Do is a place people want to come back to again and again. Mendoza says “After you come here once to perform you are hooked.” Cabico says, “It’s because we are like a family here. You can come and perform anything you like with no strings attached.” He’s right: it is like a family. The basement of the Black Fox Lounge is a cross between the old Village Vanguard in Greenwich Village and doing a show in your basement. It’s that cozy.

This Monday February 4th is a musical theatre lover’s dream show. It features Shayna Blass, Emily Levey, John Dellaporta, Erin Ryan, and the cast of Keegan Theatre’s Cabaret. Then for you spoken word types there is Judson Lewis of Encyclopedia DC with musician extraordinaire Jonathan Tuzman on the piano. 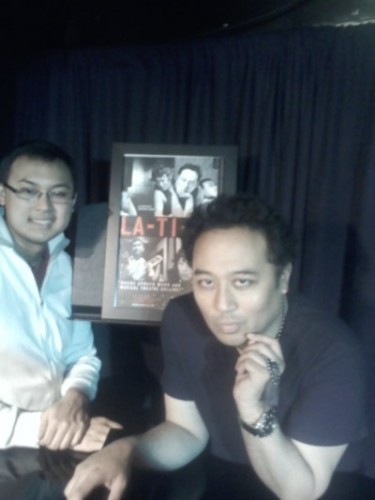 La-Ti-Do is a rare breed of show for many reasons. First off, it is weekly as opposed to monthly. Secondly, at only $10 with no food or drink minimum, it is truly the best entertainment deal in town. And last but not least, it shows what happens when two guys like Mendoza and Cabico get an idea and run with it. La-Ti-Do is their vision and they are doing DC a great service with this weekly performing arts showcase. With the advent of being able to DVR TV shows you can now make La-Ti-Do a weekly ritual. By doing so, you get to see the wide range of talent the DC area has to offer and in the process be a part of continuing Mendoza and Cabico’s vision.