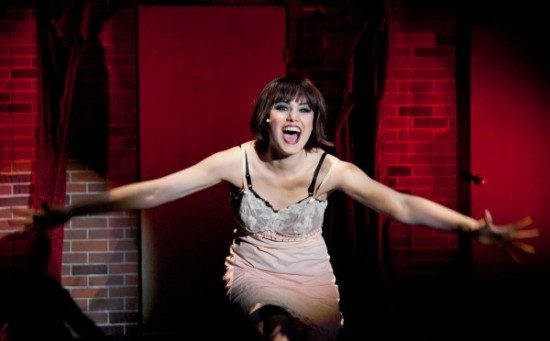 Keegan Theatre’s Cabaret could not look more authentic than within the confines of the historic Church Street Theatre. With bare brick and dark lighting, the feel is decidedly subversive, as were the German cabarets of the pre-Nazi Weimar Republic. Scandalous by American standards, the Weimar’s loosening of censorship laws and its tolerance of homosexuality made it a Mecca, so to speak, for both the morally adventurous, sexually curious traveler and for the politically active fomenter of radicalism.

Such is the world of Keegan’s Cabaret.

To be sure, Keegan’s production captures the musical’s sense of cultural subversiveness, even though the production does not itself become subversive, pulling its punch in several key departments. Although the cast has strong voices and the orchestra entertains, the acting occasionally loses focus, venturing into choices that puzzle more than edify. And although the show’s concept generally continues to resonate, in Washington 2012 those black boots and red swastikas need a little push to once again become a vital icon of villainy.

a show worth seeing…

And let’s be honest: the book of Cabaret is a mess, and it takes a director of invention to breathe it to life. The original 1966 production was a break-through, but with only the baby’s head emerging. Half concept-musical, half story-musical—the delightful characters, the counter-cultural themes, and the wonderful music pushed the show to fame. Then Bob Fosse’s brilliant 1972 film adaptation with Liza Minnelli and Joel Gray sent the show to stardom. The award-winning 1998 Broadway revival version, which was used by Keegan, placed most of the action within the confines of the Kit Kat Klub (yes, that’s the KKK). This move attempted to solve the book’s internal stylistic confusions, while leaving the Emcee (Paul Scanlan) as the central commenting Jokster of the tale, and the love story between Fraulein Schneider (Jane Petkofsky) and Herr Schultz (Stan Schulman) as the musical’s thematic core. The most important change lay in the love affair between headline dancer Sally Bowles (Maria Rizzo) and American novelist Clifford Bradshaw (Bradley Foster Smith). Honoring Charles Isherwood’s original stories, upon which the musical is based, this 1998 version made Cliff’s sexual orientation ambiguous, giving him both heterosexual and homosexual relations. It then eliminated several songs that highlighted the Sally-Cliff romantic attraction. The result—this Cabaret’s driving narrative is now the Schneider/Schultz story, with the Sally/Cliff affair appearing as powerful thematic moments but without a sustaining through line. 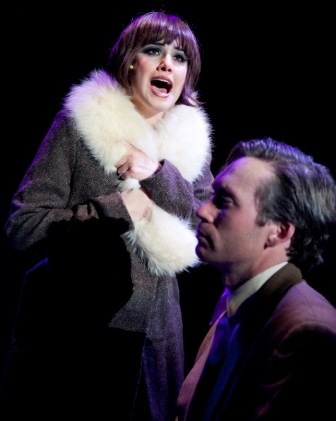 The show’s two leads, Scanlan and Rizzo, deliver strong performances. Scanlan’s Emcee is a charismatically good singer with great audience rapport. Although some of his movements are not as crisp as one might like, he proves himself more than capable of leading the audience by the nose. His renditions of “If You Could See Her” and “Money” are spot on entertaining. Rizzo’s Sally Bowles definitely has the voice of a talented cabaret artist. She commands the stage when she has to, and retreats into passive aggression when forced by necessity. Her conflict around leaving Cliff and returning to the stage, however, never fully materializes as the chemistry between Sally and Cliff goes AWOL. Even so, Rizzo’s emotional rendition of “Cabaret” could not be more heartfelt.

As portrayed by Petkofsky and Shulman, Schneider and Schultz are most definitely the evening’s emotional center. Petkofsky’s rendition of “So What” gives her the hard edge of a 50-year-old single landlady while her delightful “It Couldn’t Please Me More” truly transforms that pineapple into an aphrodisiac, melting her edge. Meanwhile, Shulman’s performance of the Jewish fruit merchant Schultz, with his head tilted toward the sun in wonderment, steals the show in the character department.

Smith’s Clifford Bradshaw, the would-be fiction writer who comes to Berlin to energize his novel career, captures Cliff’s pensiveness and pessimism, but unfortunately he seems oddly out of sorts for most of the show. With his songs all but non-existent, he seems more dazed and confused than in love; and more fearful for his life than genuinely outraged by the rise of fascism. To be honest, beyond the basics, I simply did not know what to make of his character, and the script does not help.

The affable Ernst Ludwig, played by Christopher Gillespie, seems quite the unlikely Nazi, which is after all the point.  It makes his bigotry all the more arresting when it finally reveals itself. 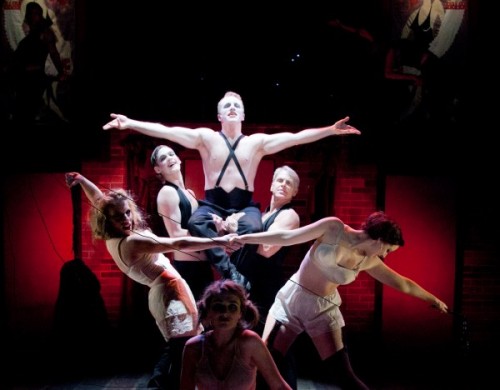 The rest of the ensemble delivers strong performances. The girls at the KKK (Shayna Blass, Sarah Chapin, Alison Crosby, Paige Felix) are delightfully differentiated, with Sarah Lasko giving a sassy turn as the prostitute fulfilling her patriotic duty with every sailor in town (for the life of me, I still do not know why so many German sailors traveled to land-locked Berlin in the early 1930s.). Meanwhile, the boys at the Klub are indeed as pretty as the girls.

The show’s directors and design team did an admirable job. Directors Christina A Coakley and Michael Innocenti created numerous strong images and kept the show moving despite its numerous set changes. They did not, however, find solutions to the book’s many confusions, and certain choices—like the use of a gramophone to deliver the first rendition of “Tomorrow Belongs to Me”—remains inexplicable. Innocenti’s production design kept the script’s various locales clear and dynamic, and Shadia Haliz did a fine job of seeping the characters in appropriately seedy, yet somehow elegant costumes. Rachel Leigh Dolan’s choreography added bits of raunch to the proceedings, though I wonder if more might have increased the show’s effectiveness.

Cabaret’s exploration of theatre and its relationship to society, particularly the art form’s ability to challenge those political elements that threaten a culture’s survival, should always be an important topic of conversation. For theatres more than any other cultural institutions gauge the attitudes and passions of the communities they support. To be sure, today’s America faces societal challenges as well as threats potentially totalitarian, and Cabaret’s “I Don’t Care Much” still shouts its irony across the stage. That alone makes Keegan Theatre’s Cabaret a show worth seeing, and then there are all those pretty girls and boys, and that ear tingling music.

Running Time: Two hours and 30 minutes, including a 15-minute intermission.