Theatre Review: ‘Can I Really Date a Guy Who Wears a Yarmulke?’ at JCCNV 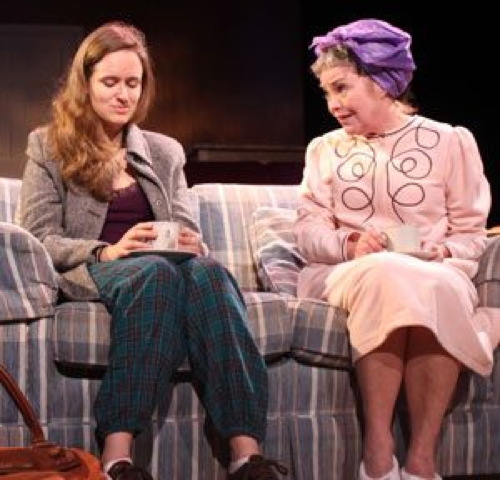 Can I Really Date a Guy Who Wears a Yarmulke? opened on Friday night to a nearly full house – a huge success for the Jewish Community Center of Northern Virginia, who was hosting their first theatre production since 2004.  The show features a young Jewish woman, newly arrived home from a propaganda-filled birthright trip to Israel.  Upon arriving back in the US, Eleanor meets Aaron, a handsome Jewish doctor who is everything she should want, but not necessarily anything she needs.  Along the way, they question what really matters in a partner and which parts of religion one can choose to accept and dismiss, as well as deal with their recently engaged best friends.

Amy Holson-Schwartz skillfully captured all of the facets of a self-aware group of young Jews.  Her award-winning script left the audience laughing and groaning as some things hit close to home and also quietly pensive as they recalled some of the more tragic events in Jewish history.  All around, Can I Really Date a Guy Who Wears a Yarmulke? is an enjoyable glimpse into the lives of two couples and the pressures they face from family, life, and – of course – tradition.

…the message, humor, and quality of the performance can be enjoyed by all.

Elizabeth Jernigan, as Eleanor, portrayed the slightly neurotic yet logical mind of a well-educated woman who just can’t seem to drink the spiritual Kool-Aid of a faith she can’t escape.  Jernigan pushes her character through a wide variety of emotions in a very believable struggle between being a good Jew and following her heart – wherever that may lead her. 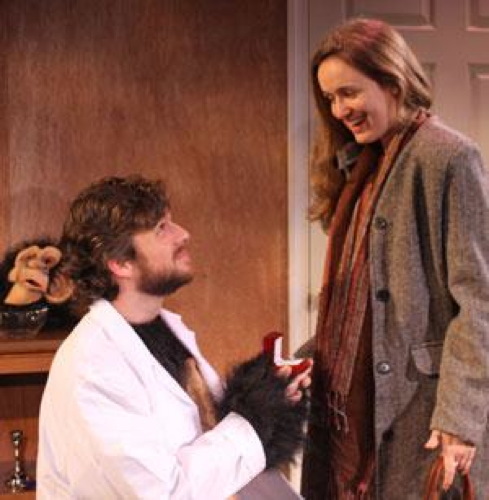 Robbie Gay as Aaron and Elizabeth Jernigan as Eleanor. Photo courtesy of JCCNVA.

Robbie Gay plays the handsome doctor, Aaron.  He balances out Jernigan’s Eleanor with a calm and sincere touch.  He uses a quick tongue and sharp wit to bring humor to his role, as a man with a complicated blend of science and religion.  Despite the conflict his character brings to Eleanor’s life, his fervent beliefs are portrayed with a simple honesty.

Amanda Spellman played several characters, including Eleanor’s best friend – a bride-to-be harassed by her mother’s dominating will.  Joshua Dick also plays multiple characters, skillfully transitioning from Aaron’s best friend to his brother – not that vast a jump, you might think, but Dick does a good job differentiating between them.  Also, cast as multiple characters were Charlotte Akin and Matt Dougherty, who provided comic relief and rounded out the show with a variety of characters from family members to evangelists.

The multi-tiered set, designed by Steven Royal, eliminated the need for lengthy changes and provided optimum viewing for the audience.  What really stood out was how the actors remained in character and the action continued on through the scene and set changes – most likely the inspiration of Director Michael Dove.

The Jewish Community Center of Northern Virginia’s mission is to offer quality programs which emphasize Jewish culture, identity, and values to people of all ages and backgrounds.  This message holds true in Can I Really Date a Guy Who Wears a Yarmulke?  While there are some “inside jokes,” the message, humor, and quality of the performance can be enjoyed by all.