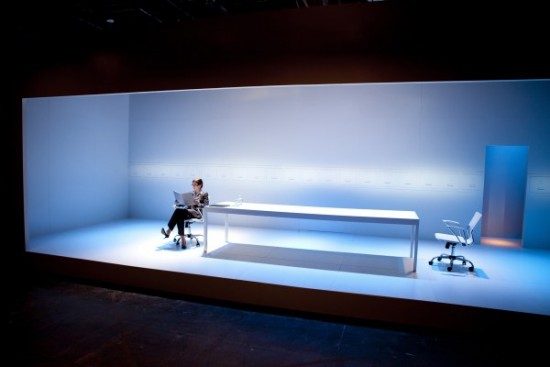 Studio Theatre’s US premiere of Contractions by Michael Bartlett is built on a simple premise. What if large multinational corporations were impersonal, yet politically correct totalitarian entities that want to control every aspect of their employees’ personal lives? What if the people who work for these global institutions were smart, capable individuals very much like the smart, capable individuals who fill Washington, DC’s K Street every working day—smart and capable, that is, until their biology clicks in. At that point, these independent hardworking human beings become will-less, mindless slaves who can no more control their lives than lab rats. Then, the corporate entities reduce and humiliate these “biologically infected” employees until those biological agents are extinguished.

…’Contractions’ has the potential to provoke discourse about the side effects of our legalistic, politically correct culture.

The first 30 minutes of this tight, cleverly constructed 60-minute play could not be more hilarious and insightful—that’s before the onslaught of biology. When the biology clicks in, and the degradation begins, this Contractions literally squeezes the humor out of its existence, becoming instead a macabre, sado-masochistic display of a workplace bureaucracy gone awry. As a result, we are left feeling not so much angry with the company for any acts of dehumanization or sorry for the worker and her status as victim; but disgusted by events which seemingly need not have happened, yet did happen. And why? The job market is tough for salespeople? Hardly. Apparently God—or in this case the playwright—willed these horrors into existence, in much the same way that the above-mentioned laboratory scientist might will his rats to suffer needlessly. Such is the thought-experiment that is Contractions. 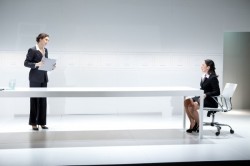 Directed by Duncan Macmillan, known to Studio’s audience as the British playwright of Lungs, Contractions stars Holly Twyford as the Manager and Alyssa Wilmoth-Keegan as Emma, the young saleswoman hoping to advance in the company. The Manager calls Emma into her office to question her about the possibility of an office romance. Contracts are read and definitions of inappropriate workplace relationships and the meaning of such words as “romantic” are spelled out; the linguistic battle is set. Macmillan superbly choreographed the verbal-gesture-smiling duels between Twyford and Keegan, giving his two stars the spirit of the game.

Twyford played the Manager as an icy impersonal geek dominatrix (yes, quite an interesting combination) who believes in fairness, who crunches the numbers, and who then lets the chips, however sharp, fall where they may. Keegan plays Emma as more than capable of matching her Manager quip for quip, challenging her on the meaning of a French kiss and even on the definition of a weeklong romp in the hay. The two actresses’ silent grins across a fifteen-foot clinically white table were as moist as an overly ripe peach, and we were delightedly never quite sure who had the upper hand. When Emma suddenly finds herself pregnant, however, the balance of power shifts, dramatically in the corporation’s favor, and much to our chagrin.

During the play’s final 30 minutes we watch with increasing distress as Emma loses her feisty self. No longer the young woman with a head on her shoulder, Emma becomes inexplicably subservient, unquestioning of company policy and its legal mind-games. As a result, the production loses his comic footing, unless of course one enjoys watching the spectacle of a cat clawing a defenseless mouse to pieces for thirty minutes. Perhaps, if Macmillan had elected to perform the script more tongue in cheek—more like a Saturday Night Live skit where dead babies and suicides are not quite as emotionally connected, then Emma’s loss of agency would not have had such a numbing effect. This Contractions becomes, however, a serious exploration of workplace ethics and, as a result, loses both credulity and integrity. 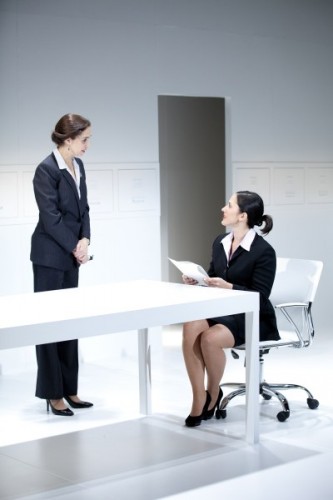 That said, the design team for this production has created a first rate laboratory / conference room for the Manager and Emma to play out Bartlett’s experiment. Set designer Luciana Stecconi imagined a world free of personality (and germs) yet capable of storing endless amounts of data, and with designer Colin K. Bill’s lights, offers the audience the perfect elegantly stylish Petri dish. Brandee Mathies’ costumes only enhance the elegance, until, that is, Emma is reduced to everyday wear. Finally, sound designer James Garver creates an auditory world with bio-chemical implications (although I will admit to sitting before curtain with vague feelings of homicidal rage moving in and out of my ears.)

To be sure, Contractions has the potential to provoke discourse about the side effects of our legalistic, politically correct culture. Global capitalism and its computer-aided bureaucracy do indeed threaten individual identity and personal freedom. And a woman’s biology remains an obstacle to her career advancement. The script’s deterministic nature and nullification of agency, however, undermine its serious political intent. Bertolt Brecht argues for a theatre committed to exploring contemporary social structures and the behaviors motivated therefrom. Though falling short, Contractions offers us a glimpse of just what such a theatre might look like in the electronic age.

Advisory: Not for children.