Theatre Review: ‘Daddy’s Dyin’…Who’s Got the Will’ at Bowie Community Theatre 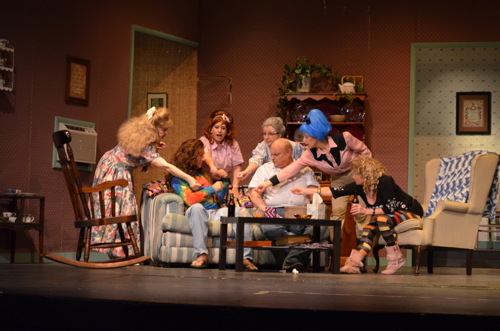 The entire cast of ‘Daddy’s Dyin’…Who’s Got the Will?’
Photo provided by Bowie Community Theatre

Bowie Community Theatre’s production of Del Shores’ Daddy’s Dyin’… Who’s Got the Will? is akin to spending an evening watching The Lawrence Welk Show at your grandmother’s farmhouse— if your grandmother is armed with a shotgun and all of your relatives are two sheets to the wind. Daddy’s Dyin’ presents a good-natured mélange of vaguely Texan, vaguely Middle American kitsch, delivered with great comedic timing and boundless energy.

Daddy’s Dyin’ takes place in the summer of 1986 in Lowake, Texas, and follows the adventures of the Turnover family as they try to settle Buford Turnover’s affairs before he inevitably kicks the bucket.  The problem is, Buford (Bill Jones) has misplaced his will, and it is up to his four children— the spinsterish Sara Lee (Maureen Roult), the estranged preacher’s wife Lurlene (Sharon Zelefsky), the beer-swilling Orville (Ken Kienas), and the country singer wannabe Evalita (Bernadette Arvidson)— to find it. The Turnover family is less concerned about Buford’s will, and more with bickering amongst themselves about who wronged whom in the past. Sharp-tongued Mamma Wheelis (Joanne Bauer) and Evalita’s hippie boyfriend Harmony (Scott Beadle) try to keep the peace, but even they cannot stop the family from falling apart at the seams. Hilarity, as they say, ensues.

Del Shores’ script provides an excellent comedic foundation. Wordplay, banter, and sarcasm abound. The humor is a little outdated to a modern audience’s ear, but sounds natural coming from the larger-than-life characters. Joanne Bauer gives a notable performance as Mama Wheelis. You can’t help but love her as she cuts the dissenters down to size with well-played sarcasm. Bernadette Arvidson’s Evalita is impossible to ignore. She milks her character’s outlandish behavior for all it’s worth. She strides around the stage with boozy confidence like a foul-mouthed Tammy Faye Bakker. Director John Nunemaker gives the chaotic action a sense of focus, and even though there is always something happening in every corner of the stage, it is always clear where to focus your attention. 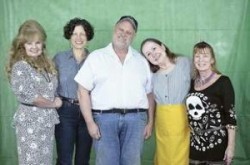 The set design captures the play’s quirky appeal, and makes the setting relatable. The play takes place in 1980s Texas, but could just as easily take place in a 1970s Midwestern town, or in the home of the Beverly Hillbillies. The stage is strewn with collections of teacups, plates, and needlepoint wall hangings. A noisy in-window air conditioner provides the only relief from the Texas heat. A food tray painted with da Vinci’s The Last Supper adorns the wall of the dining room. The furniture looks like the sort of decor artsy college students with a taste for nostalgia might pick up at Goodwill.

While most of the design choices are spot-on, some of the costumes are a bit off the mark. Almost every actor wears a wig— this is Texas, after all. However, Sara Lee, the spinsterish hairdresser, wears a blue beehive that looks more suited to a production of Hairspray. Her costume consists of ill-fitting pants and cowboy boots that make enough noise to drown out parts of the dialogue. Harmony, the hippie with a heart of gold, is dressed without much imagination— he wears a tie-dyed shirt and fringed vest, neither of which shows the sort of wear and tear acquired from months of living in a van.

The play runs a bit too long, and wears out the welcome of some funny jokes. When the characters finally confront their emotions about Daddy’s imminent demise, the play veers uncomfortably into melodrama. It is much more fun watching the characters try to tiptoe around the elephant in the room than watching them break down and reach for the tissues.

While you probably will not shed a tear for the Turnover family’s troubles, you will have a good time laughing with (and at) them. Daddy’s Dyin’ does not have the depth and seriousness of Cat on a Hot Tin Roof, but thankfully, the play lacks the cringe-worthy antics of an installment of Here Comes Honey Boo Boo. The production is more fun than you might expect from a deliberately cartoonish dying-southern-patriarch play, but then again, this coming from a person whose idea of a good time is watching Lawrence Welk.

Advisory: Daddy’s Dyin’… Who’s Got the Will? contains language and subject matter appropriate for a PG-13 audience.

Running Time: Approximately 2 hours and 15 minutes, with one 15 minute intermission.