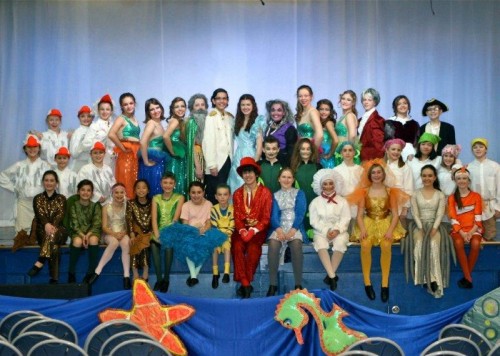 It may be cold outside, but it is warm under the sea at the Aldersgate Church Community Theater’s production of Disney’s ‘The Little Mermaid, Jr.’ now playing through this weekend only.

Under the direction of Michael Page and Corey Latta, the cast of 39 young performers brought smiles to the sold-out crowd. There wasn’t a weak link in the cast. It could be said that everyone in the cast of ‘The Little Mermaid, Jr. was a Star Fish!

Everyone knows about the classic Hans Christian Anderson story about a little mermaid who longs to explore what life is like on land.  So what is The Little Mermaid, Jr.? Quite simply, it is a shorter version of the Broadway adaptation based upon the Disney film.  The music by Alan Menken and lyrics by Howard Ashman are first-rate.  I would rank them up there with another Disney song writing team known as the Sherman Brothers, famous for Mary Poppins, The Jungle Book, and perhaps their best-known song, “It’s a Small World (after all)” written for the 1964 New York World’s Fair. 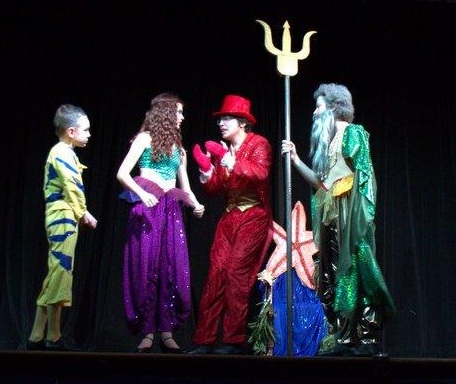 Probably the most well-known song in the show, “Part of Your World” was nicely sung by Emily Flack as Ariel, the little mermaid.  She never belted any of the songs.  Instead, her trained voice performed the songs evenly with a healthy tone and nice vibrato.  The lighting design by Michael Page added a nice touch to this song by adding a pin spot when Ariel sang the lyrics “Wouldn’t I love, love to explore that world up above?”

You don’t have to be the lead in the show in order to make a good impression.  Case in point is Ellen Roberts as the ballet dancing Sea Creature.  Her brief solo ballet appearances in “Under The Sea” and “Kiss The Girl” really added something special to the numbers.  Her dance training also made her suitable as the Dance Captain for the production.  William Havranek as Sebastian the crab showed his strength when he lifted Ellen into the air into a beautiful position during “Under The Sea.” Dressed in a red suit with claw gloves, William was not only strong physically, he was also a delightfully strong actor as the nervous and funny crab, Sebastian. He was especially funny with one-liners delivered to King Triton like, “You give them an inch and they swim all over ya!” 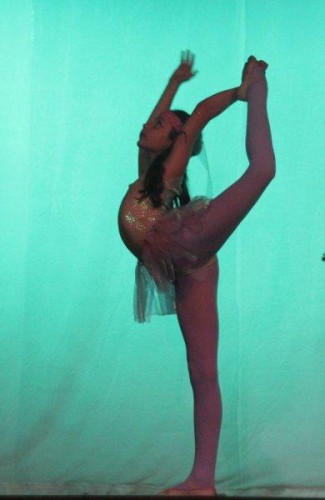 Claire Havranek  is hysterical as the French, fish chopping Chef Louis! The entire chef scene was nicely staged.  Chef Louis was busy chopping fish and putting them into a large steel pot while Sebastian was hiding underneath the table. The laughter from the audience only grew when “The Chase,” a funny scene set to music, had everyone chasing after Sebastian.

Other terrific performances include, Emma Ekman as Scuttle, Stephen Porter as Grimsby, McKenzie Sterner as Ursula, and her two side-kicks, Lucy Roberts as Flotsam and Brendan DeBie as Jetsam.  And let’s not forget about David Jarzen as Prince Eric, J.P. Havranek as King Triton, and Michael Auld as Flounder.  All the mersisters were also wonderful, especially Eleanor Burling as Aquata whose enthusiasm was infectious!

One technical aspect which would have made the production more enjoyable would have been if the actors were wearing body mics.  I was sitting close to the front and had a hard time hearing them speak and sing at times despite the performers projecting as best as they could.

Overall, the Aldersgate Church Community Theater’s production of Disney’s The Little Mermaid, Jr. is a SPLASH!