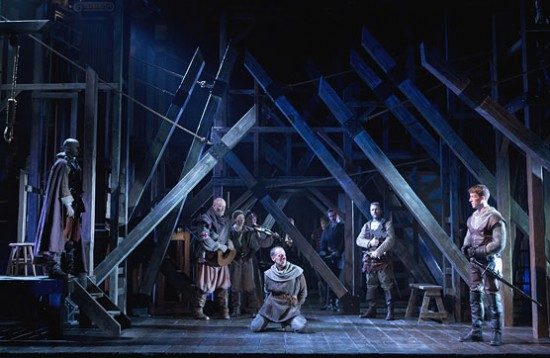 The cast of Folger’s Henry V. Photo by Scott Suchman.

There are many reason why you should put Folger’s Henry V on your must see list of shows this year. Of course, Shakespeare’s war epic is a masterpiece and its language makes English majors tingle in their ears, but this particular production, directed by Robert Richmond with Zach Appelman in the starring role, is quite simply a stroke of theatrical genius.

If there is only one show that you will see in 2013, Folger’s ‘Henry V’ must be that show.

It is not that the production transplants the Bard’s play into some unique setting, suddenly giving the story new meaning; for this production remains in England and then Agincourt where Henry’s long bowmen battle and massacre the French army’s much larger fighting force. It is not that the text or scenes have been altered in any unusual, transformative way; for, even though the Shakespearean text might sound as if it’s been fiddled with, it has not been changed any more than most productions of Shakespeare require some textual choices to be made. And it is not that the themes of Henry V are so uniquely appropriate for the here and now of today’s America that suddenly the tale has become relevant as never before; for, sadly, the struggles of war and the need for unity and courage have plagued the American landscape for more quite a long time. 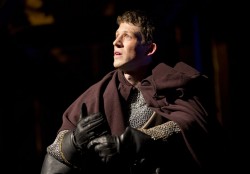 No, what makes this production of Henry V so startling, so fantastic, is the pure breath of humanity that Richmond and his fabulous ensemble of actors have given to its story. This production is so utterly human, in fact, that you will laugh, feel heartsick, gaze bewilderedly, become suddenly uplifted, and then totally distraught all in a matter of hours. In the end, however, you will leave the theatre aware of just how powerful Shakespeare’s Henry V can be.

I have long believed that the art of acting is the study of human behavior. The actor, like some strange combination of sociologist, behavior psychologist, and cultural anthropologist, explores what it means to be a human being in very specific situations.  Zach Appelman gives us King Henry V as we seldom see him—a young man learning what it means to wear a crown. His Henry journeys from uncertain King tested by betrayal, to enraged leader mocked by tennis balls, to battle-weary soldier grieved by mayhem, to the love-struck young man who does not have a clue. The way Appelman handles the text and embodies the character is so totally genuine that you will not have to suspend your disbelief; for he makes Shakespeare’s words so much the King’s and provides such authentic behavior that you will find yourself identifying with this young man in every scene.

The rest of the 13-member ensemble also does a superb job. From the very first moment that they troupe down the Folger’s center aisle singing like a band of traveling players, they transform scenic designer Tony Cisek’s magnificent medieval siege engine into a multi-leveled world of infinite possibilities. Richard Sheridan Willis as Chorus sets the tone of the play. In the spirit of the humble traveling troupe he chats with the audience using a marvelous combination of familiarity and gravitas. For those who do not know play, he tells us that we are about to witness the end of England’s hundred-year war with France. He apologizes for the fact that a tale of such magnitude will by necessity be misrepresented “on this unworthy scaffold,” asking rhetorically “Can this cockpit hold the vasty fields of France? or may we cram within this wooden O [Shakespeare’s theatre was indeed a globe] the very casques that did affright the air at Agincourt?” 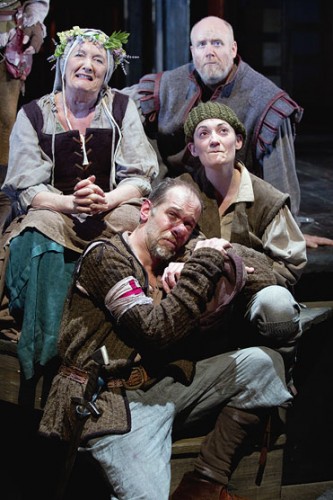 The answer is: of course not. Rather, this production zeros in on ways the stage is most profound: the humanness of our endeavors. Thus, when Catherine Flye as Mistress Quickly enters near the show’s beginning to tell the world of Falstaff’s death, we feel her deep sadness even as Katie deBuys as Boy undercuts that grief with well-placed, if unintentional, jabs of truth. Then, when Michael John Casey’s Nym and James Keegan’s Pistol get into a row over who more deserves Quickly’s affection, we guffaw as Louis Butelli’s Bardolph, with his bulbous red nose, must use his sword to stop the fighting. Later, when Henry must give Bardolph’s order of execution, the weight of that decision could not have been more palpable.

We also witness the stark differences between Henry’s leadership style and that of the French monarchy, particularly embodied by Prince Dauphin, played with wonderful contempt by Andrew Schwartz. His Dauphin exudes over-confidence; yet, the speech about his horse he later delivers to the Constable, played with grimacing patience by Pomme Koch, brought the house down.

Finally, the courtship scene between Henry and Katherine of France, played as well by Katie deBuys, was an absolute gem. First of all, if the program had not informed me of the fact, I would never have guessed that the same actress played two parts, such a transformation deBuys made between the Boy and the charming Katherine. The scene, which in my opinion is one of the most marvelous that Shakespeare ever produced, captures with awkward grace the warrior Henry’s naivete in matters of romance, even as it demonstrates Katherine’s growing comfort with the idea of marrying a man who just slew thousands of her countrymen.

Additionally, I would be remiss if I did not mention the incredible musicianship of Jessica Witchger. Not only did her voice lend the evening’s emotional rollercoaster a solemnity of sound, but her fiddle and harp playing lifted our spirits when we needed it the most. 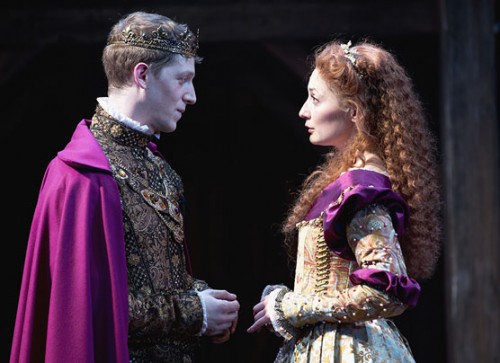 The work of Richmond and his design team brought the horrors of war into focus. Andrew F. Griffin’s lights used Cisek’s scaffolding to create a host of visages supporting the play’s story: from the dramatic slaying of a captured French soldier to the moonlit pensive sentries atop a castle tower to the dancing party-goers in Quickly’s pub, Griffin’s use of shadow and lights was exquisite. Mariah Hale’s costumes had true genuineness, giving each character additional traits and definition. The battle scenes were extremely well choreographed by Casey Dean Kaleba, with the momentary stunning of King Henry by a French battle-ax shockingly real. Finally, the use of sounds, both for mood enhancement and to help establish place, was excellent.

The great irony of Henry V is that even as it is one of the great war plays in Western literature, revealing both war’s monumental courage and—particularly in this production—its terrifying brutality, the play also demonstrates the heartbreaking futility of war, either as a unifier of nations or as a means of conquest. This production brings that irony into sharp focus, even as it delights the audience with its characters, its situations, and its humanity.

I truly think that one could not ask for anything more from the stage. If there is only one show that you will see in 2013, Folger’s Henry V must be that show. Not only will it give you a glimpse of theatrical excellence, but it will also reveal a level of humanity that our contemporary artistic culture rarely brings to light. And in times of peril, is not our humanity the most important remembrance of all?