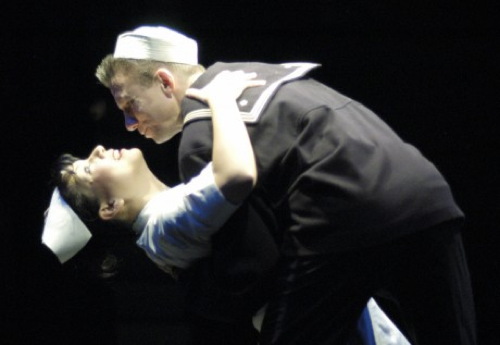 If you want to see a show that is pure fun, the original production of Hot Nostalgia is your ticket. Part of the 34th season at Toby’s Dinner Theatre of Columbia, it is a joyride through five decades of popular music and dance.

As a novice to this theater, I was fortunate to be seated with a couple that has been subscribers for years. The buffet was presented with nearly military precision on what would also serve as the stage. This is an impressive operation, although the tables and seating are a bit snug.

The cast includes many veterans of this theater and some new faces. The actors not only perform in the show, they are part of the wait staff as well.  For a standard theatrical production, not only is this is incredible, but this talented cast sang and danced their way through 85 songs (I counted them) spanning four decades—1930s to 1970—in two fast-paced 45-minute acts. This was a herculean effort. Although rarely was an entire song performed, it is an incredible catalog of music. 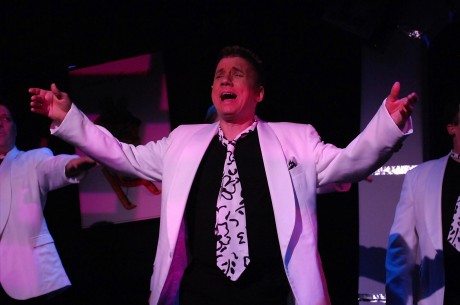 The show opened with the great swing era’s anthem, the 1931 Duke Ellington classic, “It Don’t Mean a Thing If It Ain’t Got that Swing.”  This decade was represented by 12 songs including “Tuxedo Junction,” “Ain’t Misbehavin” and “Sing, Sing, Sing.”  The segment was nicely wrapped up in a bow with a reprise of the opening number before moving into the songs of the 1940s and World War II.  This part of the show was introduced using an audio clip from one of the Donald Duck shorts produced by Disney to support the war effort.  “This Is The Army”started the musical journey with some memorable songs of the war era are including “I’ll Be Seeing You,” “Boogie Woogie Bugle Boy” and “The White Cliffs of Dover.”

The video screens mounted on the back walls of this theater in the round were utilized at a few key moments throughout the production. A newsreel of President Truman announcing the end of WWII is shown while two of the actors recreate the iconic kiss between a nurse and a sailor on V-J Day in New York City’s Times Square.  The kiss is followed appropriately by “It’s Been A Long, Long Time,” introducing the music of the post-war half of the decade.

These screens were then used to transition into the 1950s with a montage of TV commercials and shows such as: Camay soap, Mr. Clean, I Love Lucy and Dick Clark’s American Bandstand.  The cast, dressed in poodle skirts and bowling shirts, start the decade with “Bandstand Boogie” in a soda shop setting.  Among the 17 songs performed, there was a three-song homage to Elvis Presley that segued into a comic bit featuring a class geek singing “A Teenager in Love.”  The cast sang a few novelty songs of time such as “Purple People Eater” and “Itsy Bitsy Teeny Weeny Yellow Polka Dot Bikini.”

It isn’t fair to single out any one performer because it was such an incredible team effort.

The second act began with the decade of the 1960s with its wide-ranging genres and social movements beginning with a trifecta of songs about dance, “Dancing in the Street,” “The Twist” and “Do You Love Me” (Now That I Can Dance).  Two of the female actors did a very funny imitation of Sonny and Cher in “I Got You Babe” then the music shifted to the great girl and guy groups of the Motown sound.  One perfect pairing was “My Guy” and “My Girl.”

The screens lit up again, this time with a clip of Ed Sullivan introducing the first performance of the Beatles on his television show.  Although they gave it their best, the four singers representing John, George, Paul and Ringo didn’t quite pull it off.  Songs from Motown and the British Invasion alternated until another Beatles song ushered in the hippie era with “Revolution.”

After a series of songs representing the peace movement such as “War” and “Aquarius”, the show moved deeper into the 1970s with a clever series of songs with a water theme that represented a spectrum of musical styles.  This grouping was humorously introduced by Allan Sherman’s “Hello Mother, Hello Father,” and included “Rainy Days and Mondays,” “Bridge Over Troubled Waters,” “Black Water” and “Proud Mary.” 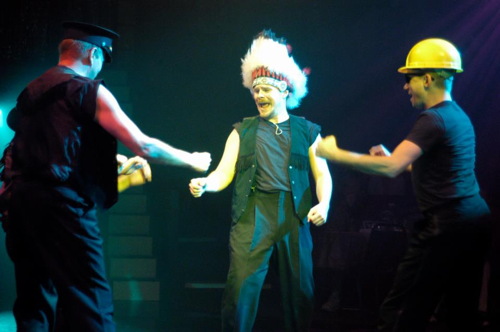 Members of the cast in ‘Hot Nostalgia.’
Photo by Kirstine Christiansen.

There was a nod to the disco era and the woman’s movement with a wonderful vocal sparring between the men and women starting with “I Am Woman” then the men answering with “Macho Man.”   The women responded with “You’re So Vain.”  Elton John’s retro “Crocodile Rock” possibly reminded all of us that in the 1970s, popular culture was also having a nostalgic love affair with the 1950s represented by TV shows like Happy Days and the film American Graffiti.  The show ended appropriately with “Old Time Rock and Roll.”

Costume designer Mary Quinn kept it smart and simple with a basic black outfit for each of the cast and changed up accessories and props–wigs, jackets, ties, skirts–only requiring a few full costume transformations.

The musical director Ross Scott Rawlings and the director/choreographer Lawrence Munsey should be applauded for the monumental job putting this show together–ah, the licensing fees alone! Finding themes and an easy flow between songs and decades was a complex puzzle and they made it work.

Running Time:  90 minutes with one intermission.