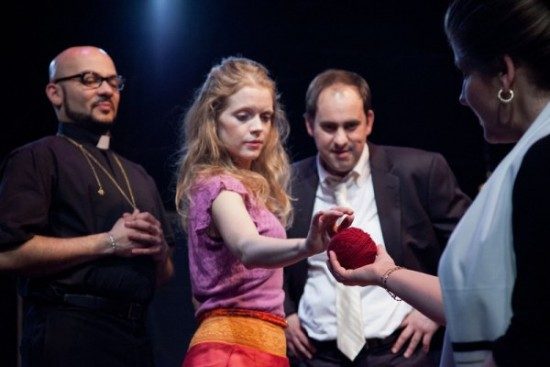 Western theatre has always had a fascination with the stories of the ancient Greeks. In Washington alone over the last few months, we have had We Tiresias, An Iliad, and Pygmalion. But why not? The origins of classical narrative sprung from the fertile Greek imagination. So, in this age where melodrama has supplanted tragedy, where the celebrity has replaced the hero, and where the character-sketch—not the epic tale—has become our primary literary genre, why not venture into that territory of myth and magic? Perhaps there we will find something more meaningful to root for than another American Idol or fading Star on the dance floor.

The use of arena staging was a strong choice…

Anna Ziegler’s The Minotaur, a joint world premiere by Rorschach Theatre and Atlanta’s Synchronicity Theatre (which premiered the show in 2012), does something else that has become popular of late. She plunges into Daedalus’s labyrinth with the intent of, not just killing the Minotaur, but destroying the labyrinth itself, and in doing so reveal something important about life and fate. Unfortunately, when your play’s driving action focuses on freeing your main characters from the narrative history that birthed them, your drama cannot help but become overly esoteric and ethereal. As a result, although your actors strive mightily to give purpose and reality to their characters, they remain more fictional constructs, with no more substance than the host of modernisms they utter—like “Facebook” or “I-phone”—than the fleshy human beings we might actually care about, root for, or even grieve for. 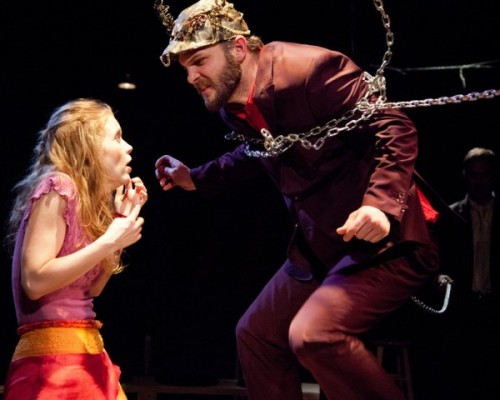 Ziegler’s The Minotaur uses three of the myth’s main characters: the Minotaur of course (David Zimmerman), the half-bull, half-man by-product of his mother’s divinely inspired love affair with a snow-white bovine; the Minotaur’s half-sister, Ariadne (Sara Dabney Tisdale), who like other Greek ladies betrays family for the man she loves; and the legendary Athenian, Theseus (Josh Sticklin) who pursues heroism blatantly and arrogantly. Then, Ziegler creates three narrator/chorus characters, a Priest (Frank Britton), a Rabbi (Jjana Valentiner), and a Lawyer (Colin Smith). Their job seems to be to maintain the more or less traditional arc of the ancient tale, or at least the small sliver of that tale that we are offered in this production.

Ziegler’s version of the story does not require knowledge of the Greek original. In her version, the Minotaur lives at the center of the labyrinth. He eats the people he meets, even though he does not want to. Ariadne has a love-hate relationship with her half-brother. She should be scared of him but cannot help but feel for him. Yet, when she meets the Athenian hero Theseus and falls in love with him, she decides to help Theseus kill her brother and bring her his head.

Randy Baker and his design team have approached Ziegler’s script simply, employing a somewhat “poor theatre” visual style. They elected, however, to downplay the possible “poor theatre” spectacle the story offers. Thus, the tale’s alluring mythical elements are not given substantial material form and, without them, the tension that might have happened between the magic of myth and the reality of everyday life never materializes. The use of arena staging was a strong choice, however, as it lends the script’s narrative structure a visual dynamic that it otherwise does not have. David Ghatan’s spiderweb-like set adds to the play’s abstraction, whereas Stephanie P. Freed’s lights nicely punctuate the movement of the actors. Lauren Cucarola’s costumes place the characters in decidedly modern times, looking as if they were a group of Washingtonians suddenly plopped down in a Greek storyline with a bull-man as the central character.

And that’s the difficulty that I had with this script and this production. As the Minotaur David Zimmerman turns in a strong performance. He is a contemporary man loosed from the world, now suddenly plunged to the center of an elaborate maze. As Minotaur, he is an intensely lonely man with a beast’s drive to devour; his love scene with Jjana Valentine (when she wasn’t the Rabbi but one of the Minotaur’s victims) was one of the few moments in the play where I actually felt empathy for the characters. The bull-mask that he wore, however, ironically lacked the vitality that would have elevated the actor’s well played passion to mythic heights. 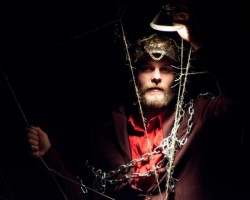 I had the same issue with Sticklin’s Theseus and Tisdale’s Ariadne. Sticklin’s Theseus arrives on the scene with all the cockiness of a Yale graduate and, although Sticklin did a fine job developing Theseus’s narrative arc around his relationship with Ariadne, I was never allowed to know who this Theseus really was. He remained a modern man without a story of his own. The intentions of Tisdale’s character were clear and viable, but because neither the play nor the production gave her any psychological grounding, I did not know who she was either. Perhaps, if she and the other characters had been plucked from the Washington audience by the trio of narrating elders, and then forced to enact this strange story of a bull-man and c**k-sure hero, then I would have felt for their plight and related to their desire to free themselves from a narrative not of their own making.

Ziegler’s play, however, chooses a different route. Her Priest, Rabbi, and Lawyer perform their narrative indoctrination of the modern without intent or purpose, almost as if they were doing it simply because their roles as leaders of society demanded it. Britton’s Priest has all the dignity required of the part, as does Valeniner’s Rabbit, and Smith’s Lawyer is necessarily irreverent; but none of these three protagonists confront the insubordination of the three Greek characters with any zeal. Now, to be sure, Ziegler does not give them much of a chance. So, as a result, we watch the play unfold more as a fictional academic experiment about how to challenge a traditional narrative than as any kind of real life rebellion against the cultural stories that bind us.

Without a play grounded in the real life struggles of people, and without a production grounded in the theatrical flourishes of spectacle, the audience is left with an excessive amount of verbiage, a verbiage without either philosophical substance or the material referents that specific characters in specific places would provide. Without either of those two essential ingredients, the audience leaves the theatre without any emotional or physiological stake in the tale they just watched.