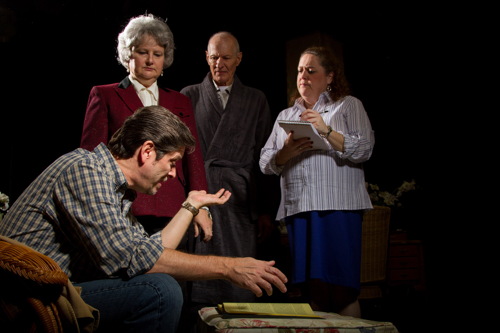 Although the Audrey Herman’s Spotlighters Theatre has for a half century taken on with considerable success some huge challenges like Broadway musicals, its cozy in-the-round venue works much better for dramatic plays.  In making its Baltimore debut, the romantic comedy Rose’s Dilemma showcased four talented actors and an exquisitely designed set do justice to Pulitzer Prize-winning playwright Neil Simon’s final work.

Though not regarded as Simon’s best play by any means, and not to be confused with such Simon-penned mega-hits as The Odd Couple, Sweet Charity and Brighton Beach Memoirs, Rose’s Dilemma opened in Los Angeles in 2003 as Rose and Walsh.  The play moved to off-Broadway later that year under the actual and current title.

Under the skillful direction of Roy Hammond, all the actors turned in a fine job and were well-cast for the roles.

During the previews Mary Tyler Moore, cast in the title role, was reportedly sent a letter by Simon prior to opening night admonishing her for not remembering her lines.  She abruptly quit leaving the part to Patricia Hodges, Moore’s understudy.  The play closed just over two months later.

Based loosely on the love affair between playwright Lillian Hellman (The Children’s Hour, Watch on the Rhine, The Little Foxes) and mystery writer Dashiell Hammett, Simon crafted a play that includes a ghostly element to Rose’s Dilemma. 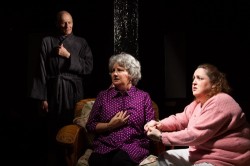 Set at her East Hampton, Long Island beach house, celebrated author Rose Steiner played by Joan Crooks is headed for financial calamity as her assistant Arlene (Brenda R. Crooks) dutifully points out.  Rose has not written a book for a long time as she is experiencing writer’s cramp.  To offer an opportunity to make a considerable amount of money, her deceased lover, Walsh McLaren (Denis L. Latkowski), a heralded mystery writer, returns to earth as a “ghost” or shall we say a figment of Rose’s imagination.

He suggests that a ghost writer, so to speak, be employed to finish the forty remaining pages of his latest novel that was curtailed by his untimely demise from a heart attack.  She would benefit from the royalties, thus solving her money problems.

Though resisting at first, Rose acquiesces and finds another writer of lesser celebrity and success, young Gavin Clancy, played by Steven Shriner, to help finish the book.  He eventually becomes romantically involved with Arlene while the project hits a snag.  Because of unexpected twists in the second act, I will not divulge further plot developments.

Under the skillful direction of Roy Hammond, all the actors turned in a fine job and were well-cast for the roles.  Joan Crooks performed very well as the troubled and hallucinatory Rose.  She is believable, and her dialogues with Walsh and Arlene are spirited and feisty.  The ghost of Walsh McLaren is only seen and heard by Rose even though there are others present.

The repartee surrounding Walsh’s comments is (I hate to admit) reminiscent of the old Topper television series in which the Kirby ghosts are talking to Topper and his responses to them are overheard by others resulting in complete bewilderment.  The laughs in Rose’s Dilemma are mostly generated from such scenes and are packed mostly in the first act.

The conversations seem real even though they are concocted in Rose’s head; so real in fact, they include lovemaking as the “two” go “upstairs” at night.  Their “current relationship” is idealized and romanticized by Rose, which apparently diverges from her earlier experiences with Walsh as the play suggests that all were not sunshine and lollipops when they actually were seeing each other.

As Walsh’s ghost, Dennis L. Latkowski, a veteran of the Spotlighters, had a dominant presence on the stage and used his deep devotion towards Rose in convincing her to retain Gavin Clancy to finish his novel.  Demonstrating his strong voice and comedic touches throughout, Latkowski is very good in this part. 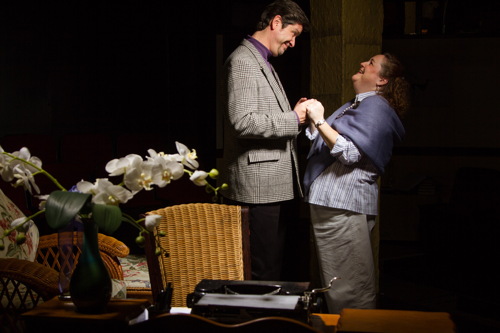 Brenda R. Crooks who is Joan Crooks’ daughter in real life turns in a marvelous performance as Arlene, eliciting empathy from the audience as she struggles to fill the voids in her life.  Her interactions with Rose are dramatic and intense but not excessively so.

The younger Crooks’ moments with Gavin Clancy are tender even if a bit understated.   Steven Shriner as Clancy is likeable and down-to-earth (no pun intended) and played the role of the Heinekin-drinking, lower-end writer quite well.

Credit director Roy Hammond along with master carpenter Dennis Crooks for creating a superb set that beautifully fit the contours of the Spotlighters space.  The painted floor on the stage that perfectly simulates polished hardwood floors is a nice touch.  One of the stage exits was cleverly converted to a sliding glass door that opens up to the beach outside.  Beach-type wicker chairs and lounges with a couple of small desks and bookshelves and an old typewriter constituted the furnishings in the main room where all the action takes place.  And in Spotlighters tradition, sound effects, this time in the form of surf splashing along the shore, added to the ambience.

Rose’s Dilemma is not your typical laugh-a-minute Neil Simon work.  But it is an interesting, easy-to-follow play with second act surprises that along with the strong cast, makes it a show worth seeing.

Running Time. Two hours and 10 minutes with a 15 minute intermission.