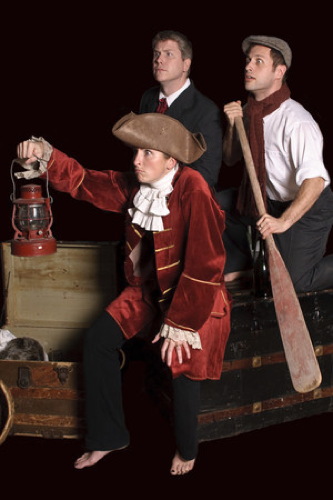 Break out the spyglass and buckle your swash (or is it swash your buckle?), because with a ticket to Colonial Players of Annapolis’ production of Donald Margulies’ Shipwrecked, you will set off on a high-seas adventure that takes you from the deck of a pearling ship, under the sea, to forgotten islands, and back to a bustling Industrial London. Using a vast array of props and costumes, actors John Halmi, Christina Enoch Kemmerer, and Robert Tucker tell the exploits of Louis de Rougemont, a bookish hero whose insatiable curiosity takes him on the voyage of a lifetime.

Louis de Rougemont grows up in 1860s London listening to his mother read him stories of daring adventure, so it is no surprise that at the age of 16, Louis joins a drunken sea captain and his pet dog for a pearling expedition in Australia. The voyage takes an unexpected turn when a giant whirlpool maroons Louis and the dog, the lone survivors of the wreck, on a tiny island. Louis and his canine companion survive encounters with warring Aborigine tribes, ride sea turtles, and perform acrobatics to pass the time. Years later Louis returns to his homeland to find the Industrial Revolution in full swing. He publishes his adventures and becomes a national hero, but soon enough, a group of scientists cast doubt on the validity of his story, and he spends the rest of his days penniless and disregarded as a fraud. The play itself takes place in a 1930s vaudeville theater, with an elderly Louis acting as emcee. In the end, the play asks the question— could the scientists be right? Is Louis’ story true, or is it a figment of his own imagination and invention?

Highly recommended for anyone who likes a good laugh…

The play runs like a well-oiled machine thanks to the talent and sheer perseverance of its three actors. They create ships from ladders and yards of rope, canoes from rolling trunks, and colorful characters from simple costume and vocal changes. Sound effects come to life in full view of the audience. Thunder sounds from a machine operated by levers and cranks. The crumpling of paper symbolizes a crackling fire. It is great fun to watch the actors run rampant on the stage, creating a whole world from tiny details. Stage manager Staci Mehri also deserves a shout-out for the considerable undertaking of keeping track of the hundred-plus props and costumes. 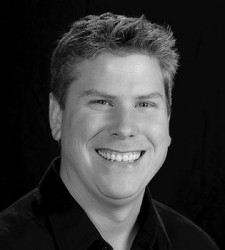 John Halmi steers the ship as Louis, and never loses steam, even though he is onstage for every moment of the action. His Louis shares the familiar enthusiasm of other intrepid heroes, like the Time Traveler of H.G. Wells fame, or Professor Challenger from Arthur Conan Doyle’s The Lost World. Robert Tucker, as Player #2, brings each of his many characters to life with exceptional physical clarity. His best moments are as a lovable dog, an Aborigine chief, and a rotund tribal woman seeking Louis’ affections (complete with grass skirt and coconut-shell top). Christina Enoch Kemmerer plays Player #1, and is at her best as the young Aborigine girl who steals Louis’ heart.

The production has consistent clarity until a moment in a final, crucial scene. Louis’ descent into notoriety begins as two scientists heckle him with questions, demanding he explain the exact details of his adventure. The actors, wearing masks, break out into a sort of interpretive dance, forming abstract shapes with their chairs as they berate Louis. All of a sudden, the play seems less like a 1930s vaudeville act and more like a pretentious piece of 1960s performance art. If director Ron Gidding’s purpose for the break in style was to alienate the audience, it worked, but not the way he intended. I can’t speak for the other audience members, but I lost interest in what was happening onstage and started thinking, is this really necessary? When the script suggested I ought to be empathizing with the hero, why was the director forcing me to abandon my emotional involvement? Rather than raising questions about the characters or ideas within the play, the interpretive dance moment showed the director’s hand, and felt deliberately manipulative.

Aside from one unnerving deviation, Shipwrecked has all the charm and adventurous spirit of the classic adventure novels its protagonist adores. Highly recommended for anyone who likes a good laugh, or anyone whose bookshelf teems with the likes of H.G. Wells, Jules Verne, and storytellers of that ilk.