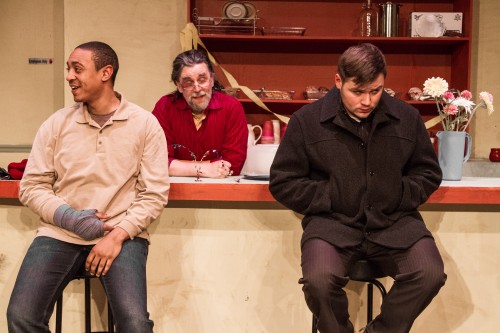 “Superior Donuts is about opening up to your fellow man in a way that is generous to the receiver and important to the giver.”

This is how the playwright Tracy Letts explains his play but there are many more layers to this story. Full of humor and poignancy, Donuts is about community, friendship, dreams lost and reimagined and redemption – all played out in a small, rundown donut shop. Fells Point Corner Theatre opened its production on Friday, January 11, 2013 and it is a delight.

The story is set in the modern-day Chicago neighborhood of Uptown that has seen its good days and bad, but may be on the verge of another renaissance – a Starbucks has opened across the street and it is competition for Arthur Przybyszewski (Phil Gallagher).  Frozen in the 1960s with his pony tail and tie-dye shirt, he owns and runs Superior Donuts, a shop started by his father in 1950 when he and his wife came to America as Polish refugees after World War II. Arthur is a passive and private man who has spent most of his life running away, literally and figuratively.

Like the sweet confection that is its namesake, ‘Donuts’ is a wonderful production…

Another lead character is the Russian Max Tarasov (powerfully played by Jeff Murray with an impeccable accent) who has opened a video store next door.  He is part of a current wave of immigrants and has very BIG dreams; he wants to buy Arthur’s shop and expand his business but he is first and foremost his friend. When Max reports an incident of vandalism at Superior Donuts, we are introduced to the comic, bickering partners, Officer James Bailey (a wonderful William Walker), a big Star Trek: Deep Space Nine fan, and Officer Randy Olsteen (Lynda McClary) who is completely smitten with the clueless Arthur. The scenes between Officer Olsteen and Arthur are at once funny and heartbreaking. McClary gives her character soul and sweetness behind the tough cop exterior.  Thrown into the mix are daily visits from the local bag lady that comes in for her free donut, Lady Boyle with her own sad tale, but she is a survivor. Natalie Chávez Leimkuhler’s portrayal of Lady Boyle could easily break your heart. 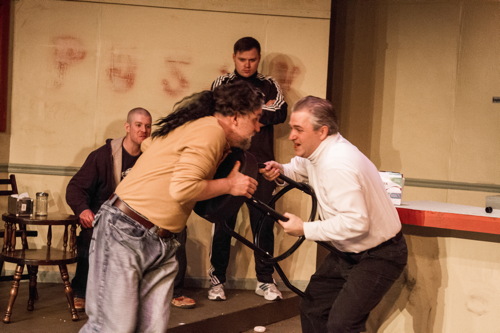 Insight into Arthur’s world is provided when he steps out of the scene and speaks directly to the audience to deliver a series of monologues throughout the play.  The first time this happens it is a bit jarring, but Gallagher does a wonderful job of letting you into the character’s past that shaped who he is; disillusioned and flawed, but a decent man.

The other character at the center of the story is Franco Wicks (Christopher Jones).  Franco is a bright, young Africa American man who sweeps into Arthur’s world and fast-talks himself into a job at the shop. Franco is always moving—brimming with energy and ideas to improve the shop as well as enlightening Arthur about Officer Olsteen’s affections and providing tips on courtship.  Jones is so appealing as Franco that it is hard not to be caught up in his exuberance.

Unfortunately, Franco is dealing with some serious issues beneath that sunny exterior; he has dropped out of college and has a $16K gambling debt. But he has finished writing his “great American novel” that is contained on every piece of paper that he can find and is currently wrapped up in string.  This is his ticket out of his problems. Arthur reads his novel and gets excited by its potential; he comes alive with his own ideas to help Franco publish the book as well as bringing new changes to his shop.  He is even making small strides with Officer Olsteen. But soon, Arthur is overwhelmed by his old fears and hopelessness; he pushes Franco away by telling him dreams are just fantasy and to grow up.  When Franco does not show up for work, Arthur soon finds out the reason why.

Redemption for Arthur comes in the form of a bookie, Luther Flynn (Robert Scott Hitcho plays him with deceptive, snakelike charm) and his henchman, Kevin Magee (a superbly scary Andrew Porter).  They have made good on their promise to hurt Franco if he didn’t pay his gambling debt; he is now in the hospital. This is a moment of truth for Arthur who has clearly become attached to this young man. He wants to pay the debt but more than that he wants to fight Luther, man to man.  Max and his hulking young nephew, Kiril Ivakin (Denys Petrov, who makes a very small part very important), keep guard over Kevin while the two middle-aged men slug it out.  As comic as this scene is, Arthur is fighting as much for himself as he is for Franco.

The direction is solid and the set sparse but fits with the desolation of Arthur’s life. Lady Boyle’s bag lady costume is wonderfully inspired.

Race is dealt with but sometimes it seems contrived particularly when it comes up after the fact in Arthur and Franco’s relationship. Though at times formulaic and somewhat cliché, the play is full of laugh-out-loud moments amid the underlying drama. Like the sweet confection that is its namesake, Donuts is a wonderful production with a satisfying (yet predictable) ending filled with hope and promise.