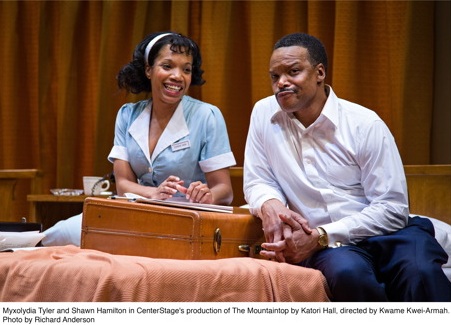 It’s a familiar scene to any modern audience—a man, a woman, a motel room.  Indeed, at first glance, The Mountaintop, now playing at Center Stage, mimics countless other dramas that have come and gone from the American stage.

Don’t let that fool you.

What follows is a truly extraordinary piece of theatre—in both content and execution. Playwright Katori Hall takes a refreshingly bold look into of one of America’s darkest moments, filled with plot twists, personal anguish, and, perhaps most surprisingly, laughter. The show, which recently won an Olivier Award for Best New Play, follows Dr. Martin Luther King, Jr. and the motel maid, Camae—who proves exceptional in her own right—on the night of April 3, 1968, the eve of Dr. King’s assassination in Memphis Tennessee.

It is exceedingly well-written, and the artistic team, under the direction of Kwame Kwei-Armah, has done it complete justice.

Without revealing the play’s major theatrical conceit, let it suffice to say that Hall strikes an ingenious balance between the macrocosmic political consequences of the moment and the high-stakes, personal consequences for these two individuals. Their sexual tension is held skillfully aloft through the show’s conclusion, and the subtext of desire underlies their every move.  It is exceedingly well-written, and the artistic team, under the direction of Kwame Kwei-Armah, has done it complete justice. 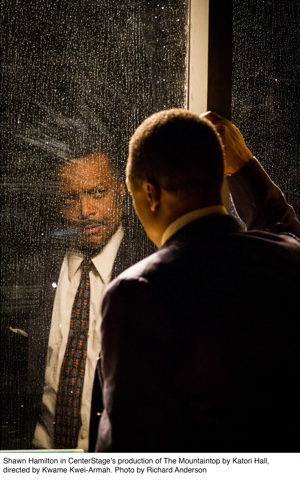 Simply put, Shawn Hamilton’s portrayal of King is amazing. He manages to navigate the play’s intricate maze of humor and humanity with a natural precision. He is well-matched by Camae (Myxolydia Tyler), whose intoxicating self-confidence and wit explodes through her thick (and, occasionally, wandering) Tennessee accent.

The design, too, draws the audience in, with a creatively ominous backlight (Scott Zielinski) and underscore (Victoria Delorio).  The motel room (Neil Patel) is picture-perfect 1960’s—a sea of yellow, orange, and brown, with rain streaming down the window (a reminder of the real and metaphorical storms raging outside).

To its credit, The Mountaintop has something to say without ever seeming too heavy handed. Hall discards our romanticized vision of King, and, instead, portrays him as a living, breathing (and lying, cheating, and chain-smoking) man, who worked miracles on earth with bravery and perseverance.  Stripped of his sainthood, he reveals his basic and remarkable humanity, and under every flirtation and proclamation is the deep sadness of a man who will not live to see his dream come true.

Running Time:  90 minutes, with no intermission.