Theatre Review: ‘To Kill A Mockingbird’ at Fauquier Community Theatre 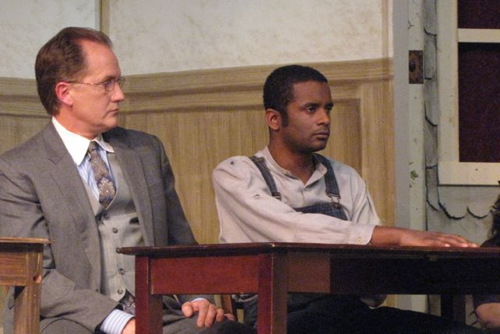 Most fans of literature and the theatre already know the timeless story of Atticus, Scout, Tom Robinson, and Boo Radley.  For those that do and those that don’t (shame on you!), an evening at Fauquier Community Theatre provides an enjoyable trip down memory lane as we relive one of the best pieces of literature from the 20th century.

To Kill A Mockingbird is a classic story of a depression era summer that changed the lives of a family and their neighbors forever.  Scout and Jem Finch begin to leave their childhood innocence behind when their father, Attorney Atticus Finch, is selected to defend a black man, Tom Robinson, who is unjustly accused of rape.  Fighting against ignorance and prejudice, we follow the Finch family and their friends as they help one courageous man’s fight for the truth.

The set, designed by Director Nancy Daugherty and her crew of technicians, recalled a sweet and nostalgic era – the perfect background for such a moving tale.

Maria Luetkemeyer (Scout) and Michael D’Arcangelis (Jem) set the scene in the 1930s idyllic South as they explore their neighborhood, get in and out of fights, and ponder life’s bigger questions.  Rhett Walters plays an unusually astute Dill, knowing both a range of emotions and his character’s motivations.  Walters also deserves applause for his fine diction – a rare trait in such a young actor. 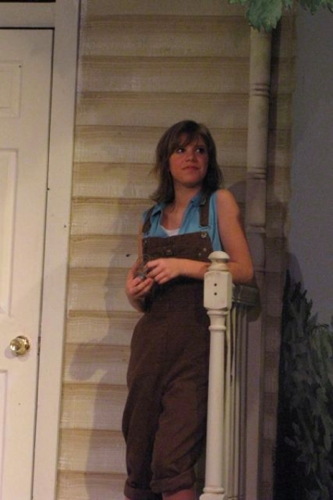 Jim Constable played a fatherly and pensive Atticus Finch with excellent presence.  Constable is an actor who knows his body well and maintained a strong sense of character throughout.  Fans of the play most look forward to Atticus’s courtroom speech and Constable delivers with an impassioned address to the jury that left the audience eerily still.

A good choice was made by including a moderate-sized crowd in the courtroom scene, which provided a realistic feel to those segments.  However, ad-libs during those scenes should be kept to a minimum, as audiences should never laugh during Atticus’s closing argument.

The most remarkable performance of the night belonged to a young woman who was not listed in the playbill.  Bella Cardine, originally set to play Mayella Ewell, came down with influenza and was unable to perform.  The role was taken over by her sister, Mikal Cardine, who had begun studying the part a mere 24 hours earlier.  Not only did she flawlessly deliver lines whose accuracy was absolutely crucial to the coherence of the trial and Atticus’s arguments, she stayed engaged throughout the entire courtroom scene, visibly trembling on the bench.  The passion that she cultivated in such a limited amount of time was truly breathtaking.

The set, designed by Director Nancy Daugherty and her crew of technicians, recalled a sweet and nostalgic era – the perfect background for such a moving tale.  The staging provided some challenges, especially for the younger actors who accidentally upstaged themselves, but the cast made good use of the space available. The lighting, designed by Time Kirk and Kirk Noé, allowed the audience to really feel the sultry summer days and the chill of the stormy night as Scout and Jem wandered through the woods.  Most artistic was the lighting change mirroring a setting sun after the verdict was handed down in the courtroom scene.