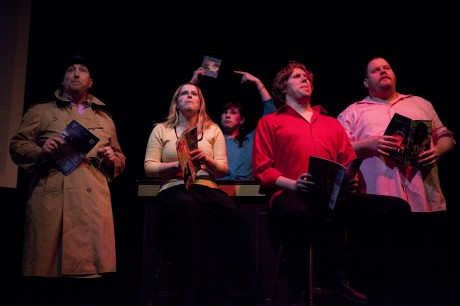 The cast of ‘Tomfoolery.’ Photo by Matt Rose.

Just slightly askew,
Dark but not blue,
Tom’s foolery might be
The odd outing you view…

Elden Street Players, a bastion of quality theatre in Herndon-Restonburbia, opened its decidedly offbeat Tomfoolery recently.  The show is a compendium of misplaced and mordant song lyrics from Tom Lehrer, a colorful thinker and entertainer who gained a following with the bourgeoning counter-culture of the 1950s and 60s. A mathematician by trade, he used both sides of his brain. He studied piano as a child, gained advanced degrees in the sciences, entertained fellow collegians with show tunes, and served in the military as an enlisted man before returning to academia at Harvard and MIT. His songs range from a bit dark to anti-establishment, though fairly tame when viewed with today’s lens.

This production glides through Lehrer’s songs in absolutely no apparent order or theme, with hilarity, bad puns, good rhymes and several wait-a-minute insights. A cast of five steps up in fine form to interpret the foolishness—Becca Harney, Matt Williams, Matthew Scarborough, and Matthew “Moose” Thompson, with Caroline Simpson in a supporting dancing role.

And lest we forget our music director and piano player, Tom Fuller (bearing a remarkable resemblance to singing political satirist Mark Russell), who added well timed background information to Tom Lehrer’s life and the turbulent social times he was dealing with, such as noting that Lehrer once commented that “awarding the Nobel peace prize to Henry Kissinger made political satire obsolete.”

One early Lehrer Classic is “Poisoning Pigeons in the Park.”  Mr. Thompson and Ms. Harney are a couple enjoying a spring day, but are, uh, spreading more than breadcrumbs.  Their comic timing is excellent in this hilarious, oogie moment. It has a Sweeney Todd aspect to it.

Thompson also performed “The Hunter” with great comic chops. A broad fellow, he was shoehorned into a tight hunting jacket and matching hat, and, he just shot everything in sight, with no qualms. Wait, that could be a topical issue.

Other notables are “The Elements,” by Mr. Scarborough, which has him singing the periodic table in a patter tune from Gilbert and Sullivan– rapid-fire and ingeniously arranged to rhyme.  He also performed with Williams the song “New Math,” a hilarious look back at those frustrating days of base 10 and 8.

The social awareness came out in the cast’s renditions of  “Wernher Von Braun” and “We Will All Go Together,” covering the Cold War and Nuclear Armageddon  “Once the rockets are up, who cares where they come down? That’s not my department, says Wernher von Braun.” (‘And there’s no more misery… when the world’s a rotisserie.’) 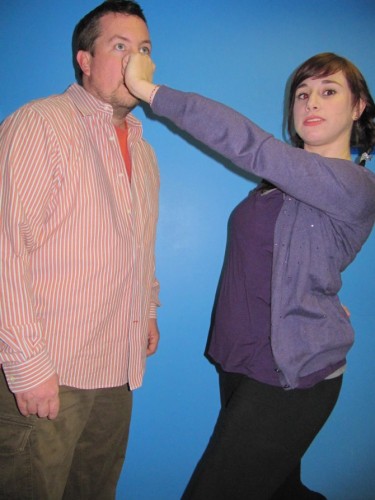 Ms. Harney, the female soprano filled the stage with energy, if not complete comedic range. Her “Irish Ballad” was a lilting tale of a cute gal turned into a Lizzy Borden impersonator and showed fine range.

Williams performs “The Masochism Tango” with gusto, gyrating on the floor, replete with riding crop and acts of self-flagellation, and Simpson ably assisting in gentle acts of suggestion. Cute, but loses shock value in 2013.

“National Brotherhood Week” was a personal favorite as it dealt with the insanity of trying to institute behavior.  “Be nice to people that are inferior to you, you hear? Just be grateful that it doesn’t last all year…” Sometimes parody makes us see how preposterous we sound and how we do take ourselves way too seriously.

Director Adriana Hardy (and Producer Susan d. Garvey) provided a smooth seamless show that accentuated the actor’s strengths and voices and allowed the material to drive the fun.

Ultimately, Tomfoolery should be viewed with a way-back machine. It is a time capsule into the original anti-establishment movement questioning our values and accepted ways of looking at life. It is a rib-tickling preservationist effort, and should be required viewing for students of counterculture, past and present. And especially those in the audience who lived through it.

Running Time: 1 hour and 40 minutes with an intermission.