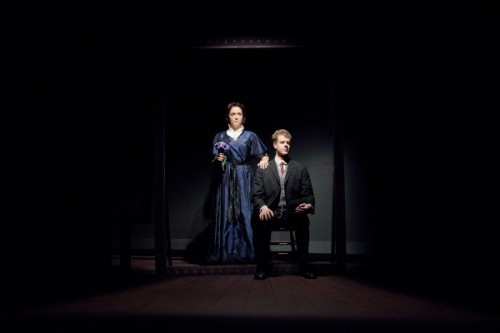 On a staged draped in ornate frames, lone objects fill empty spaces, still lifes of what’s to come—here a peacock feather adorns a lady’s hat, there a kettle catches the light, here a majestic Victrola awaits, there a china teapot rests atop a satin cloth.  In Tryst, by Britain’s Karoline Leach, the steady hand of Washington Stage Guild fills the stage with portraits of two lives, envisioned and revisioned in fragile moments that a moment will reverse.

…a cautionary tale whispering of the redemptive power of truth and the terrible potentiality of love.

Dramatically lit by Marianne Meadows, Tryst is bathed at times in chiaroscuro—that Renaissance, Vermeer-esque word for the play of light and shadow on a face, a form, a still object.  Tryst is a study in bold contrast, of two voices parleying points of view: the pragmatic vs. the fantastic, the mundane vs. the extravagant, truth vs. illusion.

As the play begins, Mr. George Love (Felipe Cabezas) and Miss Adelaide Pinchin (Emily Townley) stand within the largest frame for a life-sized portrait and begin, in intimate asides, to reveal the contrasting details of their lives.  She is a quiet, unmarried milliner relegated by her plumpness to the hat shop’s back workroom; he, a dapper young con artist adept at wedding, bedding and decoupling unsuspecting lasses from their meager life savings. 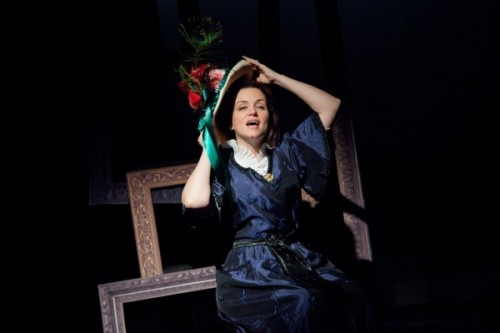 Confiding in the audience with breezy, conspiratorial asides, Love choreographs his every seductive move, always with an eye on his escape via a train bound for somewhere, anywhere, he tells us, away from the broke and broken hearted victim of his latest con.  Felipe Cabezas imbues Love with a winking amorality, chiseled to insidious perfection by his impeccable style, the ease of his deception, the financial urgency of his next conquest.

Beautifully played with subtlety and conviction, Emily Townley’s Adelaide Pinchin is a modest woman of some 38 years, who, Moll Flanders like, tallies up her worldly wealth—her aunt’s cherished diamond brooch, her £50 of hard won savings—and dreams of a brighter day.  She has plans, she tells us–she knows exactly how she’ll spend her 50 quid.    Adelaide ventures forth one day to the front of the hat shop and, stepping into the crosshairs of George’s syncopated seduction, she catches his eye, and Love’s game is on.  George Love, true to his scheme, sets his next sight on Miss Pinchin, whose spinster heart is ripe for the taking.  And indeed, at first all goes according to Love’s despicable plan:  they wed secretly, unbeknownst to Adelaide’s  parents with whom she lives; she retrieves her bank book at George’s request; and off they go to a boarding house in England’s Weston-super-Mare seaside resort for a storied nuptial celebration.

A comic, cat-and-mouse variation of a honeymoon ensues, endearing us even more to the quick-witted, trepidatious Miss Pinchin (whose girth, we are told, has rendered her a spinster, though–while she plays the role with absolute conviction–the lovely figure of Miss Townley stretches the credulity of such an assertion.)  Winding up the Victrola, they dance, two lonely souls gliding across the floor with the same timeless elegance immortalized in Athol Fugard’s Master Harold and the Boys.

The plot thickens. All is not what it seems. There is more to their stories than their circumstances suggest. Like nocturnal weavers in a fairy tale, they entwine and unravel and reweave the narratives of their lives, surprising themselves, the audience, and each other, until with a final twist, the play ends.  The contrast of light and shadow deepens on the stage, and the modernity of the 20th century dawns.

In director Kasi Campbell’s capable hands, Tryst—set one hundred years ago in 1912—unfolds as an enigmatically contemporary play.  Like still objects in a painting, the intimate details told to us by Adelaide and George portent the same opposing views of a worthy life that so inform our societal discourse today. 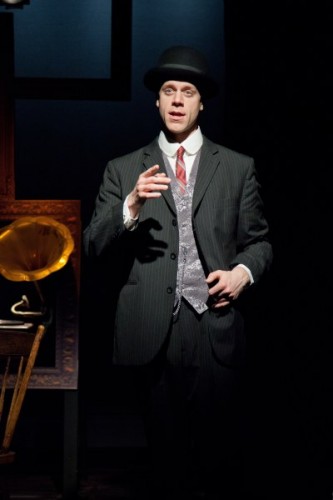 For Adelaide, it is a cup of tea, a bit of bread pudding, and her own imagined version of a sensible modest life made possible by the best in each of us—is this not worthy of a dream? we ask ourselves.  For George Love, however, extravagance calls.  Glamour and exclusivity define the worthy life.  “You can get away with anything,” George tells us gleefully, “when you’re exclusive.”  The soon-to-be-notorious George Love is a man, it would appear, hell bent on dragging a mundane, prudish 19th century into a glittering, amoral 20th.  Indeed, the ruthlessness of his sensibility foreshadows the cynicism and predatory habits of our own age of aspiring elites, capable of bringing our economies to the edge of collapse and beyond in modernity’s perpetual pursuit of excess.  Crisply directed by Kasi Campbell, Tryst becomes a cautionary tale whispering of the redemptive power of truth and the terrible potentiality of love.