Theatre Review: ‘We Tiresias’ by Stephen Spotswood at Forum Theatre 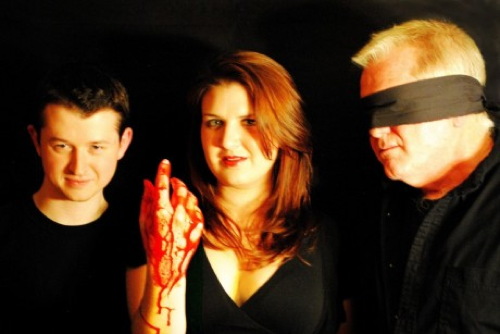 Stephen Spotswood’s We Tiresias, presented at the Forum Theatre, is a lyrical reimagining of a classic Greek character. Three actors portray the blind seer at three different stages of his life. While the concept is intriguing, the production feels more like an exercise in style than a compelling character study.

The story itself is not lacking in substance. The play opens with an elderly Tiresias imparting his wisdom to Oedipus (no stranger to misfortune, himself). After some prodding, Tiresias launches into a tale spanning generations, from his early days as a young man born with visions of the future, to his transformation into a woman who becomes the paramour of a bandit king, to his present days as a blinded, sexless elder living a hermetic life. His transformations in age and gender are the work of the gods, as punishment for his “gift.” The actors—Will Aitkin, Melissa Marie Hmelnicky, and Chris Stinson— also portray Tiresias’ lovers, mentors, and oppressors.

Overall, the production has the makings of a poignant tragedy. Director Matt Ripa makes bold, evocative choices in this production. Early on in the piece, as Tiresias describes the moment of his conception, two supporting actors create visions of constellations with hand gestures and lit candles. An eerie ringing noise accompanies Tiresias’ visions, created by an actor running a finger over the lip of a wine glass. The ripping of a long red cloth depicts his castration, and the climactic moment when he gouges his eyes out… well, that deserves to remain a surprise.

The language is most effective when it is visceral rather than imagistic. Tiresias foresees the punishment of his lover and exclaims, “The crows will peck the blue from your eyes.” The playwright creates an original, consistent method for describing Tiresias’ visions. Tiresias sees the future in the natural world and the minute physical details of the people around him. 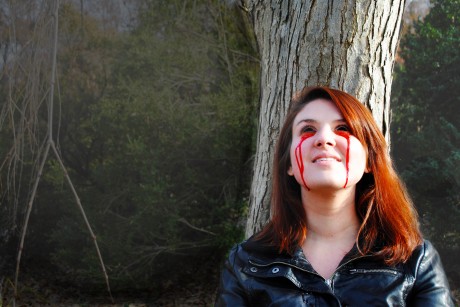 We Tiresias loses momentum in the construction of the script. Heightened language creates the world of the play, and the result is a loose conglomeration of images that are appealing, but lack intention. The dialogue exists in a world that is neither archaic nor modern, and sounds more like the recitation of a poem or an introspective journal entry. The stakes are not high enough to generate more than a vague interest in Tiresias’ woes. He desires to put an end to his visions, but he takes no action to stop them until he plunges out his eyes, more than halfway through the play. The text focuses on his reflections, and does not allow his desperation to build.

The secondary characters are more colorful than Tiresias, who does not change much from transformation to transformation. The actors, though talented, are forced to pursue unclear objectives through metaphors without an underlying need to get anything from an opposing character or force. The combination of languid text and low stakes adds up to a shallow experience, and the piece does not pose intellectual questions in place of a satisfying emotional catharsis. Is there hope for the future, or is humanity doomed to a tragic existence? Tiresias believes that humanity is doomed. His manner is more instructive than inquisitive, suggesting that his perspective is the only way the audience can perceive the story. Have the gods cursed him, or is he the architect of his own destruction? Tiresias takes no stance on the matter, perhaps leaving the audience feeling uninspired to decide for themselves.

While the play lacks a satisfying structure, you won’t spend the whole night looking at your watch. Credit is due to the director and actors for bringing life to the prosaic text. We Tiresias shows potential in its superb concept, but the colors come out in the wash of glossy text.

Advisory: We Tiresias contains language and subject matter appropriate for a PG-13 audience.