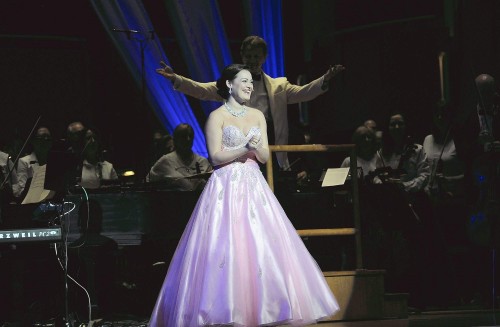 Ashley Brown with Jack Everly and the BSO. Photo by Jimmy Asnes.

During this performance she captured the heart and soul of the audience, performing with the Baltimore Symphony Orchestra under the deft direction of Jack Everly. The good news is that there are more opportunities to see this sparkling performer at The Meyerhoff Symphony Hall in Baltimore this weekend.

Ashley Brown is a powerhouse talent, exhibiting not only her amazing vocal range, but also her acting and dancing abilities.

The professional relationship between Mr. Everly and Ms. Brown goes back to when he spotted her talent as a recent college graduate. The rapport and mutual respect are clearly evident throughout the performance.

I had the pleasure of seeing Ms. Brown on Broadway as the iconic Mary Poppins in the role that she originated there and for which she received Outer Critics, Drama League and Drama Desk nominations for Best Actress and won a 2010 Garland Award for Best Performance in a Musical in Los Angeles.

Ashley Brown is a powerhouse talent, exhibiting not only her amazing vocal range, but also her acting and dancing abilities. She tells her stories with warmth and humor and each song is presented like a mini-Broadway performance with gorgeous costumes and staging. Ms. Brown even has her own chorus of three very talented young men (Matt Branic, Joseph Perkins, Jr. and Bret Shuford) who accompany her in several songs.

The program opened with the BSO playing a medley highlighting the music from Broadway shows featuring great female roles: “Nothing Like a Dame,” “Mame,” “People,” “Don’t Rain on My Parade,” and “Hello Dolly.”

Ms. Brown began with “With A Song In My Heart” and “Just in Time” followed by a clever (with a Carribean/reggae spin) medley of  “Smile” and “Make Someone Happy.”

The BSO then performed a medley of Chicago tunes to allow for a costume and mood change. Ms. Brown returned escorted by her chorus of men in top hat and tails. Then a wonderful flapper costume was revealed. She exhibited her full range with a song from the film “Victor, Victoria” made famous by than none other than the original Mary Poppins herself, Julie Andrews. 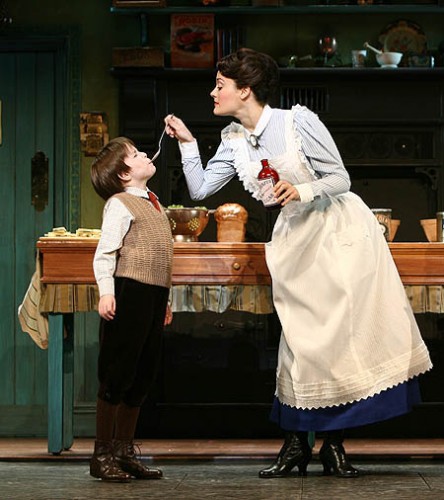 When Ms. Ashley returned again in another glorious costume designed by Clare M. Henkel, she explained her journey and association with the Disney organization with her role as Belle (originally “bombing” the first audition but ultimately given a rare second chance) in Beauty and the Beast on Broadway, followed by winning the role as “ Mary Poppins.” She then sung her favorite song from that production, “Feed the Birds,” with haunting beauty and delicacy. With another quick costume change, the BSO and Ms. Brown ended the first half of the program with an extensive medley of Disney songs, each done in a vocal and acting style appropriate to each song, showcasing her amazing versatility.

The second half of the performance opened with the very funny “Ring Them Bells” acted out with Matt Branic, Joseph Perkins, Jr. and Bret Shuford.  “Bells” is about a gal’s search for love and finding the boy next door by taking a trip around the world. This was followed with a beautiful, operatic version of “So In Love” from Cole Porter’s Kiss Me Kate arranged by Mr. Everly.

Mr. Everly then spoke of his admiration for the talent of Ms. Brown and introduced the three gentlemen that would join Ms. Brown for a medley of iconic Broadway love duets. Selections included “Falling in Love is Wonderful” from Annie Get Your Gun, “People Will Say We’re in Love” from Oklahoma, “Tonight” from West Side Story, “All I Ask of You” from Phantom of the Opera, to name a few.

The real show stopper came with the finale. Ms. Brown, returning in a stunning black gown, sung “Defying Gravity” from Wicked and was as spectacular a version as I have ever heard. Ashley Brown is an extremely dexterous singer and performer and the joy she has for her craft is infectious. She was rewarded with a standing ovation from an audience clearly dazzled by her talents.

Ms. Brown returned the favor with a special encore as she introduced the love of her life and sang “My Funny Valentine” to him. I won’t give it away but it is a delight! This is a show truly for everyone and it is rare treat. Bring the whole family and spend a magical evening with Ashley Brown.