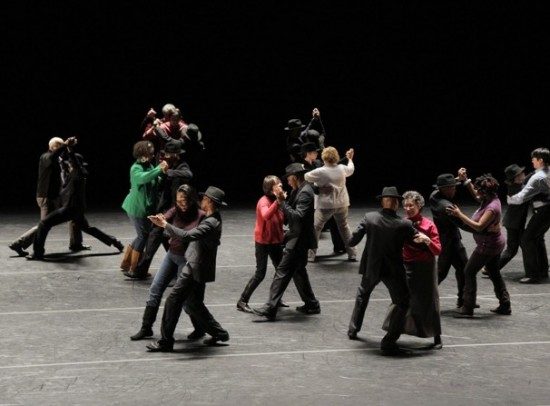 AAADT in Ohad Naharin’s Minus 16 with audience members. Photo by Paul Kolnik.

To anyone in the 20th century with exposure to the world of modern dance, the words Alvin Ailey most likely have significant meaning.  I myself remember being sat down as a college freshman to watch and analyze a 1975 recording of Ailey’s famous Revelations.  Thus, taking my seat in the Opera House of the Kennedy Center and preparing myself to watch a live, 2013 performance of the Alvin Ailey American Dance Theater was a little bit like preparing myself to meet the Easter Bunny; I couldn’t believe it was actually happening.

…a grace of movement that was hypnotizing and humbling, breathtaking yet natural.

Alvin Ailey graces us in Washington as a part of a 21-city tour under its third Artistic director, Robert Battle, who was appointed in 2011. Founded in 1958, the company was deemed “a vital American cultural ambassador to the world” by the US Congress in 2008. Fittingly, Tuesday night’s opening show presented works from three choreographers, each speaking from a different culture and era.  While they did not overlap in theme or mood, there was irresistible dynamic flow in the evening’s choreography. 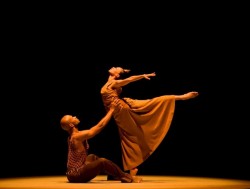 Petite Mort (1991) from Czech choreographer Jiri Kylian kicked off the evening.  Set to two of Mozart’s piano concertos, this ballet of duets commented heavily on the intricacies of hetero-gender relationships.   Four lightly costumed (and heavily muscled) men open the piece in simple yellow lighting, each holding a fencing foil.  What begins as a warrior-like training scene evolves into an increasingly complex series of duels between male and female pairs.  Using the pliable foils as appendages, Kylian’s choreography uses stunning shapes and movements of two figures, aptly alluding to themes of sexual tension and biological obligation between the sexes.

The second act, Ohad Naharin’s Minus 16 (1999) bore staunchly different intentions.  Much to the confusion of the audience, the clarifying of this intention began during intermission, as a lone male dancer improvised on stage in a tuxedo.  It was soon we realized that Minus 16 differed from Ailey’s typical repertoire, specifically in its utilization of improvisation and audience involvement.  After a thrilling repetition sequence of 20 company members to the beats of techno music, which boasted the dynamic musical score, audience members were handpicked, brought on stage, and engaged in an impromptu dance lesson with company members. 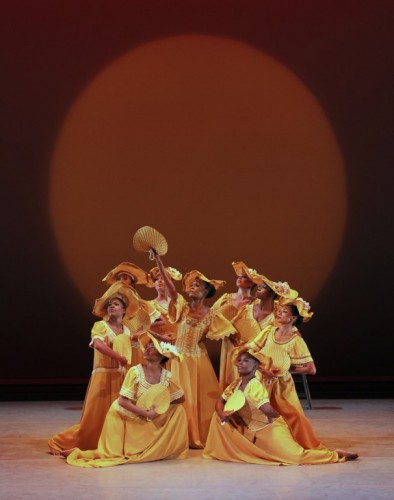 Revelations (1960), choreographed by Alvin Ailey himself, took the stage in the third act.  Inspired by his “blood memories” of Texas and the southern experience, this legendary work is embellished with several pieces of gospel music, such as “Didn’t my Lord Deliver Daniel” and “Rocka My Soul in the Bosom of Abraham.” Regardless of having seen the work before, I was fully engrossed by the willowing white dresses in “Wade in the water” as well as the psychedelic colors in “Sinner Man.”

Needless to say, the performance lived up to all my expectations.   The Ailey company, known for their impeccable technique and style, exhibited a grace of movement that was hypnotizing and humbling, breathtaking yet natural.  This feat I would hold unattainable for just about anyone else.  Bravo.

Alvin Ailey American Dance Theater will be performing at the Kennedy Center in Washington D.C. until February 10th.  For tickets and more information click here.