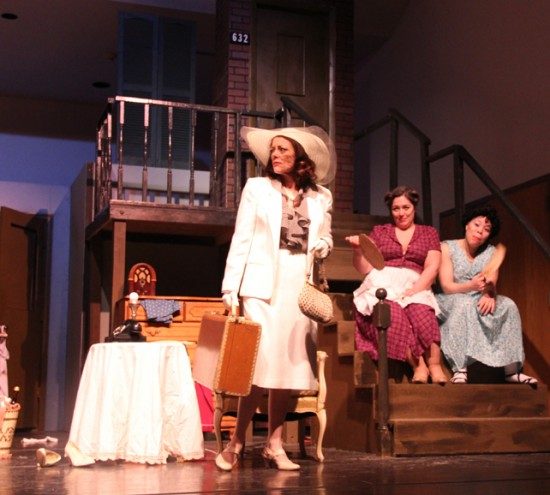 Blanche DuBois (Kitty Harger) makes her appearance in the Quarter to the amusement of the neighbors (Vicki Cline and Zaneta Walthour). Photo by Larry Carbaugh.

It is always an encouraging sign when community theaters are willing to tackle some of the drama’s most famous and famously difficult material:  and Tantallon Community Players, based in Fort Washington, rises to the challenge of Tennessee Williams’ post-war classic A Streetcar Named Desire—one of American theatre’s biggest.  To pull it off, at the very least you need one buff leading man to play the moody WW II veteran Stanley Kowalski (Doug Graupman) and an attractive, sympathetic actress (Kitty Harger) willing to portray his troubled sister-in-law, Blanche Dubois, as a decayed southern belle well past her sell-by date.  Add in a talented supporting cast, and you still have to hope your audience is willing to deal with issues of sexual politics as controversial today as they were when the show first opened over 65 years ago.

this ‘Streetcar’ … revved up and ready for a good ride.

There is also the specter of Elia Kazan’s film version (whose soundtrack gets a nod in this production), starring the now-iconic Marlon Brando and Vivien Leigh.  I mention this because most of us only know “Streetcar” from the movie, which was so heavily bowdlerized by the Hays Code that the key to the whole play—the reason for Blanche DuBois’ despair and descent into madness—was completely erased.  Williams was unique for his time, an openly gay artist writing on openly gay themes; this fact was certainly not lost on Broadway audiences in the 1940s, and it is stunning to realize just how gritty and frank the dialogue is even for our jaded, sex-saturated twenty-first century America. 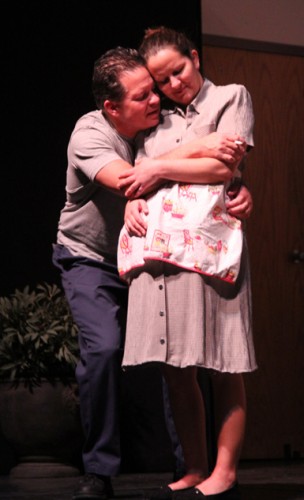 Stanley (Doug Graupman) reassures his wife (Joanna Kenlon) that everything will go back to normal after her sister leaves. Photo by Larry Carbaugh.

The action centers on a cramped New Orleans apartment, occupied by Kowalski and his young bride Stella (played by Joanna Kenlon); the unexpected arrival of Stella’s sister Blanche, with her hyper-dramatic flair and elitist attitude towards her “Polack” brother-in-law, destroys what peace and order there was in the small household.  As Blanche’s stay drags on into months, and as the real reasons for her stay become clear, Williams constructs a brilliant pas-de-deux between Stanley and Blanche, polar opposites with perhaps only one, tragic weakness in common.  Given their differences and the stakes involved, Stanley’s final assault on Blanche is as shocking as it is inevitable.

Conflict is the meat of the play, and here it often turns violent; audiences accustomed to Dame Maggie Smith’s verbal darts on “Downton Abbey” might be shocked to see husbands striking their wives here, both in anger and in lust; even more shocking is the way that Williams’ working-class wives adapt to their husbands’ tempers, stoically bearing the blows and actually deriving strength from riding out the storm.

In Randy Tusing’s sexually honest staging, Stella rises above the stereotype of battered housewife; Joanna Kenlon’s Stella may seem almost melodramatic in her expression of her sexuality but there is no question—in the scene when Stanley famously hollers for her and begs her to come back—that she knows what makes her husband tick.  Kenlon plays Stella’s slow return to Stanley’s embrace as nothing short of a victory lap; she knows she is about to get the red-carpet treatment from her man (and then some). 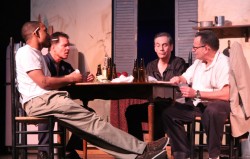 In addition to Kenlon’s sexpot-Stella, Doug Graupman’s performance as Stanley is rock-solid, and he serves as an excellent foil to Kitty Harger’s Blanche, whose immaculate Joan-Crawford looks and carefully crafted hand-gestures mask a host of dark secrets.  Standouts in the supporting cast include Neil Twohig, whose shy, spectacled Mitch grows on you by leaps and bounds as the show progresses.  Vicki Cline is perfect as the Kowalski’s upstairs neighbor Eunice, an earthy woman whose husband Steve (Rich Amada) is determined to give her just as rough a ride as Stanley.  Tantallon veteran Art Greene lends quiet dignity to the close of Streetcar as the Doctor, and Zaneta Walthour makes an auspicious debut here in a number of roles, fanning herself on the steps with Eunice in the opening scene and as the Nurse, at the end of the play, firmly but gently guiding Blanche to her final destination.

The performance I saw had all the tell-tale signs of opening night jitters—odd pauses, muffed lines, and horribly misplayed sound cues—but these are in the nature of things and should be ironed out quickly.  I suggest a little more time in the booth doing cue-to-cue, and this ‘Streetcar’ will be revved up and ready for a good ride.

Running Time: 3 hours with an intermission.