Theatre Review: an adaptation of ‘Hedda Gabler’ presented by the National Theatre of Norway as part of Nordic Cool 2013 at the Kennedy Center 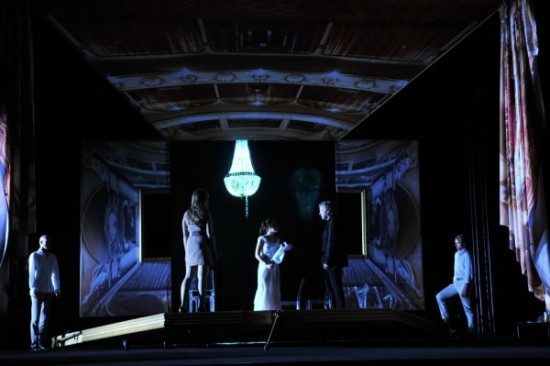 …a compelling piece of theatre.

In the National Theatre of Norway’s modern adaptation of Hedda Gabler  we do not meet the iconic Hedda.  Rather, the woman who graces our presence for 90 minutes is both lovely and vivacious—and disturbed, to be sure by her boring, meaningless life.  More importantly, however, this Hedda, played with an endearing lunacy by Andrea K. Bræin Hovig,  singularly lacks ambition and drive.  Unless, we include the dance and the party and the flirt as high hopes and a life fulfilled. 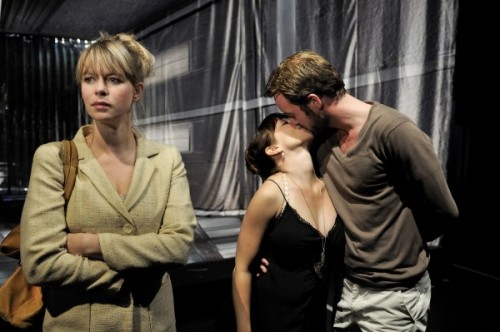 What makes this Hedda Gabler such a compelling piece of theatre is the fact that this Hedda’s convoluted and ultimately tortured soul seems acutely bared before us.  Thus, even though we are continually engaged by this company of five wonderful actors, it is not their acting alone that rivets us.  Rather, our attention is peaked by the manner in which the actors and the action unfolds before us, keeping us focused on the details and curious about the outcome.

From the beginning, director Peer Perez Øian took this adaptation and disarmed his audience.  Sitting in the Eisenhower Theatre before the curtain, I noticed a youngish man take the stage and sit on the piano stool stage right.  I thought: maybe a Kennedy Center official, there to welcome the National Theatre of Norway.  When, a few minutes later, he was joined by another man (tall and bald), and then by a woman in business attire, I turned to my fellow theatergoer and quipped: Maybe that’s the cast, come to chat with us before the show (never once considering the possibility that I might be right).  When moments later a scruffy faced gentleman joined the other three waiting souls, I said: “The bald guy is Judge Brack, the scruffy faced guy is Løvborg, the younger guy Tesman, and the woman…”  I hesitated with uncertainty: that must be Hedda.  When seconds later, a barefoot woman in a lacy black floor length garment ascended to the stage, I quickly added: “No, that’s Hedda and the other woman is Thea.”  What had began as a bit of pre-show extrapolation, suddenly became a fact, when the younger man spoke to us as the actor playing Tesman.  He spoke in English, casually with wit and familiarity.  He introduced his fellow cast members, always including a bit of personal gossip, and then the show, particularly the set, a marvelously abstract classical room with colorful fly-away walls, a raked floor, a manually rotated geometry, and a window/mirror—all designed by Eilev Skinnarmo.  It is a stage meant to act as both pedestal, upon which the characters might stand in exhibition, as well as the space within which their behavior might be revealed and examined.  The lighting design by Magnus Mikaelsen and the costume design also by Skinnarmo, accentuate this difference superbly.

The play then begins to transition between actors casually chatting with an audience to actors assuming the characters in a play that has become one of the hallmarks of modernity.  Tesman, played by Mattis Herman Nyquist with academic charm and solid good sense, aids the transition with a few select Vinyls—yes, collectors’ items which hearkened the audience back in time, to the rebellious 1960s when so many young people threw bourgeois conventionality to the wind and risked living their dreams.  Tesman’s awkward dancing demonstrates his unsuitability to such Dionysian times.  He had better stick with nostalgia.  His Hedda has the moves of a Maenad, however, even if her world view is solidly materialistic.

Tesman and Hedda are soon joined by Thea Elvstad, Assessor Brack, and Ejlert Løvborg.   Tone Beate Mostraum plays Thea, that bookish organizer of visionary thoughts, with strength and complexity, leaving little doubt in anyone’s mind that she loves the passionate Ejlert body and soul.  Christian Greger Strøm plays Brack, that eternal womanizing bachelor, with a political smoothness that would make any Senator envious. Finally, Jørgen Langhelle enters as Ejlert Løvborg.  We met him earlier during the introductions and later during the transition, but now we remember vividly his aggressive dancing when Tesman played the Elvis Vinyl.  We feel the sexual energy, the drive to create and to destroy bubbling in his veins. 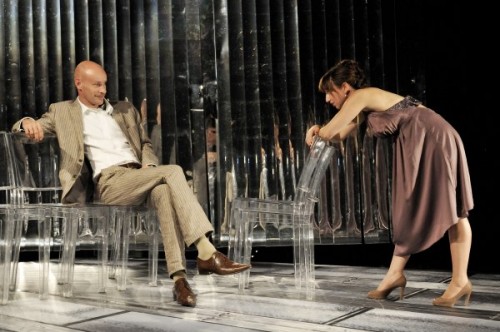 More than anything, Ole Johan Skjelbred’s 90-minute adaptation of Hedda Gabler is a character study about self-fulfillment, or the lack of it.  In one sense, the show examines within a contemporary context the five characters it extracts from Ibsen’s original, but in a more profound sense it offers us the lives of 21st century Westerners who are increasingly focused on the safety and security promised by materialistic concerns.  By stripping away the details of Ibsen’s turn-of-the-century Realism, the adaptation and the production give us five human beings who are enacting a play; that play happens to be a version of Hedda Gabler.  It might have been some other play; indeed, in the end, it was some other play, in the same way that Euripides’Medea is different from Anouilh’s or Müller’s Medea.  The mythic Hedda assumes a different body, and in that different body we witness a 21st century suicide.

Considering the gun-debate that is currently raging across this country, in which suicide by gun takes thousands of lives in the United States each year, this Norwegian import resonates profoundly. To be sure, the gun is not the problem facing Hedda, as her issues with life stream far closer to existential depths; yet, the gun when it lies within arm’s reach, offers the desperate a temporary yet permanent solution to what otherwise might only be a momentary crisis in creativity and inventiveness.

Performed in Norwegian with English subtitles.

Hedda Gabler plays this evening, February 27, at 7:30 the Kennedy Center.  For tickets or for information about other Nordic Cool 2013 performances or events click here.