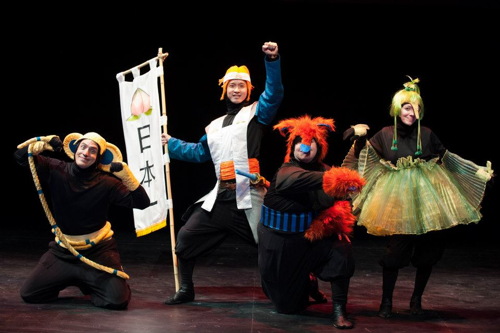 L-R: Rafael Untalan as Saru the Monkey, Jacob Yeh as Momotaro, Phillip Reid as Inu the Dog, Tia and Shearer as Kiji the Bird. Photo by Margot Schulman.

Anime Momotaro merges two Japanese cultural icons: an ancient story of a boy born from a peach and anime.   Anime started in Japan in 1914 and was based on manga stories (tracing back to the 12th Century) that depict animals acting as people. It was after World War II when anime gained in popularity and began to look like it does today. Osamu Tezuka gained international fame with his graphic novel Shintakarajima (New Treasure Island) that featured his signature larger heads and eyes.  Tezuka thought the large head and eyes were necessary to show clearly all the emotions his characters experience in his stories.

From the large teardrops that show up in the most fascinating ways to the sweet anti-bully message, ‘Anime Momotaro’ is a complete experience of joy.

“Momotaro,” a story that dates back to 1600, involves a kindly older couple who yearn daily for a child of their own to help with the heavy laundry and chopping wood.  Then one day a large peach floats down the river toward the old woman.  Pleased at the size and how happy her husband will be with the sizable sweet treat for dinner, she brings it home.  When they cut the peach open, they find a baby boy.  Overjoyed, they named him Momotaro (momo means peach; Taro is a common Japanese boys’ name). He grew to a strong, kind adult and saw the injustices of the ogres that lived on a near by island.  Momotaro sets off to challenge the ogres, and that’s when the exciting adventure begins. 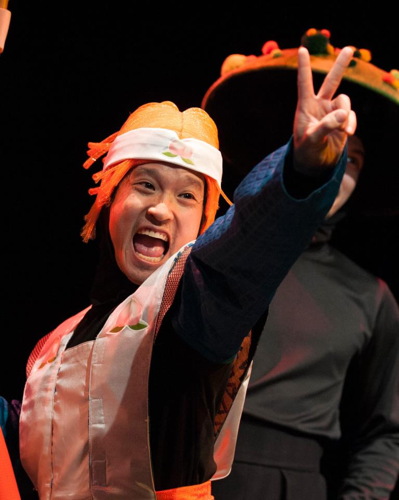 Jacob Yeh as Momotaro (Ryan Sellers as Koken in the background).
Photo by Margot Schulman.

Eric Johnson (Director/Adaptor) envisioned telling this story in the popular style of anime to reach contemporary children with its message of kindness, strength and forgiveness.  He brings anime to the stage by using the characteristic bright color costumes, exaggerated expressions and movements and visual angles and perspectives that can and do change in a split second.

Scenic Designer Natsu Onoda Power designed the set, that worked well for the fast changing locations and characters.  A large peach cut out of the two center sliding panels, that are similar to the panels found in most Asian homes, can also separate to allow for doors, trees and gates.

All five of the actors (Phillip Reid, Ryan Sellers, Tia Shearer, Rafael Untalan and Jacob Yeh) brought the necessary amazing energy to all their characters, and three of them had more than one role throughout the play!  Philip Reid, as the ogre who wasn’t sure he wanted to be an ogre if it meant he would have to be mean and ugly, encouraged the audience to join him in a song that had everyone clapping their hands and singing “Banzai!, Banzai!, Banzai!”

From the large teardrops that show up in the most fascinating ways to the sweet anti-bully message, Anime Momotaro is a complete experience of joy.