Theatre Review: ‘August’ presented by Teatret as part of Nordic Cool 2013 at the Kennedy Center 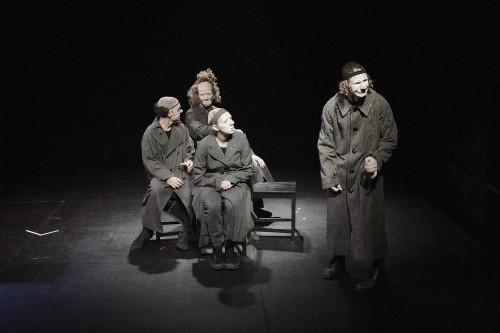 Cast of ‘August.’ Photo courtesy of the Kennedy Center.

If you ever get a chance to experience August by the Danish theatre company Teatret, do not miss the opportunity.  For life’s opportunities are few and far between, and when it comes to rare treats, August and its cast of four remarkable actor-clowns ranks among the rarest.

Such is the show, August.

Directed masterfully by Lars Knutzon, and inspired by Danish cartoonist Storm P (Robert Storm Petersen), Augustbegins with the musical rifts of composer Søren Siegumfeldt.  Soon, a large majestic black box designed by Gitte Baastrup drifts randomly across the stage.  Then four performers emerge from that box: Stine Schröder Jensen, Kristian Holm Joensen, Folmer Kristensen, and Hans Rønne.  Each in turn captivates us with his or her distinct walk, distinct gaze into the auditorium—their interactions with each other impeccably timed and engaged: they cross the stage in strict lines, entering the box before re-emerging once again, either as is or with another in close pursuit.

What follows is not a tale of wonder.  It is not a story of life’s misery.  It is not a fable of people’s quest for the gods.  No, what follows is far more essential, far more primal.  Hans Rønne and Gitte Baastrup founded Teatret in 1984 with a simple, yet profound mission: “To create theatre with existential content, while searching for a spacious common theatrical language.”  With August, they have definitely found that language; and their content, rooted in the physicality of their oh-so-human interactions, resounds existentially. 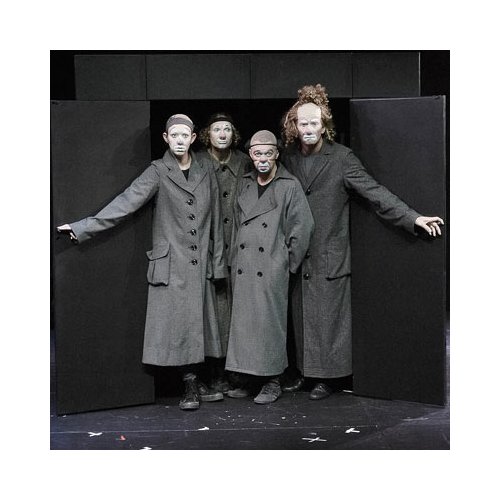 The performers do this through a series of vignettes, both immediately recognizable as everyday yet fablistic in that each “skit” transcends the everyday with Sufi-like simplicity.  Using precise movements, comic exclamations of emotions and/or gibberish, and total engagement in the other actors, the four clowns articulate the full spectrum of what it means to be alive.

There is the tale of the “musical chairs” where the chairs equal the participants.  Kristian Holm Joensen struggles mightily to figure out why such a game is not as satisfying as it might be.  Yet, when he finally succeeds, we learn why the game might not be satisfying even when it is.

There is the tale of the ladder, the man, and the scooter by Folmer Kristensen.  Although you may fear for his safety because he so authentically captures the antics of the uncoordinated, he never fails to amaze.  And success is sometimes less dangerous than we intend.

There is the tale of the three pregnant men (or women).  One of the funniest vignettes of the evening, Kristian Holm Joensen, Folmer Kristensen, and Hans Rønne compare motherhood notes, competing all the while over the beauty of their potential offspring, their possible genetic makeup as well as the shape and size of their “babies.”

Then there is that soulful rendition of “I’m in the Mood for Love” by Stine Schröder Jensen that first appears in the tale of the three musicians.  As each performer does his or her best to form sounds, either pleasant or not so pleasant, we watch with excruciating angst: what might come from the mouths of such singers.  When Ms. Jensen finally unleashes her words—comprehensible and compassionate—we feel so much joy at her success, never mind their pitch or tone.

And that is, after all, the real essence of August.

These four performers on this all but bare stage—with only a few props while under a highlighting light designed by Kisser Rosenquist—enact what it means to be alive.  Take away the excessive verbiage, take away the highfalutin intellects and attitudes, take away the status of power and money, and what one ends up with is the most common of notions: we do our best to make life meaningful, and the more humorously we pursue our life’s goals the better, both for ourselves and for those in the audience who must endure our failures and our successes.

Go see August this Sunday at 2:00—it will make the rest of your day a joy.