Theatre Review: ‘Bird in Magic Rain with Tears’ presented by winter guests as part of Nordic Cool 2013 at the Kennedy Center 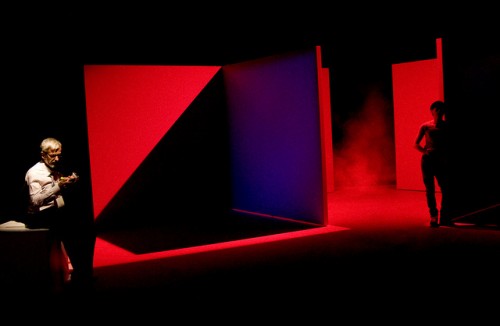 In remarkably nuanced performances, the three characters present themselves, their onstage countenances juxtaposed with enormous close ups of their faces projected on the white walls. We become at once the confessor and the voyeur of these damaged people. Slowly, using a variety of storytelling techniques—from videotaped interviews and YouTube recordings to onscreen instant messages and a screenplay within a play—they reveal the narratives of their lives. 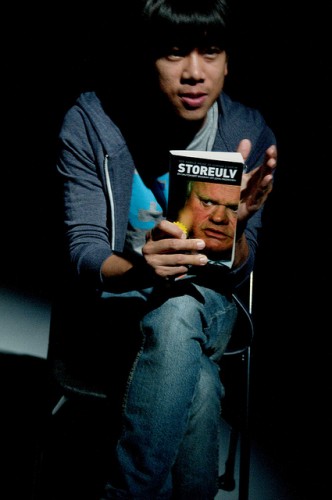 There is Lucas, a young Filipino lad adopted as a child by Norwegians after his birth father was killed in an attack on an oil tanker during the first Gulf War. Lucas’ adoptive father died as well, we learn, his adoptive mother began to drink, and the trajectory of his life went tragically wrong. Lucas has become a “rent-boy,” an HIV positive young prostitute selling his slender Asian body to boy-lusting men he meets through multiple platforms online. Played with manic intensity by Huy Le Vo, Lucas is a quintessential digital native whose real time existence is as raw and sordid as the pedophiles who first exploited him as a twelve year old trading himself for cigarettes. Vo gives Lucas a shattering matter-of-factnessness as he shares the rough reality of his life using the online moniker “bugboy” to traffic in the gritty niche markets of HIV positive men seeking raw sex and “bug chasers” who seek out positive rent boys so they can contract the virus.

There is Sophie, a Norwegian woman in her 40s who lost her beautiful young son, Julian, to cancer—“a black cancer”— several years before. Played with riveting dispassion by Yvonne Øyen, Sophie, in her grief, began to photograph her face, sitting, watching her neighbor come and go. She began photographing his daily life and the daily lives of other people and became renowned as a conceptual artist. But what she does is not art, she tells us. She is only filling time. “What I do is irrelevant artistically,” she says, yet it is often through her—and her on-camera interviews—that we learn the characters’ stories. The understated grief of Øyen’s Sophie rocks us, and the finesse with which she mines the ravaged inner lives of others reverberates as well.

And finally, there is Patrick, a silver-haired British financier who is dying of a tumor. Played with powerful subtlety by Andrew Wale, there is a desperate ferocity to Patrick. He has six months to live, he tells Sophie when they meet on a train. It is the same train Patrick once rode as a young boy with his father, and the memory of watching his father rise, take his briefcase and exit without him haunts Patrick still. “He’d forgotten I was there so I wasn’t,” he tells Sophie. “I’ve been more or less invisible ever since.” Now a wealthy man in a failed and childless marriage, Wale’s Patrick is deep on the downlow, and in the time he has left he has hired Lucas in a desperate quest for tenderness and the definitive “boyfriend experience.”

Over the course of the evening, their stories intersect, their isolation entwines, and we—witness to it all—reach for meaning, for resolution, for some respite from the existential fall. “You have too much time,” the dying Patrick says to the grieving Sophie, “and I have too little.”

Alan Lucien Øyen and Andrew Wale’s play moves between emotional connection and a kind of Brechtian, postmodern alienation, transmitting fragments of narrative in spectacularly inventive ways. Breaking the pretense of realism, the production sweeps forward using distancing techniques that pervade our contemporary electronic culture. Again and again, the characters speak directly to us through the ubiquitous cameras of our digital age. Their faces loom large on the long white walls of the partitions. Instant messages click by. In one magnificent visual, the text of Lucas’ screenplay in progress scrolls across panels spanning the entire stage. 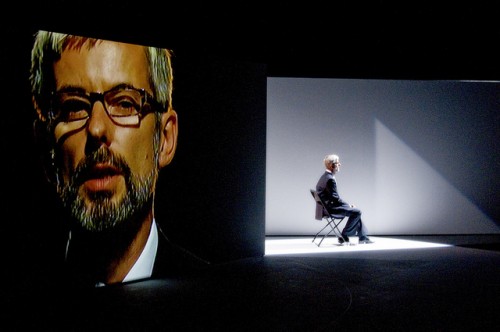 The script was originally inspired by the real life machinations of John Fredriksen, a Norwegian-born shipping mogul who grew impossibly rich transporting oil through the Persian Gulf during the first Gulf War despite the grave danger to the ships’ crews. Patrick hints at a complex business relationship with Fredriksen, detailing the labyrinthine processes he’s perfected for hiding billionaires’ money. Indeed, when Sophie and Patrick meet on the train she is reading a biography of Fredriksen. And later, Lucas, desperate to piece together the circumstances of his birth father’s death, clings to the possibility that his father died on one of Fredriksen’s ships.

There is pounding bleakness to the characters’ lives, yet despite their despair we find respite in the sheer beauty of the production, with its pristine aesthetics and impeccable execution. The three actors, skilled as they are both onstage and on film, bring constant grace to the production. Bird in Magic Rain with Tears is an exquisitely crafted production with chiseled lighting by Torkel Skjæchoreography; seamless, fluid video and set design by Martin Flack and Alan Lucien Øyen; haunting, resonant sound design by Gunnar Innvær and the finely integrated production by Gunn Hernes.

Director Alan Lucien Øyen repeatedly presents us with hypnotic, “making strange” moments—shards of insight that at once stand on their own and come together in a composite of cohering narrative. Images appear, projections flicker, cryptic expressions repeat in semiotic rituals heavy with import, and we scramble to decode them.

Early in the play, for example, Sophie gazes at Jacques-Louis David’s iconic painting, La Mort de Marat/The Death of Marat. Patrick, joining her at the museum, translates the note in the murdered Marat’s hand. “My great unhappiness deserves your kindness,” it says.

Later, Sophie speaks of the paper tracings her dead son Julian loved to make, and we see faint outlines of flowers on the screens behind her. “I don’t feel him anymore,” she says late in the play. “He’s so far away it hurts. He’s a paper tracing. He seems less real now than a 14-year-old boy I have never met.”

Lucas shows us a child’s sketch, and we finally learn that the title of the play—Bird in Magic Rain with Tears—refers to this drawing he made as a small boy for his lost birth father.

And finally, in a dreamscape of death, Patrick, gently guided by Lucas, dances slowly through a magic black rain. Perhaps, after all, great unhappiness does deserve kindness. Perhaps, after all, in kindness Lucas and Sophie and Patrick find their own necessary illusion to mitigate their existential despair.

Birds in Magic Rain with Tears has completed its performances at the Kennedy Center, but the Nordic Cool Festival is just beginning.  For more shows and events click here.