Theatre Review: ‘Dial “M” for Murder’ at the Little Theatre of Alexandria 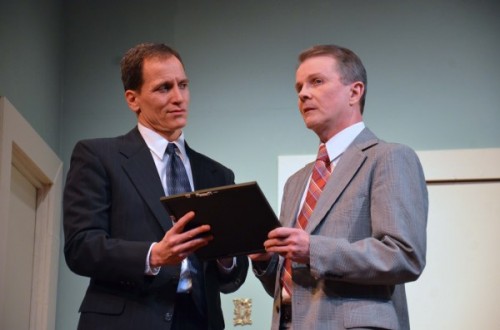 I’ve always enjoyed a good murder mystery.  Growing up, a Nancy Drew novel would accompany me to the library circulation desk most Sunday afternoons.  Eventually, I discovered Agatha Christie, and a taste for Alfred Hitchcock films soon followed.  So I was thrilled to have the opportunity to review The Little Theatre of Alexandria’s (LTA) production of Dial “M” for Murder, a classic Hitchcock film.   As it turns out, Hitchcock’s 1954 film adaptation was based on a play of the same name by British playwright Frederick Knott, which had its theatrical debut in London two years earlier.

LTA delivers another solid production with ‘Dial “M” for Murder.’

Dial “M” for Murder centers around former British tennis star Tony Wendice’s crumbling marriage with his wife Margot, whom he married largely to maintain in retirement the lavish lifestyle he had grown accustomed to as a successful athlete.  Trapped in an unfulfilling relationship, Margot begins a short-lived tryst with Max Halliday, an American crime-fiction writer visiting London.  When Tony learns of the affair, he sends anonymous blackmail notes to his wife, in which he threatens to reveal the affair.  Unsettled by his wife’s infidelity, or perhaps motivated by greed alone, Tony painstakingly plots the perfect murder to do away with his wife and inherit her fortune.  However, when Margot manages to thwart the murder attempt and kill the assailant, Tony plants one of the letters Margot received from Max on the would-be murderer’s body.  This leads the police to arrest Margot on suspicion that she killed her alleged assailant to end the blackmail. 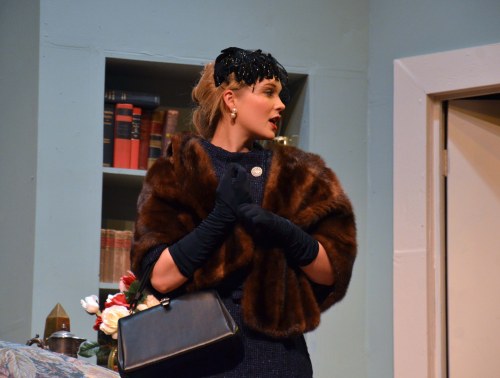 Knott’s well-crafted play will keep audience members unfamiliar with the Hitchcock classic on the edge of their seats through myriad plot twists and clever uses of easily overlooked fact patterns.  The playwright’s skillful use of interwoven storylines to create suspense and capture audience attention is critical to the success of this nearly three-hour production, which transpires entirely within the confines of a London flat.

Equally critical to the success of LTA’s production is a strong performance by Richard Isaacs as Tony Wendice.  Isaac’s wry smile, at times ironically deadpan tone of voice, and subtle turns away from his interlocutors toward the audience at key moments deftly portray the scheming of a husband who freely turns to extortion and blackmail to secure the murder of his wife.  Isaacs may have mastered the art of playing the cunning criminal antagonist during a previous appearance in Agatha Christie’s masterpiece murder mystery The Mousetrap.

On the side of law and justice, John Henderson delivers a stellar performance as Inspector Hubbard of the London Police, whose investigative tenacity guides the plot to its unexpected resolution.  Henderson has great stage presence that suits the role of Inspector Hubbard perfectly and makes him an imposing counterpoint to the calculating and deceptive Tony Wendice. 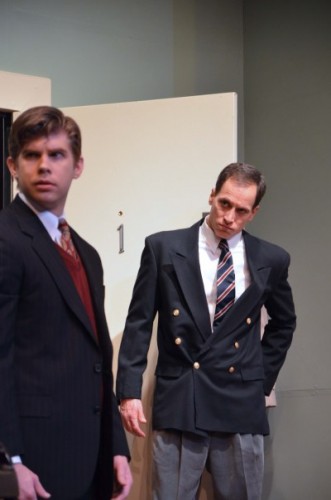 Nevertheless, a few production decisions detract from the overall success of LTA’s production of Dial “M” for Murder.  Foremost among these is the decision to remain faithful to Knott’s original setting of the play in London.  All of the characters, with the exception of visiting American author Max Halliday, are Londoners and, as an unfortunate result, LTA’s actors are saddled with maintaining cloyingly artificial accents throughout the production.  While some manage to pull through admirably, others abandon the task before intermission.  The producers might have considered invoking creative license, setting the production in New York, and casting Halliday as an up-and-coming West Coast author.  The transcontinental culture differences between a well-to-do New York couple and a Southern California writer would have served the same purpose as Knott’s original transatlantic divide, without the need for affected accents.

Likewise, on more than a few occasions, actors and stage crew are required to walk awkwardly across a dimly lit stage during scene transitions or to enter and exit.  These moments could have been easily avoided by having actors exit to one side and walk around behind the scenes, or by lowering the curtain briefly between scenes.

Overall, however, LTA delivers another solid production with Dial “M” for Murder.

Running Time: 2 hours 40 minutes with one 5-minute break and one 15-minute intermission.

You can catch this suspenseful murder mystery at LTA’s charming and intimate venue in Old Town, 600 Wolfe St, Alexandria, VA, Wednesdays through Sundays now until March 16.  For tickets click here.

A native Washingtonian and Georgetown University graduate, Philip Johnson has been involved in theatre since high school. He has been amazed at the growth in DC's theatre scene over the past few years and looks forward to more brilliant productions from the many great professional and community theatres DC has to offer. While appreciating all genres, he particularly enjoys musicals and comedies...and musical comedies? Well that's the best of both worlds.