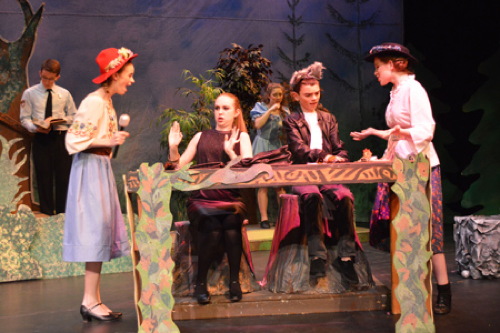 The news headline reads, “The Fairytale Trial of the Century!” and in the Fairytale world, the trial of the infamous Big Bad Wolf certainly is.  Encore Stage & Studio’s comedic production of Big Bad at Thomas Jefferson Community Theatre delights children and adults alike as the Big Bad Wolf must prove his innocence despite all of our favorite childhood fairytale friends testifying against him.  Big Bad is the ultimate in interactive theater: the audience votes to decide the wolf’s guilt or innocence!

The Grimm Sisters (perky Malena Davis and Erin Poplin) guide the audience through the trial as television news reporters.  As the trial beings, the Fairy Godmother (Robin Messner) steps up to represent the fairytale characters ready to put an end to the Big Bad Wolf’s reign of terror.  Messner does a wonderful job delivering her lines and doesn’t miss a beat throughout her entire performance.

This one shouldn’t be missed.

First up to testify is Little Red Riding Hood (an adorable and sassy Caroline Morley). She appears with her grandmother, Grandmother Hood (Grace Iekel, exhibiting a wonderful attitude).  Little Red testifies about how terrifying it was to see the Big Bad Wolf (a handsome 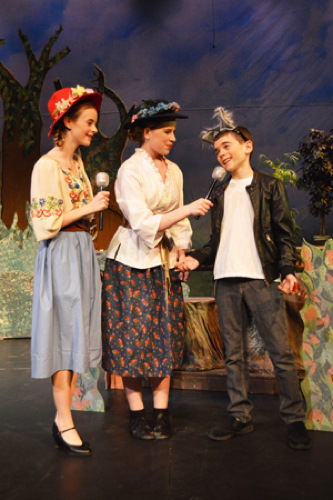 Chris Hahn) in her grandmother’s clothing and in her grandmother’s bed. Worst of all, she describes how chilling it was being eaten by the wolf and find herself in the darkness of his stomach.  Looking no worse for wear, Morley easily portrays Little Red as a girl telling the “horrors” of this story but who really has not been affected at all.  She is only seeking monetary damages to use toward a vacation for her and her grandma.

Enter the Evil Step-Mother (a very talented and focused Meghan Mack) to represent the wolf.  At first, she doesn’t seem interested in the trial at all and says as much. But after a quick, touching moment between her and the wolf, she changes her mind and begins to work the truth out of each character’s claims against the wolf.  That touching moment arises when the Evil Step-Mother rhetorically asks the wolf why she needs to be there in the first place, since everyone knows the Big Bad Wolf is bad. The wolf replies, “Nobody knows what it is like to grow up being hated just for who you are.”

Each fairytale character has their turn on the stand, and each tells their story of how the wolf harmed them, only to have the Evil Step-Mother get each one to admit that they shared some (or occasionally, all) of the responsibility for that harm.  The Three Little Pigs (Camila Cardwell, Arwyn Fleming and Kevin Grieco) were adorable and were perfect as annoying siblings.  Sam Barrett, the Woodcutter, did a great job as the hero to Little Red and her Grandmother, as did Sam Schachter, as the Shepherd, and Erin Loftus, as his son, The Boy Who Cried Wolf.

A very funny Talia Pekari played the Judge presiding over the trial, and Connor Stapp was right on as the impassive Bailiff. Sophia Dristas was also very cute as the Fairy Godmother’s Mouse Clerk. 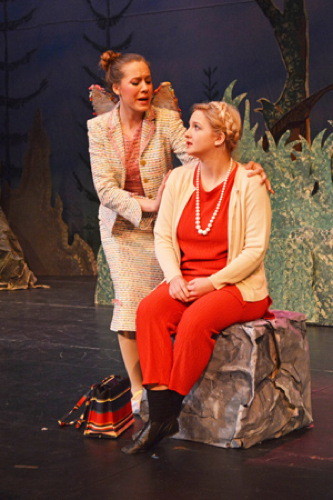 In between the action of the trial, quick and creative commercials popped up.  It was easy to see that each actor (Tyler Gaugler, Ben Hacker, and Dru Nisbett) had fun, and they all did a great job with each funny ad.

Although the audience votes for each ending, there is another twist in the end.  I’m not going to say what it is, but Ana McMenamin, is delightful as Miss Muffit.

My eight-year-old daughter and I had a wonderful time (and thought the wolf was innocent), and we were both very impressed with the acting talent of the entire cast.  This one shouldn’t be missed.