Theatre Review: ‘Fiddler on the Roof’ at Toby’s Dinner Theatre of Columbia 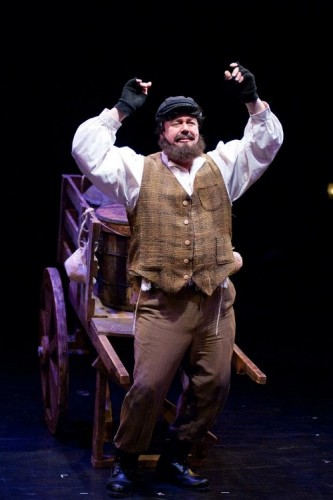 If there ever was a character in theatre who one feels compelled to root for, it has to be Tevye, the nearly impoverished milkman who resides in Anatevka, a small village in Czarist Russia in 1905.  His strong-willed wife has a sharp-tongue, and he is struggling to house, feed and clothe his five daughters.   The three oldest of them eschew deeply ingrained Jewish traditions to which Tevye so desperately tries to cling in favor of pursuing lives of their own fueled by changing social mores.  And on top of that, Tevye and his family as well as the other Jews in Anatevka face constant anti-Semitism and intimidation from Russia’s Czar.

That is the fundamental storyline in the classic musical Fiddler on the Roof, which is now playing at Toby’s, the Dinner Theatre of Columbia.  This production has enough gusto and energy to light that village of Anatevka and perhaps some of Columbia’s villages as well.

Under the direction of David James and Tina Marie DeSimone (who also appears in the cast), the musical performances delivered by a powerhouse ensemble, the acting, staging (in the round), costuming, sound and lighting are at a high level and was a sheer delight to experience.

Fiddler on the Roof, with its iconic score, opened in 1964 and became the longest running show on Broadway (over 3,000 performances) until it was eclipsed by Grease.  It captured 9 Tony Awards of the 10 categories nominated including Best Musical, score, book, direction and choreography.  Based on the Sholem Aleichem story Tevye and his Daughters, the show was crafted from music by Jerry Bock, lyrics by Sheldon Harnick, and book by Joseph Stein.

The central character, Tevye, who appears in virtually every scene in the production, requires a commanding presence and superior acting skills to include appropriate facial expressions, mannerisms and timing.  He needs to possess a rich and authoritative baritone voice and comedic instincts as well.  David Bosley-Reynolds met every one of those challenges and would have made Zero Mostel—the original Tevye—proud of his work.

‘Fiddler on the Roof’ at Toby’s is theatre at its best.

Once Mr. Bosley-Reynolds kicked off the production with a solid rendition of “Tradition,” you knew you were in for a treat the rest of the way.  (Actually, the entertainment got off on the right foot as Robert John Biedermann, who ably plays Mordsha the Innkeeper, offered the customary pre-show introductory remarks in full costume and ad-libbing in ethnic shtick.)

Mr. Bosley-Reynolds continues to soar in “If I Were a Rich Man,” “Sabbath Prayer,” and in one of the more touching numbers, “Do You Love Me?” with Jane C. Boyle as his wife Golde.

Demonstrating his acting dexterity, Mr. Bosley-Reynolds convincingly and endearingly conveys his frustrations with his daughters Tzeitel, Hodel and Chava.  Each one of them pushes back on Jewish traditions, deeply troubling Tevye, to pursue the ones they love.

With Tzeitel it was Tevye’s breaking an agreement—convinced by the protests from Tzeitel (played exceptionally by Tina DeSimone)—with the much older wealthy butcher Lazar Wolf, superbly played by Andrew Horn.  Lazar had been “matched” by Yente (Susan Porter).   But Tzeitel wanted to be with and eventually marry the poor and timid tailor Motel (pronounced MAH-tel) played by David James.

Hodel, charmingly played by Debra Bouonaccorsi, caused Tevye’s blood pressure to rise as she rebuked tradition too.   She was not being formally “matched” and instead found love with Perchick, a radical who thinks little of such customs.  Strong-headed Perchick is played excellently by Shawn Kettering.  Ms. Bouonaccorsi’s rendition of “Far From the Home I Love” is moving, using her beautiful voice to full effect.

For Chava (Katie Heidbreder), it was all Tevye could take.  When analyzing each of the other two daughter’s intentions, he reasoned, “On the one hand…but on the other hand…” before he reached a decision.  In Chava’s case, “I have no other hand,” he concludes.  This is a result of her desire to be with Fyedka (Jeffrey Shankle) who was not Jewish.  Tevye could not go along in this case.

Then there is Golde, Tevye’s wife of 25 years.  She provides comedic balance with her brusque retorts to Tevye especially when the sacred traditions were being compromised. Jane C. Boyle is exceptional in the role.  Golde succumbs to Tevye’s fake nightmare ruse in a spectacular scene that includes white-clad spirits from the otherworld that allowed her to be convinced that Tzeitel should marry Motel. 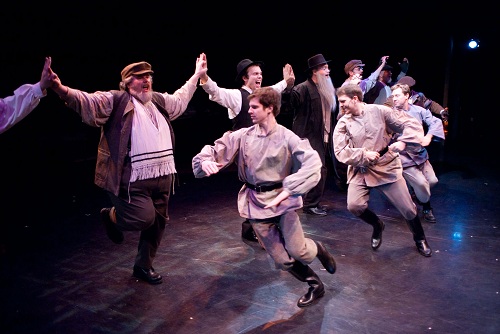 The cast of ‘Fidlder on the Roof.’ Photo by Kirstine Christiansen.

David James draws on his considerable acting resume and success (two-time Helen Hayes award winner) to portray the poor tailor Motel.  Wimpy, especially in front of Tevye, Motel calls up his latent inner strength to fight for the woman he loves.

Toby’s reliable and talented Lawrence B. Munsey effectively plays the Constable, an underling of the anti-Semitic Czar but one who has compassion for the Jewish community in the village.  He ably expresses his conflicting emotions between duty and his concern for Tevye and his cohorts.

Susan Porter played Yente to the hilt leading to amusing exchanges.  And although frequently onstage or above (like on a roof) but not speaking a word, The Fiddler himself was played by Ray Hatch.

At the end, the Czar ousts the Jewish residents from Anatevka and the family members go their separate ways in a sad conclusion.

As fascinating as the story is, the music and staging excel. Other special songs like “Sunrise, Sunset” and “Wedding Dance” add depth to a superb score.  Musical director Douglas Lawler and the orchestra do a fine job in backing up the vocalists, effectively enhancing the singers’ robust performances.

Ms. DeSimone directed the choreography, which was on target with Jewish traditional and Russian Cossack dances.  The entire ensemble executes these with energy and precision and are wonderful in their vocals.

Fiddler on the Roof at Toby’s is theatre at its best.  Mazel Tov to all for taking a classic show and maintaining its luster after nearly five decades.

Running Time: Two hours and thirty minutes with an intermission.