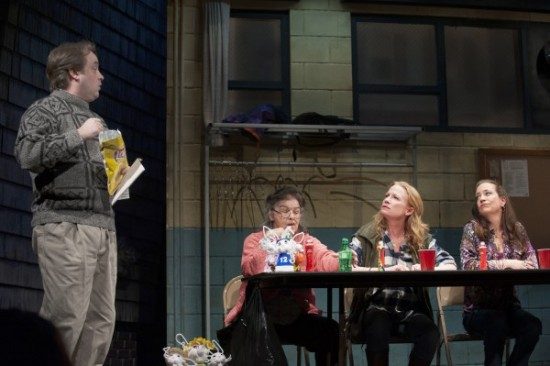 Arena Stage’s Good People has an incredible scenography designed by Todd Rosenthal (sets), Linda Cho (costumes), and  Michael Gilliam (lights).  It also has a strong cast of memorable characters led by the engaging Johanna Day as the gutsy single mom who keeps falling onto hard times.  Additionally, the script has both fabulous humor that will leave you exhausted from laughing, and tension-filled exchanges that will pull you to the edge of your seat.  The production even has uplifting original music with fiddles to help keep your theatrical spirits energized during the scene changes.  It seemingly has everything that a good play should have.

…brings into sharp relief the ongoing debate in this country between the privileged and the disadvantaged, and the roles that opportunity and fate play in our personal narratives.

What David Lindsay-Abaire’s recent Broadway hit does not have, however, is a psychologically credible conclusion; or at least an ending that does not explode the fiction that we have surrendered ourselves to for the last 2 hours and that left me doing double takes all the way home.  Say what?  That’s right!  I might sue for whip-lash. 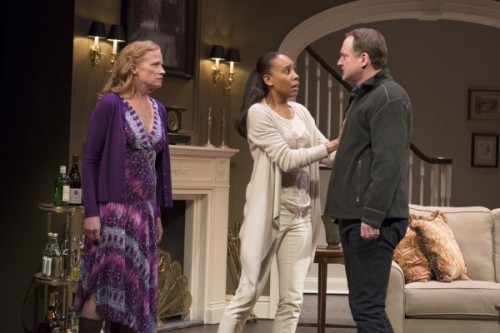 Don’t worry.  I will not give the ending away.  Let’s just say that David Lindsay-Abaire throws in one too many reversals (where the plot does an about face) for this reviewer to accept.  We all know playwrights, like all authors, manipulate an audience’s emotions; but the best playwrights do it without their audience becoming aware of the manipulation. Pulitzer Prize aside, Lindsay-Abaire’s final sleight of hand left me feeling more boondoggled than entertained, more PCed than illuminated.  And for me, it marred what was otherwise a truly wonderful evening of theatre.

Now that I’ve picked that one bone to death, let me tell you the wonderful.

For the most part we all know that professional theatre is becoming increasingly an upper-class centered entertainment.  So, when a play comes along that seriously delves into this country’s ever expanding economic divide, that’s a good thing. Good People does just that: with honesty it plunges us into an Irish working class neighborhood in South Boston.  It gives us characters with psychological integrity who get up every day and struggle to make ends meet, living from paycheck to paycheck.

That’s where Good People begins.  Johanna Day’s Margaret has just gotten fired for excessive tardiness from her Dollar Store cashier’s job by her supervisor Stevie (Michael Glenn).  She has been repeatedly late because her brain-damaged adult-daughter needs a baby-sitter.  The only baby-sitter she can afford, however, is her landlady friend, Dottie (Rosemary Knower), who is always late because she works late.  For anyone who has ever experienced life with children—but without money—Margaret’s experiences are utterly understandable.

When Margaret’s friend, Jean (Amy McWilliams), tells her that her ex-boyfriend of decades ago, Mike (Andrew Long), has come back to Boston as a Doctor, Jean convinces Margaret to give Mike a call.  As Jean says to her, “Maybe he has a job for you.”  Needless to say, Margaret takes Jean’s advice, and suddenly the audience is thrown into the cauldron of real class warfare (not the phony kind babbled about on TV by pundits of all stripes).  That is when the humor, and the tension, spikes to the stratosphere.  Margaret ends up at Mike’s home where she meets his young wife, Kate (Francesca Choy-kee), a woman of color who grew up privileged in our very own Georgetown.  From then on out, everything from the smelly gourmet cheese to the fancy vases to the babies and the bathwater become grist for the class wars.

All the actors do a fantastic job embodying their characters, both their identities and their class identifications.  Johanna Day’s Margaret was a gritty survivor, with a mad streak of passive-agressiveness, as Day combines a gentle “niceness” with a sharp, penetrating wit, particularly as it relates to Margaret’s personal affairs and to the “lace curtain” Irish which Mike, despite his denials, has now become.  McWilliams’ Jean, whose job and marital status the script keeps a mystery, provides Margaret with advice on how to approach life more directly, and was a delight to listen to.  Rounding out the trio of Southie women, Ms. Knower’s Dottie is the hysterical incarnation of the kind of person you would never want to engage verbally.  Not only is she persistent, but she seems genetically incapable of listening. 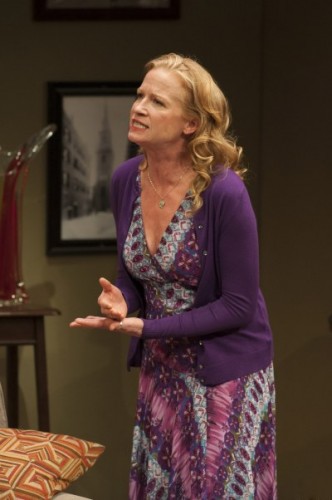 Then there are the two Southie men, Stevie and Mike.  Glenn’s Stevie, a man who seemingly loves Bingo more than women, is the perfectly unassuming, nose as close to the grindstone as humanly possible kind of guy.  Andrew Long, on the other hand, is the Southie “hoodlum” become fertility doctor.  Long did a marvelous job capturing Mike’s discomfort at suddenly finding himself reminded of his former self.  His scenes with Day’s Margaret were filled with nuance and protective banter and jabs, almost as if four people were inhabiting the stage rather than two.

Finally, Choy-kee’s Kate, the daughter of a Georgetown doctor, who seemed so comfortable in her luxurious Chestnut Hill two-story, positively squirmed when Margaret and Mike’s past suddenly explodes.  On the other hand, when it came time to protect her family, her Kate is more than up to the task of marshaling her forces in defense of her husband.

Director Jackie Maxwell does a wonderful job with the actors.  She not only keeps the pace of the action varied, but she also resisted any over-simplification of the characters.  Her work with the design team was also strong, in most part solving the difficulties of multiple scene changes, with only the transition between the final two scenes remaining awkward.

In a world that is increasingly depicted as upwardly mobile, where communities are no longer bound by geography and history, Good People reminds us that many Americans are still rooted in the land—if not the habits—of their mothers and fathers, Good People also brings into sharp relief the ongoing debate in this country between the privileged and the disadvantaged, and the roles that opportunity and fate play in our personal narratives.  As long as the play brings forth in strong dramatic terms the contours of that debate, it succeeds brilliantly, gripping the audience in its questions and responses.

So I say: if only Mr. David Lindsay-Abaire could have resisted more strongly the temptation brought by answers more pat.

Running Time: 2 hours and 10 minutes, with one intermission.