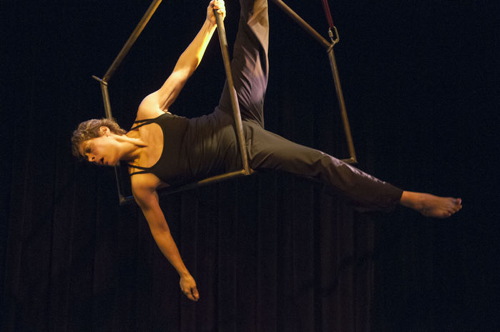 In-Flight Theater’s Naomi’s Flight, currently playing at Baltimore Theatre Project, is something truly unique and significant in the scope of performance. In-Flight Theater’s brand of aerial theater (performed inches above the floor, on steel sculptures suspended from the ceiling) is interesting in and of itself, but what is important about this piece is the theater’s ability to turn what could be mere spectacle into a moving narrative about the nature of memory, the struggles of caregivers, and the descent into dementia.

‘Naomi’s Flight’ is a bold and unstinting look at this disease, expressed in a visually stunning and emotionally powerful way.

Written and performed with incredible dexterity by Mara Neimanis, Naomi’s Flight is the story of Naomi, a boisterous and passionate woman now suffering from Alzheimer’s disease, and the effect this has on her husband (her sole caregiver) and her daughter. The story is told through some impressive acrobatics among Tim Scofield’s impressive steel sculptures, a persistent (and disturbingly funny) dream sequence in which Neimanis envisions killing her mother’s doctor, placid NPR-esque voice over statistics about Alzheimer’s disease, diabetes, the toll of caregivers, and from Neimanis herself, echoing her parents’ voices with empathy and consummate skill.

Particularly moving is her turn as Naomi, featuring a brilliant, almost childishly beatific smile, kicking her legs as she swings back and forth on a steel ring. As Naomi’s present fades, her and her husband’s pasts grow brighter, engulfed in memories of Latvian autumns, a Manhattan courtship, and Marilyn Monroe. 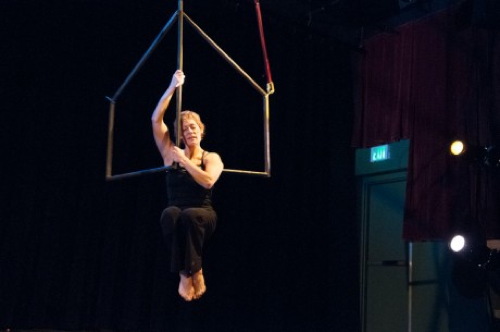 Alzheimer’s disease is currently incurable, and takes a terrible toll on family members, caregivers, and patients. Naomi’s Flight is a bold and unstinting look at this disease, expressed in a visually stunning and emotionally powerful way.