Theatre Review: ‘Kafka on the Shore’ at Spooky Action Theater 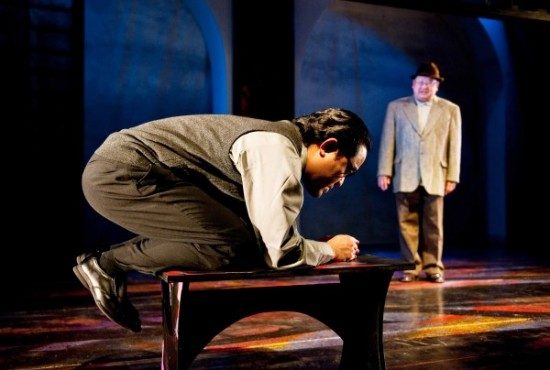 If you are looking for the straightforward tale—or even the fairly crooked tale—then you had better not venture into Spooky Action’s production of Frank Galati’s adaptation of Hauki Murakami’s Kafka on the Shore, which opened this week at its intimate 16th Street theatre. Because the twisted bit of ambiguity described above is but one small piece of the surreal tale you will find there. 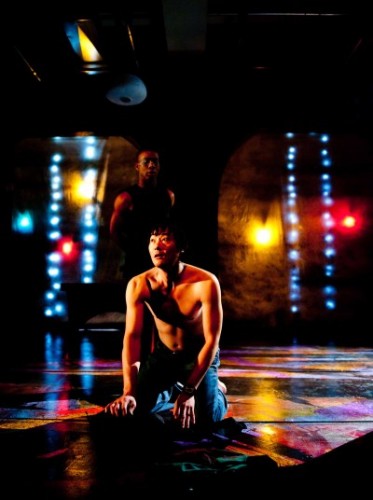 The theatrical Kafka on the Shore is a time bending, universe altering postmodern coming of age story where boy meets man, and man meets woman, and woman meets Hegel, and Hegel meets iconography, and iconography meets archetype meets boy. In the end you will want to sit down with Dr. Jung and have him help untangle the twisted plots you have just gone through.

What I would tell him is that after an utterly delightful first act during which two plot-lines—full of comedy, drama, and magic—synchronistically interact, Galati’s adaptation begins to unravel, splintering into more parallel universes than a string theorist on crack. And the production that began as a crisp, wonderful dream-play of anima and animus archetypes ends as a collection of favorite truisms and talking heads, which might be fine for a Dr. Phil interview about growing up, but does not do as well on stage where seeing is believing.

Michael Wong plays the young Kafka—not his real name but the name this highly advanced 15-year-old chose for himself (he loves the novelist’s opus, particularly his short story “In the Penal Colony”). Wong plays the young psychic adventurer as an introvert, which is appropriate; unfortunately, his characterization goes in and out of focus, and because his Kafka’s narrative arc must embody the journey of the play itself, the audience never witnesses the maturing process he supposedly experiences. To be sure, the script does not allow that journey to surface easily, but surface it must.

A strong ensemble of actors surround our adventurer. Dane Figueroa Edidi does a fabulous job as Kafka’s spiritual Crow. Edidi’s physical and vocal control is always a joy to behold, and his fan-play is exquisite. Equally engaging is the work of Al Twanmo, who plays Nakata, a World War II survivor who was mentally damaged as a boy during the war. His journey, though fragmented, was by far the most moving. Steven Beall also does a good turn as Johnnie Walker and Colonel Sanders, two iconic characters now engaged in prostitution and genocide (I’ll let you figure out who conflates with what).

The production also had several fabulous female characters, who ironically were always more than ready to help and to serve the homeless, motherless, and prone-to-violence Kafka. Jennifer Knight plays Sakura, a spunky hair stylist who befriends the young run away, taking him in for a night. Tuyet Thi Pham performs a moving turn as the transgendered librarian Oshima: her identification with the young Kafka undoubtedly saves his life psychically. Finally, MiRan Powell plays the psychically damaged Miss Saeki, whose tragic love life strangely parallels Kafka’s and haunts him. 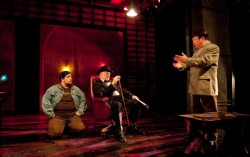 There were also several cats that added significantly to the evening’s first act delight. Steve Lee delivered an adorably friendly cat whose whisker-stroking, leg-rubbing habits evoked images of felines everywhere. Sarah Taurchini, on the other hand, gave us Mimi. I have had only one Siamese in my life but I swear Ms. Taurchini was channeling that cat through her performance last night. What a delight!

Rounding out the cast were Wonsup Chung as the Tall Soldier and Police Officer, Julia Nakamoto whose young school teacher, Setsuko, will leave you distrustful of all cute elementary teachers, and Jon Jon Johnson who makes for an impressive guard dog.

Rebecca Holderness directed Kafka on the Shore, and her pacing of the first act was spot on. The overly wordy, and less theatrical, second act bogged down, however. She assembled an excellent design team, led by set designer Brooke Robbins, whose assembly of Japanese screens created the perfect theatrical space for Kafka’s psychic cauldron of characters and places. Costumes by Sara Jane Palmer aided the audience in identifying characters, and the lighting by Zachary A. Dalton added a simple mystery to the proceedings. Music and sound design by David Crandall punctuated key moments well.

After all is said and done, Kafka on the Shore is a psychic exploration of human interconnectivity that is decidedly more optimistic than its namesake’s vision of the world. Whatever this young adventurer’s real story is, he bears none of the psychic damage that war and riot might bring. Like the tale’s young truck driver who cheerfully doubts the horrors of WWII and the American occupation, Kafka has no personal history haunting him. His absent mother, the woman who disappeared before his memory could photograph her, may inspire his quest but she has left none of the traumas that have damaged his ability to pursue it. Ironically, it is Nakata and Miss Saeki–half shadows that they are–who bear the deepest burdens in this show, and whose quests for reconciliation offer the most satisfying reward.