Theatre Review: ‘Sister Mary Ignatius Explains It All for You’ and ‘The Actor’s Nightmare’ at Bay Theatre Company 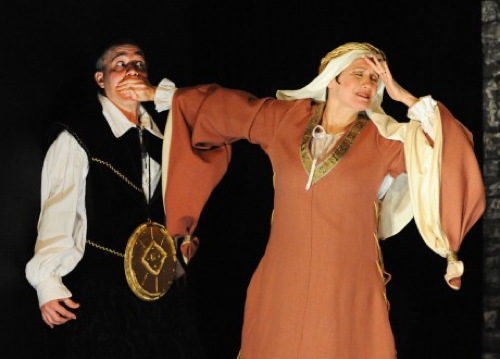 Steven Carpenter is a laugh-riot as George Spelvin in The Actor’s Nightmare — or so the other characters call him — this production is essentially a play within a play within a play. Carpenter delivers his lines with panache and is quite convincing that he is in the play within the play. George does not know who he is or who his characters are, but the absolute worst is – he doesn’t know his lines! Add in Rena Cherry Brown, as Meg the Stage Manager, with her butch demeanor and Bronx accent and it’s a double laugh riot.

Valerie Leonard as Sarah Siddons and Alicia Sweeney as Ellen Terry are stunning in their fancy evening gowns and diamonds portraying their snooty high-society characters whose goal is to make Carpenter’s character the lead idiot. As the act progresses, George can’t remember his lines so the women’s lines become repetitive and are delivered with an increasing level of insanity that boost the level of laughter coming from the audience.

The audience is then introduced to Alicia Sweeney’s cockney trashcan girl from Samuel Beckett’s Endgame. Her puppet-like movements are reminiscent of slap-slick comedy and when she needs to “pause,” Sweeney announces it with distinct humor. Also, if one knows Beckett’s plays, there are quite a few references in this production to his most popular plays.

Paul Edward Hope as Henry Irving, a great actor, is on cue with his Horatio character from Hamlet, but Hope really stands out and is quite manly as the Executioner. And here is where the surprise ending comes in. One reveal is that the last minute is played in the dark and the sound effects are quite real.

Act II of this double feature is Sister Mary Ignatius Explains It All for You.  A forewarning to Catholics, this production does use humor to poke fun at Catholicism but there is in this production nothing that hasn’t been reported or implied in the news. The humorist twist is what makes it enjoyable. 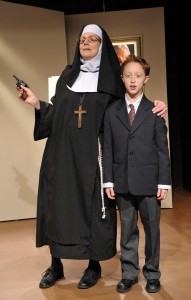 Rena Cherry Brown reigns as Sister Mary and portrays this character as borderline nut case. Which Sister Mary is! “Sister needs to take a nap; come sit on my lap,” she says to Thomas played by Andrew “Drew” Sharpe, who is very sharp and quite representative of the almost all-knowing Catholic schoolboy. It’s as if this part was written for him.

Enter Hope, Carpenter, Leonard, and Sweeney and this ensemble takes it up a few notches. These former students of Sister Mary have come to put on a pageant, an abbreviated version of Jesus’ life; another play within a play by Durang. The pageant extravaganza is hilarious and totally horrible at the same time because the acting in the “play” is really bad but this foursome pulls it off. Additionally, the use of some of the props is distasteful, and if their dreadful production doesn’t put Sister Mary into a tail-spin, their confessions will.

During confessions, Sister Mary finds that each of her previous student’s lives have not turned out as she anticipated. Each has dealt with a life-changing struggle associated to a Commandment – such as “thou shall not kill.” This is where Valerie Leonard shines as Diane Symonds and opens up the abortion debate.

Hope, Carpenter, and Sweeney’s characters have confessions as well and their issues are on the borderline of hot-button topics with the Catholic Church, one cannot help but empathize with their struggles. Their pain certainly ignites the madness in Sister Mary along with a very surprising confrontation with the students and an unexpected twisted ending.

The double feature of Sister Mary Ignatius Explains It All for You and The Actor’s Nightmare runs through March 17, 3013 at Bay Theatre Company, West Garrett Building, 275 West Street, Annapolis, Maryland 21401. To purchase tickets call the box office at 410-268-1333 or click here.