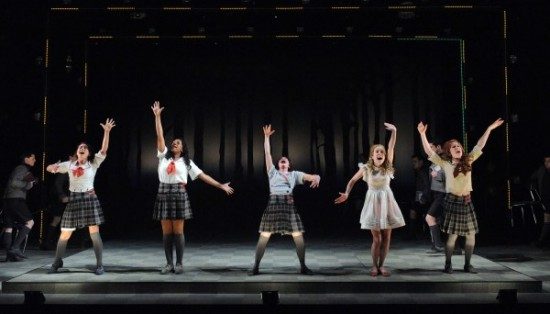 Washington theatre-going audiences are growing older by the season: thus, it is only natural for theatres to select shows that appeal to the gaze of older crowds.  On the other hand, there is Spring Awakening, the older play by groundbreaking German playwright Frank Wedekind, given a new gaze that is most definitely youth-oriented.  This high energy, Tony-Award-winning coming of age musical drama, which opened at Olney Theatre Center this week, will most definitely entertain even the stuffiest of conservative dads, even if it then leaves them fuming about being blamed for many of youth’s myriad confusions and problems.

…the audience could not help but sit mesmerized.

The themes of Spring Awakening are poignant, and do not recommend themselves to the light hearted.  Though some early scenes provoke a good deal of laughter and the music consistently rocks, as soon as the plot plunges into darkness it becomes increasingly difficult to keep chuckling.  Despite the glitter and the glam, Spring Awakening is not Glee; it is a full scale baptism into the dark side of teenage life, complete with incest, sado-masochism, homelessness, suicide, abortion and death, and with little hope on the horizon. 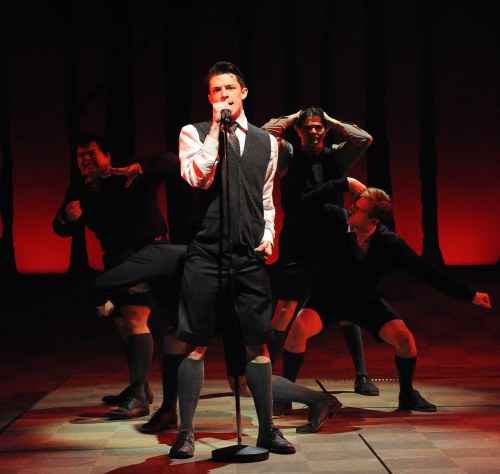 Directed by Steve Cossen, with musical direction by Christopher Youstra, the Olney version of this concept-musical is indeed an electric affair.  Set designer Adrian Jones has cleared the stage, so to speak, of all references to time and place, except for a few institutional multi-colored modern chairs found in public school houses anywhere.  Then, with lighting designer Robert Wierzel, he has created a proscenium frame of colored lights, with a silhouetted forest in the background that is capable of taking on different hues.  This visually exciting design allows each musical number to take place in a de-contextualized time vacuum, where only the characters still exist.  It is as if the play disappears and the characters step into a Las Vegas show number, framed by orange lights with a forested orange backdrop.  The effect embodies the very essence of spectacle.

It is within this three dimensional time-warp that the story takes place.  In this world, the adults are Victorian and teach Latin but not Sex Ed.  The kids, on the other hand, are modern but dress in uniforms; yet, the issues both adults and youth must face are as real as the world the audience must face outside the theatre.

Costume designer Sarah Beers has created an interesting visual representation of this generational clash with costumes that are more conceptual than contextual.  The two adults in the play are dressed in various Victorian clothing.   The youth, on the other hand, are contemporary Catholic school children, with the girls in iconically correct short plaid skirts and white shirts and the boys in paralleling black shorts and white shirts.  Cleverly, the girl’s bloomers remind us once again of the Victorian silence about sex and darkness.

The story of Spring Awakening is simple and secondary to the ideas that frame it. Fifteen-year-old Melchior (Matthew Kacergis) knows about sex; in fact, he writes an explicit 10-page essay on the subject with illustrations.  Melchior’s friends do not know about sex; his sex interest, Wendla (Alyse Alan Louis), still believes storks deliver babies down chimneys, while his best friend Moritz (Parker Drown) thinks wet dreams are a plague of locusts.  The play’s strongest comedy occurs during this conceptual exposition as the adults’ myopia confronts, or denies, the kids’ most basic of hormonal awakenings.  Soon, however, the American Pie style comedy pulls back the covers, exposing a bedroom of familial abuse. 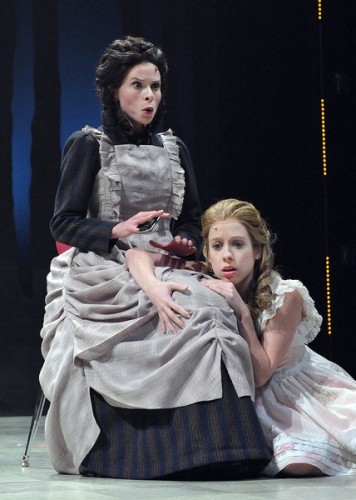 The leads were extremely well matched in this production.  Ms. Louis’s curious Wendla opens the show with the simple lyric “Mama Who Bore Me.”  Her strong beautiful voice gives her lithe body a powerful presence, and she immediately captures our hearts with the vulnerable clarity of her notes.  Meanwhile, Mr. Kacergis’s charismatic Melchoir has a ferocious seriousness of purpose.  His “All That’s Known” establishes the conceptual dimensions of the story, and he articulates the song with a hypnotic intensity.

Mr. Drown’s Moritz ably carries the play’s tragic weight.  His scene with Maggie Donnelly, who played Ilse, was particularly effective.  A victim of sexual abuse, the now homeless Ilse attempts to woo the suicidal Moritz.  Meanwhile, we, the audience, sit silently, all the while begging fortune to spin her wheel to a different result.  Moritz’s “Don’t Do Sadness,” ironically performed with microphone in hand, and again framed by those America’s Got Talent lights—its emotional punch leaves us breathless.

The rest of the cast turns in uniformly strong performances, led by the endearingly arrogant Hänschen, played by Austin VanDyke Colby, the sexually abused Martha played forcefully by MaryLee Adams, the feisty Thea—one of Wendla’s friends—played by Gracie Jones, and Ethan Watermeier and Liz Mamana, whose numerous adult characters remained sympathetic despite their quasi-villainous roles.

The real show stealers, however, were the ensemble pieces and Sam Pinkleton’s energic, yet precisely choreographed dance numbers.  Stylistically cohesive, yet as emotionally varied as the tale they were kinesthetically narrating, each piece captured the intent of its song.  Whether it was the vivaciously up-beat “My Junk” or the soon following “The Dark I Know Well,” in which Martha and Ilse usher in the sexual underbelly of the play, each cast member brought such passion to their movements, and such a high degree of individuality to the stomps and gyrations, glares and gesticulations, that the audience could not help but sit mesmerized.

To be sure, the work of the orchestra plays no small part in that mesmerization.  Conducted by Christopher Youstra, who also played the keyboard and accordion, the orchestra consists of Patricia Wnek on violin, Andrea Vercoe on viola, Catherine Midelson on cello, Kim Spath on guitar, Frank Higgins on bass, and Alex Aucoin on percussion, with Sam Edgerly and Katie McCreary providing additional guitars.

Despite all the show tunes, however, despite all the colored lights and the high tech displays, it is Spring Awakening’s darkness that wins the day.  For sadly, although the musical focuses on Victorian restrictions on sexual knowledge as the cause of teen tragedy, many of the issues that the play addresses continue to plague America today.  Teens attempting suicide have risen to 1 in 12 last year; approximately 1.3 million teens have run away from home and are now homeless; teenage pregnancies, though down in recent years, still number 500,000 a year (though, to be sure, abortions are safer).  In short, knowledge may be power, but it does not guarantee behaviors based on that knowledge, as Wedekind and Sater’s plots both clearly illustrate.  For Melchoir may know where babies come from, but that does not stop him from having unprotected sex with a girl who does not know better and who then suffers dearly the consequences. 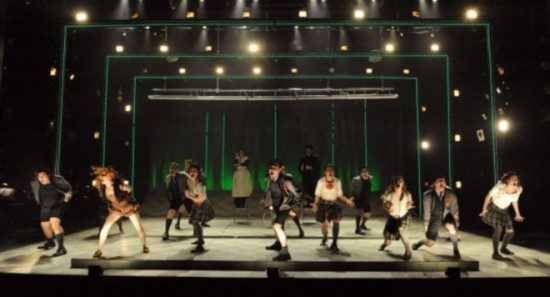 The cast of ‘Spring Awakening.’ Photo by Stan Barouh.