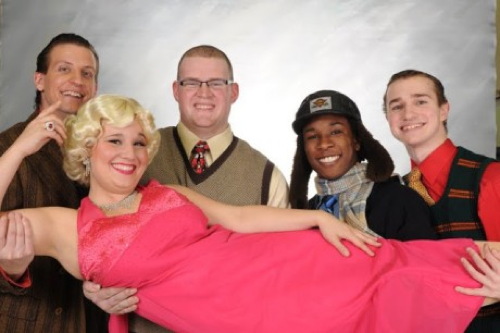 Presented by Dundalk Community Theatre, The 1940’s Radio Hour is a Drama Desk Award-Winning jukebox musical about a live 1942 December holiday radio broadcast.  This broadcast was recorded for the troops overseas and presented by the Mutual Manhattan Variety Cavalcade on the New York radio station WOV. This production is funny, poignant and includes some of the most memorable songs of the era that easily transported the audience back to a simpler time.

As you enter the theater, a radio is playing and the cast is onstage in character preparing for the radio show. In the first act, there is a lot of activity going on simultaneously giving the audience a picture of the characters and their roles at the station. Hats off to director/choreographer James Hunnicutt for this carefully crafted mayhem.

…this was a deeply satisfying production that felt like a labor of love for a bygone era. 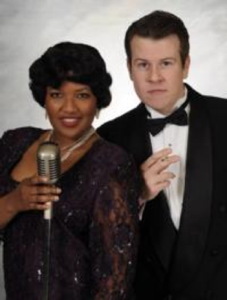 There is a colorful, albeit cliché cast of characters. There is Pops Bailey (Ralph Welsh), the old stage manager who also books horses on the side; Biff Baker (Thomas P. Gardner) a trumpeter in the band who is soon to be sent overseas as a fighter pilot in the Air Force; Wally Fergusson (a charmingly enthusiastic Emil Sueck) the drug store delivery boy with high hopes of getting on the radio; the sometimes gruff and obnoxious stage manager and sound effects man, Lou Cohn (Jake Stuart); the announcer and manager of the station Clifton A. Feddington (Albert J. Boeren) who is comically at his wits end trying to manage the station and his cast including the star vocalist Johnny Cantone (Joey Hellman) a Sinatra wanna-be who spends most of his time chasing the ladies and drinking a bit too much; Ginger Brooks (a very funny Lauren Everd) the flaky but sweet, gum-chewing, blonde bombshell singer; the perky teenager Connie Miller (Amy Greco in a standout performance); and her boyfriend BJ Gibson (the appealing Will Poxon) a fresh-faced college boy who sings in the chorus, longing for his big break in the spotlight; the very funny Neal Tilden (the scene-stealing Henry Reisinger, Jr.) who thinks he has the right stuff to be the next featured ballader; and the classy songstress, Anne Collier (the elegant Molly Doyle) who has her hands full dating Johnny.

The radio performers are rounded out by a powerhouse, African American diva Geneva Lee Brown (Rikki Howie) who is also a nightclub performer. Myrtle Hartman (Cheryl Vourvoulas) and Bess Cuperneski (Kristen Cooley) are the two good-natured ladies who are finalists in a singing contest to see which of them will perform on the broadcast.

The orchestra is also a character in the production – a 10-piece big band that plays on stage known as the Zoot Doubleman (Tim Viets Orchestra).

While the first act literally sets the stage for the broadcast, the second act is the live broadcast of the radio show filled with hit songs of the day that included “Our Love is Here to Stay,” Blue Moon,” Stormy Weather,” Boogie Woogie Bugle Boy,” “I’ll Be Seeing You,” and “Have Yourself a Merry Little Christmas” punctuated with often humorous radio commercials for products such as Pepsi Cola, Chiquita Bananas, and Cashmere Bouquet Soap. A segment of a radio serialization of “A Christmas Carol” was performed, complete with sound effects, and to tie everything together, letters from loved ones were read to soldiers overseas.

The audience was also an active participant as the studio audience for the radio broadcast, clapping when the applause sign is held up and voting for the two ladies in the singing contest. We are also witness to the comic behind-the-scene antics and flubs with Neal Tilden (Henry Reisinger, Jr.) often in the center of many laugh-out loud moments. 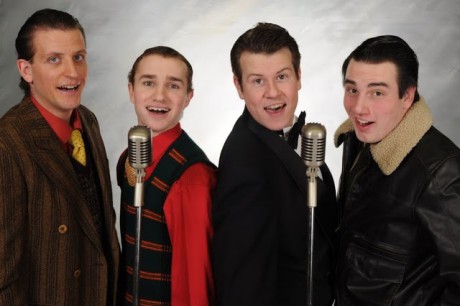 The entire production staff should be applauded for the incredible detail that was presented in this show. It began even before you entered the theater. The lobby had amazing displays of memorabilia from the 1940s and a bulletin board featuring the radio cast (in character) giving them even more of a backstory. Marc W. Smith wore three hats as technical director, lighting designer and scenic designer and did an incredible job.

Perhaps it was first night jitters, but at times the orchestra sounded out of sync, a few of the actors were not as strong vocally and the acting was a little uneven. But as the second act picked up speed so did the performances. In the end, this was a deeply satisfying production that felt like a labor of love for a bygone era.