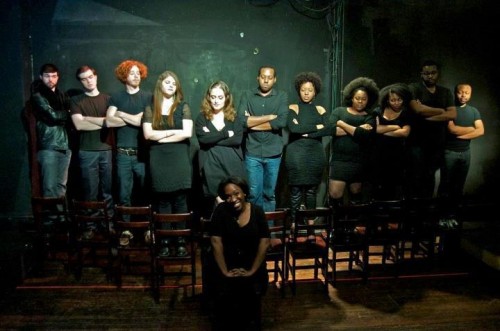 The Bubbly Black Girl Sheds her Chameleon Skin by Kirsten Childs, now playing at Strand Theater, is a musical journey of self-discovery and racial identity. It follows the life of one Viveca “Bubbly” Stanton (Ines Nassara), a young woman whose efforts to appear as inconspicuous and cheerful as possible lead her to question her surroundings, her motives, and her life. From the 1960s through the 1990s, Viveca is forced to confront racism from many sides, romance, failure, and the sleazier side of Broadway show business, even at one memorable point impersonating Looney Tunes’s Foghorn Leghorn during an audition in an attempt to sound more “black.”

The first noticeable thing as one enters the somewhat cozy Strand is the fantastic mural painted on the wall behind the stage. It is a young African-American woman in tears of anguish, clutching the newspaper showing the victims of the 1963 bombing of an Alabama church. Her Afro hairstyle is painted with the word “listen,” repeated in a line of white, while in the background the city fades into cataclysm. Muralist Stefan Ways has created a masterpiece that captures perfectly the conflict of this piece. Beside this mural is a poster framed in stage lights, advertising the Oreo cookie. The slang term “oreo” (i.e., dark on the outside, white on the inside) is a phrase frequently thrown at Bubbly throughout the show.

‘The Bubbly Black Girl Sheds Her Chameleon Skin’ is a warm, funny, thought-provoking piece of theatre well executed by the Strand and the Stillpointe Theatre Initiative.

The performers, who were clearly enjoying themselves, judging by the conveyed enthusiasm and energy, for the most part, adequately handle the difficulty of conducting a musical in such a close space. Dance numbers were well choreographed, and one song, featuring a young Viveca in her dance class, is brilliantly orchestrated, vocally and physically.
That being said, there are some slight drawbacks to the musical form in such a space—some of the softer-voiced or higher-range actors, like S. Ann Johnson (who has a beautiful voice), were difficult to hear over the sound of the accompaniment. No one was no one was wearing a mic, but the keyboards seemed unnaturally loud.

With such a large ensemble cast (twelve actors in all) the potential for dissonance is massive, but the show ran very smoothly. Particular standouts include Nina Kauffman as a “Chitty Chatty” doll, warning Bubbly to “watch out for the bomb now;” Jon Kevin Lazarus as Bubbly’s outrageous hippy boyfriend (named Cosmic Rainbow); Montel Butler as Keith, Bubbly’s camp dance partner; NiZel J. Austin as Bubbly’s boy next door, and, of course, Ines Nassara as Bubbly herself. Nassara’s performance as Viveca is incredibly poignant, a young girl’s hope, enthusiasm, and childlike innocence at odds with the cruelty and violence that accompanied the civil rights movement.

The Bubbly Black Girl Sheds Her Chameleon Skin is a warm, funny, thought-provoking piece of theatre well executed by the Strand and the Stillpointe Theatre Initiative. Despite some hiccups in terms of production, and a slightly abrupt ending (narratively speaking), it is definitely worth seeing, and very entertaining.

Running Time:  one hour and fifty minutes with one 10-minute intermission.