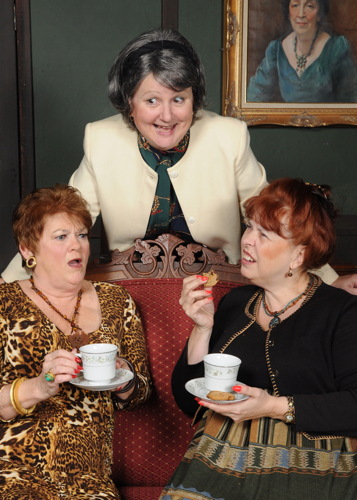 The Cemetery Club by Ivan Menchell, now playing at Vagabond Theatre, is rather maudlin in subject but surprisingly funny. The story follows three Queens, NY widows who meet each month at the graves of their deceased husbands. Each one has a different outlook—Doris (Janise Whelan) spends her time cleaning the area around her husband’s tombstone, dedicating the rest of her life to joining him; Lucille (Carol Conley Evans) focuses on spending her husband’s money on furs and matching accessories; and Ida (Joan Crooks) wonders if she should start dating again, at which point she will no longer be able to visit the cemetery.

The Forest Hills cemetery itself is beautifully done by set designer Maurice “Moe” Conn and set constructor Jay Demarco, featuring a stunning cemetery backdrop by director Roy Hammond and Sherrionne Brown. Even before the show starts, the stage lit as if at twilight, the backdrop is particularly arresting—an impressionistic mural of a graveyard in autumn, the New York skyline hovering in the distance. The front of the stage is strewn with ivy and dying leaves (a point of contention for Doris later in the play). Ida’s living room, where the rest of the show takes place, is also great—right down to the doilies on the Edwardian furniture and the damask-covered chairs.

This play was technically brilliant, and very well performed…

As far as acting goes, some of the New York accents were fairly inaccurate, but there was good comedic timing. Whelan especially was constantly engaged and perpetually enthusiastic, whether munching on cookies or vigorously Windexing a gravestone. Evans’s flamboyant luxury, prancing around in a fur coat, was likewise funny, and the choreographed drunken dancing of all three women at 2 am after a wedding was surprisingly well timed. 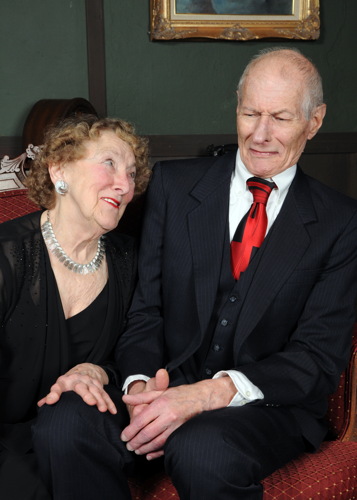 There were little details that made the play worthwhile. Placing rocks on the tombstones, for instance, is a Jewish tradition the characters participate in, rocks being more permanent than flowers and representing a symbolic reburial of the deceased. Each woman got her own separate spotlight at the cemetery, where the ambient noise made it sound exactly like Queens—cars and airplanes. As bridesmaids to a friend’s umpteenth wedding, they wore matching gowns.

This play was technically brilliant, and very well performed (despite the aforementioned issue with accents, which could easily be done away with). I will say however, that the subject matter is somewhat morbid, and the ending pretty abrupt and a little too convenient for my tastes.

The Cemetery Club is playing through March 24, 201 at the Vagabond Players,  806 S Broadway, Baltimore MD 21231. Tickets can be purchased online.