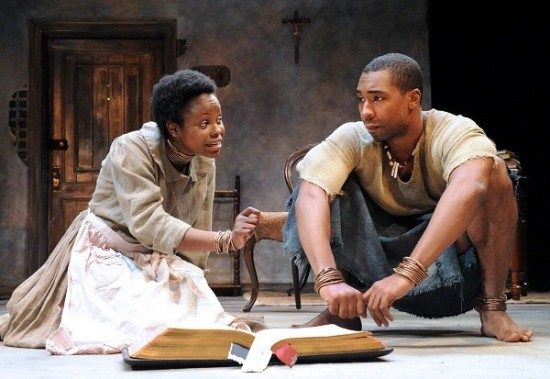 Danai Gurira’s The Convert, now on stage at Woolly Mammoth Theatre Company, is part history lesson on the personal effects of colonialism in the founding of Rhodesia (Zimbabwe) over one hundred years ago, part feminist rebellion against traditional patriarchy and male violence against women, part discussion on the correct response to cultural genocide, part extreme religious conversion and the hard human choices that must then necessarily follow. Mostly, however, this three-act play about a young woman’s cultural awakening is a full-time tour de force drama on the roots of vengeance and terrorism. In a city obsessed with both, The Convert is a production all Washingtonians should see, if not for its excellent drama, then for its deeply ethical exploration on the intersections between culture, identity, family, and god.

For the third installment in Woolly Mammoth’s season My Roots / My Revolution (which previously featured The Elaborate Entrance of Chad Deity and You For Me For You) The Convert takes us into the cultural clashes at the heart of African colonialism. Rather than focus primarily on the racial component of that clash, however, Ms. Gurira turns our attention to its religious dimension. European Christian missionaries have entered village culture determined to destroy the Shona or Ndebele religion and its ancestor-based understanding of the universe. Those scenes of white invasion are not portrayed, however. Instead, we have the world as experienced by a young African Christian, Chilford (Irungu Mutu). His total dedication to the Catholic faith has earned him a leading role in the white missionaries’ efforts at conversion.

…a production all Washingtonians should see

The play opens with Tamba (JaBen Early) helping his cousin Jekesai (Nancy Moricette) flee a marriage arranged by her uncle (Erik Kilpatrick). After taking refuge in Chilford’s house, Tamba’s mother and Chilford’s housekeeper, Mai Tamba (Starla Benford), tries to convince the young Christian to give niece Jekesai a job. At first reluctant, he is not convinced until Mai Tamba tells him falsely that Jekesai wants to learn about Jesus. Ever the evangelist, Chilford immediately opens his home and his school to the young woman. When her uncle arrives and demands that his charge be returned to him in accordance with colonial rule, Chilford refuses, declaring the polygamous religion of the African people a mark of their savagery. That decision and its underlying contempt initiate the drama, establishing both the play’s larger political discussion as well as its personal focus on identity and culture. 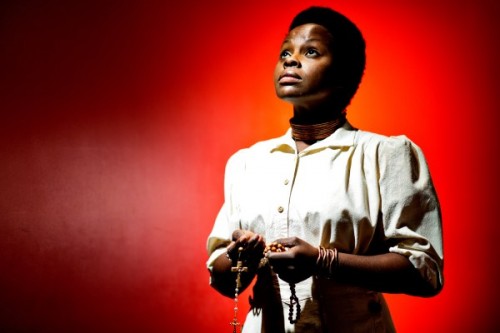 Nancy Moricette does a fabulous job portraying the young village girl searching for freedom in a land ravaged by conquest. She takes us step by step from frightened runaway to young convert to religious zealot to young woman without a people. We not only understand her devotion to this new religion but experience the tension she endures as her family begs her not to abandon her ancestors.

The other two women in the cast also perform wonderfully. Forced by circumstances to don the demeanor of a Christian, Ms. Benford’s Mai Tamba negotiates her master’s religious ideology by wearing, however feebly, the face of a convert all the while practicing the traditional spirit worship in which she was raised. Her double consciousness is both nuanced and fascinating to behold. On the other hand, Dawn Ursula plays the liberated feminist Prudence with authentic force. Taking her cue from Susan B. Anthony’s pipe smoking ways, her Prudence might suffer fools but she will not do so lightly. Of all of Ms. Gurira’s magnificent female characters, hers is definitely the most finely crafted of gems.

Irungu Mutu delivers a believable performance as the Christian evangelist Chilford. The joy he experiences with his new protégée is endearing and keeps his character likeable. During scenes of intense crisis, however, Mr. Mutu has some difficulty maintaining his focus: as a result, his intentions disappear and his emotions tend to screech.

Mr. Early and Mr. Kilpatrick turn in strong performances as the two village men fighting to maintain their families and traditions. Though not as solidly drawn as the women characters, these two men portray the tension between a desire for liberation and their need to survive a brutal colonialism. The scene in which Tamba accuses Jakesai of betrayal was particularly effective, and Kilpatrick sincerely captured the uncle’s defense of his cultural roots. 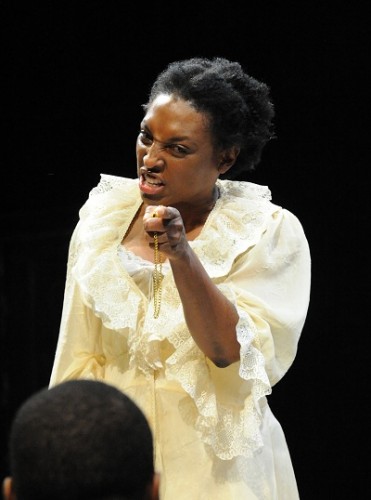 Finally, we have Prudence’s betrothed, the flamboyant womanizer Chancellor, played by Alvin Keith. Mr. Keith not only embodies the confident Chancellor to the letter but, when later in the play his fortune turns dangerous, he pulls off the groveler and yes-man with equal conviction.

Director Michael John Garcés has handled the ensemble with a delicate hand and illuminated the tale at almost every turn. The one weakness in the story and in his direction lies at the play’s thunderous center, however. While set designer Misha Kachman has done a fine job creating the one set interior, the rage that is brewing outside that interior never fully erupts in a Nat Turner style upheaval. After the pounding on the door, which signals the approaching storm, we do not experience the lightning that most assuredly should follow. Instead of a rage that might lead to slaughter, we witness a more rational mockery and subdued aggression. That want aside, the production still rivets our attention, as the ethical dilemmas highlighted by the action are as contemporary as they are a century old.

Costume designer Helen Huang successfully transports us back in time and an ocean away with her period attire, and lighting designer Colin K. Bills uses specials to capture the ominous religiosity of the play’s realistic world. Joe Isenberg has handled the difficult fight scenes with integrity, and sound designer Ryan Rumery’s final birdsong was most effective.

The issues addressed by The Convert are still very much with us today in our post-colonial world. Though little discussed by our talking head media, the rage of the oppressed still burns in the world’s streets every day. As well, the struggles of women to free themselves from violence expressed itself only recently with the One Billion Rising event this past February 14th. Evangelism, by itself and as it operates in combination with invasion and occupation, still raises questions throughout the developing world. The Convert might not offer an uplifting answer to those most disturbing questions, but it does present an authentic response. That response should provide each of us with grist for our own mills, if we are inclined to search for answers to life’s most troubling ethical situations.