Theatre Review: ‘The House of the Spirits’ at Gala Hispanic Theatre 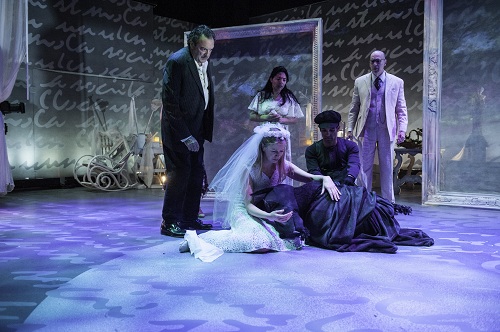 Memory as presence. Narrative as place. Pain as protagonist. In Gala Theatre’s visually chimerac production of the play based on Isabelle Allende’s La Casa de los Espiritus/The House of the Spirits, we enter the consciousness of memory. Grey images flicker across seven translucent screens. A staircase beckons. A mantelpiece awaits. A garden with pink flowers appears. An earthquake shudders all visages. Text scrawls across the stage in indecipherable script. The theatrical space becomes fluid, a transparent liquid through which the epic tale will pass. This medium, we realize, is such stuff as dreams are made on.

Played to roaring applause, Gala’s ‘House of the Spirits’ reminds us that history is a collective experience.

Gracefully directed by José Zayas with stunning projections design by Alex Koch, Gala’s The House of the Spirits is a production built on this surface tension. Memories float on a glassy membrane. We, like water striders, walk on the surface of Allende’s pond. And, we learn from Gala’s ethereal production, it is this membrane of memory that allows human beings to resist external forces. Indeed, Allende’s narrative, like surface tension itself, is a force of nature. It enables us to walk on water. It is the membrane of the human condition.

Playwright Caridad Svich wisely focuses her deft script on the haunting novel’s thunderous patriarch, Esteban Trueba, and the women of the Trueba legacy. She starts with Trueba’s first love, the green-haired beauty Rosa del Valles who dies from poison meant for her political father. She leads us to Rosa’s young sister Clara who prophesizes her sister’s death and, in horror at it’s passing, stops speaking until, as a grown woman, she weds Rosa’s betrothed, Esteban Trueba who has grown rich in dominion over his hacienda—Tres Marias. There is Férula, Trueba’s unwed aging sister who adores the serene Clara with forbidden longing. There is Blanca, Clara and Trueba’s daughter, who falls in love with the foreman Pedro Segundo’s son, Pedro III, and bears their beautiful love child, Alba, to whom Trueba the patriarch becomes devoted and on whom he, as a frail old man, grows utterly dependent.

It is the visage of Alba, her young heart torn by the contradictions of justice and familial love, who guides us through the apparitions of this epic tale. Played with terrifying stillness by Natalia Miranda-Guzman, she embodies Alba’s eloquence, moving Kabuki like through the pain that now defines her; for Alba’s brutalized body must bear the burdens of revenge for her grandfather’s sins, the “epic fornications” referenced so famously by Tennessee Williams’ iconic Blanche Dubois.

As Miranda-Guzman’s Alba is our touchstone, our moral compass–a riveting chronicler of past and present, a once dreamer of what could be–so Nelson Landrieu’s Trueba ages before our eyes. He moves from cocksure patron who, like generations of landowners before him, ruled his plantation with an iron fist, raping young camposinas with impunity, to–in one of the production’s most moving scenes–a feeble old man, wailing for his abducted, tortured Alba. 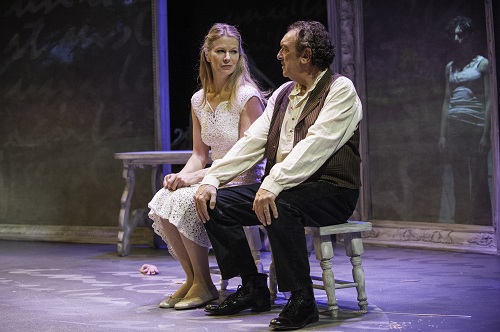 Monica Steuer’s Clara moves with grace through the passages of Clara’s life, from a prophesizing young girl to coquettish ingenue to gentle matriarch and calming spirit. Nancy Flores embodies both the green-haired beauty Rosa and her free spirited granddaughter Blanca with a sensual feminine mystique. Marian Licha plays Férula, Trueba’s unmarried sister, with palpable, muted longing for her sister-in-law Clara. She endures the soul-crushing rigidity of the era and her brother’s raging jealousy with stoic anguish. Licha also plays other characters, including a particularly entertaining appearance as the French Count, Jean de Satigny. While we knew the actor to be a woman, Licha’s command of her lower vocal register was remarkably convincing. Belén Oyola-Rebaz conveys the horrifying helplessness of the camposina Pancha Garcia to resist her violation by Esteban Trueba. As the resilient, resourceful prostitute Tránsito, Anabel Marcano delights, spinning one of the evening’s most humorous moments with her harangue about the need to unionize sex workers, and we root for her as a survivor. Antonio Vargas brings a magnetic, controlled stage charm as the puppeteer of Clara’s beloved childhood dog, cryptically named Barnabas (who was an early disciple of Christ’s). And later, as Pedro III, the protest-singing lover of Trueba and Clara’s daughter, Blanca, Vargas brings a compelling flesh and blood reality to the play’s political landscape. Carlos Castillo plays the torturer, Esteban Garcia, with malevolent intensity, the rotten fruit of injustice ignored. Indeed, the scene between Pedro III, Blanca’s lover, and Garcia, Trueba’s spurned bastard, crackles with the divergent fervencies of youth.

The protean ensemble, rounded out by Marycarmen Wila and Manolo Santalla, moves seamlessly through the production, forming crisp stage pictures on a proscenium of set pieces covered in chalky white like volcanic ash and ghostly books stacked like discarded treasures.

Played to roaring applause, Gala’s House of the Spirits reminds us that history is a collective experience. That past is prologue, future is prophecy, and we who inhabit the present must struggle to heal them both.

Time: Approximately 2 hours plus a 15-minute intermission. The production is performed in Spanish with English Subtitles.