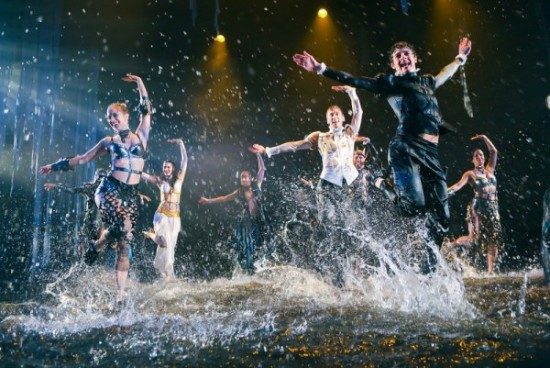 The cast of ‘The Tempest.’ Photo by Johnny Shryock

Shakespeare purists, and perhaps audiences in general, might balk at the idea of a silent Tempest—a seemingly oxymoronic approach to such a lyrical and poetic text.

Synetic Theater will draw you in and prove you wrong.

Their current production, the latest in an acclaimed series of wordless Shakespeare adaptations, does more than justice to the play, painting the plot with movement, clarity, and precision.  The show is a masterful collaboration between Director Paata Tsikurishvili, Choreographer Irina Tsikurishvili, and Fight Choreographer Ben Cunis.  Their wildly ambitious vision for the play impresses at every turn—at once funny and frightening, wild and controlled.

…one of the best Shakespeare adaptations I’ve had the pleasure to see.

What’s more, they do it all on a stage flooded with water, opening a world of great challenges and potential, while offering up the themes of fluidity, isolation, and reflectivity. 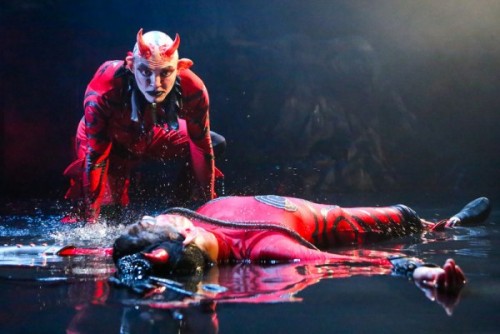 Vato Tsikurishvili as Caliban and Victoria Bertocci as Sycorax. Photo by Johnny Shryock.

The expert and highly physical ensemble works to tell the story of Prospero (Philip Fletcher), the exiled Duke of Milan, and his daughter Miranda (played wonderfully by Irina Kavsadze), both stranded on a strange and magical isle. The “locals,” namely a quasi-human Caliban (Vato Tsikurishvili) and robot-like Ariel (Dan Istrate), lead the show with amazing physicality and grace. They are well complemented by the utterly hilarious Stephano (Irakli Kavsadze) and Trinculo (Emily Whitworth), and the play benefits from some clever gender swaps.

Surprisingly, some of the show’s most fascinating moments would not usually occur onstage; the staging of exposition—in particular, Prospero’s deposition and Caliban’s failed, violent courtship of Miranda—gives an entirely fresh perspective on the circumstances of the play.  The end, too, gestures beautifully towards another story, born out of Caliban’s isolation, education, and rage. Those less familiar with the play will be relieved to find a blow-by-blow synopsis in the program. 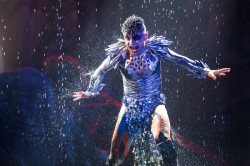 For the most part, the design forms a stunning support system for the actors; the varied, yet cohesive underscore (Irakli Kavsadze and Konstantine Lortkipanidze) and darkly evocative lighting (Andrew Griffin) create the perfect atmosphere for the story. The latter is supplemented by practical, hand held lights (no small feat on a watery stage). The costumes (Anastasia Simes) are detailed and well-suited to their respective characters (perhaps with the exception of Caliban and his mother, Sycorax (Victoria Bertocci), who stand out to the point of science fiction). The pervasive video projections (Riki Kim), while beautiful, are at times overwhelming, and the design succeeds most in its moments of spareness.

Despite a late start due to technical difficulties (during which the audience enjoyed wine on the house), this highly technical production seemed to go off without a hitch. Tsikurishvili has crafted an amazing narrative of human bodies—and one of the best Shakespeare adaptations I’ve had the pleasure to see.