Theatre Review: ‘The Tropic of X’ at Single Carrot Theatre 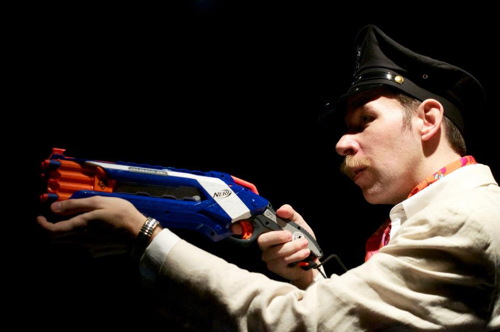 Caridad Svich’s The Tropic of X, now playing at Single Carrot Theatre, is a stylized saga set in a hypothetical future where thrills are cheap and true love comes at a high cost. A strong ensemble of actors ground the fantastical elements in reality, and the director adds structured dimension to the chaotic text.

The story takes place in the not-so-distant-future. I give points to Svich for bypassing the more common choice of a post-apocalyptic world and creating a world in the process of or on the verge of collapse. Svich’s imaginary polyglot America draws connections to the regime changes and revolutions in Latin America’s history. Although it is never entirely clear where the play takes place, the urban, claustrophobic, trash-heap atmosphere conjures up an appropriate setting for the story. The action centers around two squatters named Maura (Genevieve de Mahy), and Mori (Nathan Fulton). An occasional visitor to their hovel is Kiki (Jessica Garrett), a transgender prostitute slash drug dealer. Fabian (Paul Diem), a sinister tourist (among other things) provides the opposition to Maura and Mori’s way of life.  A deejay named Hilton (Aldo Pantoja) functions as a narrator, mirroring the characters’ emotional states in the spinning of his records.

…’The Tropic of X’ tells a memorable story about love in the face of overwhelming odds.

The central conflict of story picks up at the half-hour mark, when Fabian arrests Mori for sleeping in an abandoned arcade. The rules have suddenly changed, possibly from a new ruler coming to power. The play does not reveal any specifics about the government, since the characters have little interest or access to the news. After Mori’s disappearance, Maura leaves the city to find him. She discovers that Mori has been brainwashed, assigned a new gender, blinded, and subjected to countless humiliations by some faceless authority. The challenge then becomes how she can save Mori, if she can save him at all. 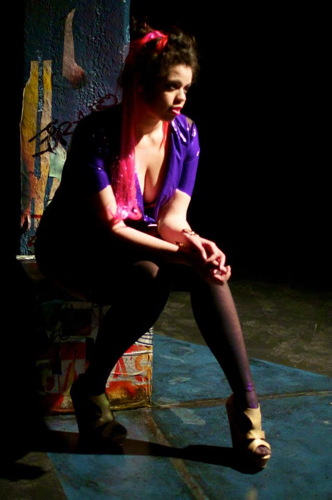 Director Nathan Cooper makes sense of the chaotic storyline and its multiple tangents. While the playwright provides little context for the story, the production has a sense of immediacy and after a while you stop worrying about deciphering the details. It is infinitely more interesting to watch the characters deal with the horrific circumstances that have become commonplace in their society. Cooper counters the play’s inherent need to portray scenes of violence as a means to manipulate the audience, and suggests impending danger rather than giving all the gory details for shock value. A brilliant moment occurs when Fabian (dressed as a nonspecific authority figure) arrests Mori. Mori is playing it cool as Fabian interrogates him, and then Fabian pulls out a Nerf gun and points it at him. Laughter is the first reaction, but Fabian soon flashes a real gun strapped to his waist. As Fabian shoots Mori with Nerf bullets, the sense of danger grows— what will happen when Fabian runs out of fake bullets?

The characters are, for the most part, ordinary people, remarkable only because of the trouble that befalls them. Their speech does not distinguish them as individuals, and they seem a bit generic and unimaginative despite the fact that they speak entirely in imagistic language. This is through no fault of the actors, who bring intention and honesty to their every word. They rip through the poetic text, turning a slew of pop culture references and slang into meaningful conversation. Genevieve de Mahy, who plays Maura, brings a sense of sophistication to the character. It is fascinating to watch her go from spewing curses to sitting back and regarding her surroundings with aloof disdain, as if she is the queen of the world. When Maura’s aristocratic lineage is revealed, the character gains an unexpected but justified dimension. Nathan Fulton plays Mori with a combination of adolescent angst and a childlike willingness to please. The scenes between Maura and Mori, particularly in the latter part of the play, ring with sincerity.

Svich’s script does the actors a disservice by going past theatrically poetic and veering into the realm of needlessly pretentious. The characters speak in a heightened language that is a slew of beat poetry, smatterings of Spanish, and 90s-era slang like “surfing the web” and “cybercafé.” (Has anyone actually used the phrase “surfing the web” since 1999?) The text might be an interesting read on its own, but when spoken, it sounds like one long slam poetry piece. The characters, who have very little back story to distinguish them from one another, do not have their own unique voices. In Svich’s world, everyone speaks the same mélange of languages, but it is hard to imagine that no one has their own speech patterns and idiosyncrasies. The dialogue strikes the ear as unauthentic, as if the character is no more than a mouthpiece for the author. 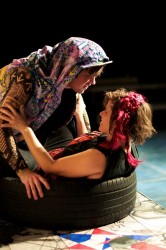 Any fan of dystopian art can tell you that the most powerful concepts of the future stem from the realities of the present. The Tropic of X feels dated. The technological advances of today’s world are so far beyond the imagination of this play that the concept loses its footing in reality. Maura and Mori play vintage video games and treat malls and arcades like places of worship, like teenagers from Saved by the Bell. All of the characters are young, but when they start rattling off slang no one’s heard since the Clinton administration, it sounds a bit like an out-of-touch parent trying to be hip. In The Tropic of X, it is as if the past ten years never happened. I would be happy to sit around and ponder that idea for a few hours, but I suspect the playwright would rather the audience consider the nature of oppression, the dangers of imperialism, or the power of true love.

It is Single Carrot’s production that works, rather than the play itself. The final emotional payoff is surreal and moving, thanks to actors who have deftly built characters out of very little. The play’s text misses the mark, and feels dated and pretentious— think live-action Teenage Mutant Ninja Turtles, if the turtles hung up their weapons and pursued BAs in postmodern poetry.

(Which might actually be hilarious. Someone ought to write that play…)

The play’s heighted language detracts from the intellectual core, but in the hands of a talented director and ensemble of actors, The Tropic of X tells a memorable story about love in the face of overwhelming odds.