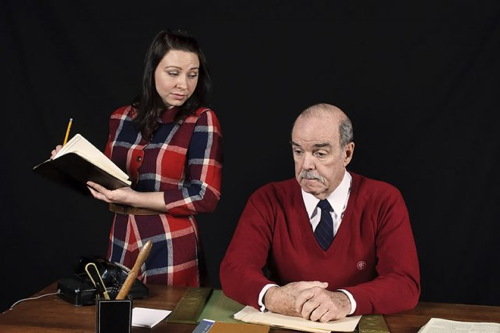 Put together a cantankerous 81 year-old judge and a feisty 25 year-old married woman and you’ve got Trying now playing at The Colonial Players of Annapolis.

Judge Francis Biddle, played by Michael N. Dunlop, enters his office above the garage of his Georgetown home. Waiting there is his newly hired secretary, Sarah Schorr played by Karen Grim. Immediately, the banter begins and the content and conversations build up layers to the end of the show. Additionally, this show is far from a spectacle but what it truly is, is touching.

This is a heart-warming production that will definitely warm your heart from the chill of the winter.

Grim plays Sarah with determination not to quit, perseverance to stand up to the judge, and courage to be honest about the personal challenges she has survived – even though the judge doesn’t want to hear it. Grim herself is posed and charming and yet the interaction between her and Dunlop is like a dance.

Perhaps the playwright, Joanna McClelland Glass intended it to be that way, for Glass was Sarah, but she did not pen the script until she was well into her 60s. By that age, she was able to write Judge Biddle’s character as a mentor to her and how the experience gave her a better understanding of aging and dying.

From the opening of Trying, Grim and Dunlop’s movement is quite linear as if marching with certainty. As the plotline progresses, what the audience is really witnessing is the growing respect and adoration between the aged boss and his maturing employee. By the end of the show, the movement around the office is more curvilinear and they step more lightly.

As Sarah and Judge Biddle, they engage each other with deep conversation and concern about the changing world. Their banter is sprinkled with sharp-tongued and humorous responses. Dunlop brings out the frustrated grouch in Judge Biddle while Grim brings out a more nurturing side of Sarah.

Kudos should go to the Director, Darice Clewell, who has acted, directed, and choreographed plays for The Colonial Players for over 25 years and has served on the board of directors several times. It is a noted accomplishment when a director can present two characters and two hours of ample dialogue, and take them to varying levels of intellect and emotion. For in the end, Sarah and Judge Biddle’s appreciation is quite apparent. This is a heart-warming production that will definitely warm your heart from the chill of the winter.