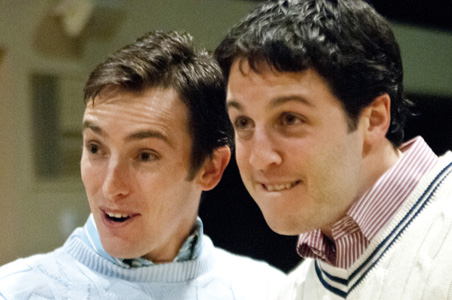 Widely considered one of William Shakespeare’s first plays, Two Gentlemen of Verona, a comedy, delves into love, friendship and the choices some people in love make – but it is also about disloyalty, dishonesty and disrespect, making Two Gentlemen, at times, not so funny.

Director Patrick Kilpatrick equates his version of Gentlemen, produced by Chesapeake Shakespeare Company, to the early 1990s, a decade of privilege and gluttony.  Main characters Proteus (a skillful Vince Eisenson) and Valentine (an enjoyable James Jager), who are two wealthy young men and best friends with the world at their fingertips, spend their time experiencing pleasures and drinking more than engaging in rational thought.

The actors were so comfortable speaking the rhythmic words and performing on stage, I was quickly swept up in the action…

The play begins with Valentine leaving Proteus for Milan.  Valentine wants a new stomping ground and Proteus stays because of his love for Julia (Megan Dominy).   Soon Antonio, Proteus’s father (Frank B. Moorman), urges Proteus to follow Valentine to Mila., So, Proteus swears his love for Julia, and they exchange rings and promise to resume their relationship as soon as he returns.  Meanwhile, in Milan, Valentine meets and falls deeply in love with Sylvia (Ty Hallmark), the “Governor’s” daughter, and Sylvia feels the same. 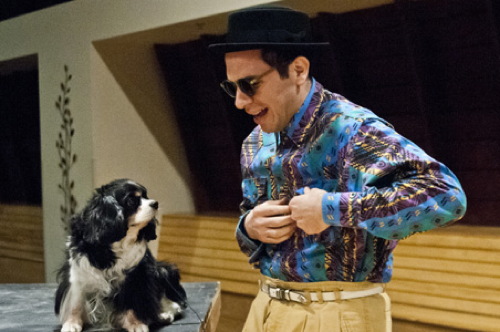 At this point, the good-natured fun comes to an end, because Proteus shows up in Milan and also falls in love with Sylvia, quickly forgetting his love for Julia and not caring that his best friend is already in love with her.  Julia, missing Proteus, travels to Milan to find him, but does so as a boy for safer travels.  Julia meets up with Proteus, but Proteus does not recognize her and professes his love to Sylvia.  Betrayed and hurt, Julia still hides her identity in hopes of winning his love back.  Proteus then betrays Valentine by revealing [to whom?] his plan to squire Sylvia away.  The plan goes awry, and Valentine winds up banned from Milan (and possibly dead), leading Sylvia to sneak away to find him.

A band of outlaws (Greg Burgess, Frank B. Moorman and Jenny Leopold) quickly find Sylvia and capture her to bring to their new leader, who is none other than Valentine.  Proteus finds Sylvia before they make it to Valentine and rescues her.  Proteus then professes his love for her, but she tells him she doesn’t feel the same; she is still in love with Valentine.  Maddened, Proteus forces himself on her, threatening, “I’ll force thee yield to my desire.”  Valentine, however, jumps in to save Sylvia and denounces Proteus. 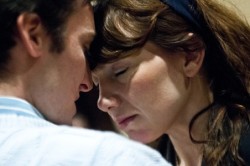 Proteus, finally realizing the depravity of his actions, declares that Valentine cannot hate him as much as he hates himself.  Valentine forgives him. When Julia realizes what Proteus has done, she faints and her true identity is revealed.  Proteus swears his love to her again.  It’s a bit sad to think that love and loyalty can be switched so quickly and that these characters are so willing to accept and excuse such fickle emotions.

True laugh out loud moments and real love professions occur whenever Launce (a fantastic Jose Guzman) and his dog, Crab, found their way on stage.  Guzman’s timing was spot on, and his soliloquies to his dog where spoken with such believability that there are no doubts to the depth of his love for Crab.

I do question Kilpatrick’s directorial choice for the sudden and physical way Proteus handled Sylvia in the rape scene.  But for me, the biggest shock of this production is not Proteus’s behavior but Valentine’s quick forgiveness of it.  Proteus establishes himself as a jerk in the first act scene of the play.

Overall, Chesapeake Shakespeare Company’s production of The Two Gentlemen of Verona is very well acted and directed with little to no stage and props.  The actors were so comfortable speaking the rhythmic words and performing on stage, I was quickly swept up in the action, and I’m sure you will as well.