Through Lines: What is the Community in Theatre?

Whether we are discussing the ranks of the large professional theatres like the Shakespeare Theatre, or the mid-sized Regionals like Woolly Mammoth or Studio Theatre, or community theatres like the Little Theatre of Alexandria or Silver Spring Stage, what is most important about theatre has always been the community it supports and engenders.  That’s right!  Forget the actors and singers!  Forget the directors—musical, managing, and artistic!  Forget the playwrights and theatrical devisors, set and costume and lighting designers, technicians and stage managers, publicists and PR experts!  Forget them all!  It is the community of folk who gather in front of or round the stage that determines the nature and identity of that thing we call theatre. 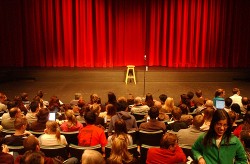 We have an audience. You have a show. Let’s get them together!

Enter a theatre, purchase a ticket or two or three, mingle among the crowd or stand against a far wall, walk into the auditorium and sit among the audience, and suddenly you exist in association, in association with those other people sitting around you.  Suddenly, you are that theatre’s community, its identity of like-minded individuals who have come to see a show.  It does not make any difference if you like the performance that you will soon experience, or not.  Or that you might be at that production for reasons other than to see the show.  Like it or not, even if you go to a show because that’s what your boyfriend wants or that’s what your child needs, you still—at that moment—have that community’s identity.  In some small way, you are that farce, that Greek tragedy, that 1940’s musical, that one-man show, that contemporary experimental drama, or even that revival of Oh Calcutta!  And you will leave the theatre marked as such.

Of course, each theatre’s community is different, and theatre professionals know this.  Thus, the best companies spend a good deal of time considering that difference, and how to cultivate it, strengthen it, or tweak it. And they know it is not enough to say that we specialize in good theatre, because theatre is considered good always in relationship to its audience and to the criteria for excellence that each particular community establishes.  Some communities demand the song and dance, and if a show does not have one or both of those ingredients, then it is all talk and no talent.  Other communities want the cutting edge, the new and vital, and if it’s the same old same old, well: then, it’s the same old same old—so who cares.

The audience of ‘Hair” on stage for the finale.

That’s why script selection—of performance-script or written script—is so vitally important to a theatre’s vision, for it is the most important indicator of a community’s identity.   Think of your average book club—not the most popular one of all, the Oprah Book Club because if you join the Oprah Book Club you do so because you primarily like Oprah.  Thus, she selects a book and it becomes a best seller.  They have even invented a term for it: “The Oprah Effect.”  But the average book club—whether it happens at Politics and Prose, or online at the Awesome Book Club, or in Illinois at America’s oldest running Zelema Book Club—the club is defined by the types of books its members read and discuss.  Sure, the method of discussion might be important, as when Zelema fines those participants who fail to present their book reports on their assigned dates, but it’s the content that matters most.  If the club specializes in historical fiction, then it attracts history and fiction buffs.  If it specializes in murder mysteries, well it will be the detecting that counts.  If, on the other hand, it focuses on books on the Bestseller List, then the content and genre will vary but not the content’s aura of popularity.

Well, theatres are no different.  They put out a reading list (their season) and depending on who shows up (or who does not show up) keep or change or evolve what types of scripts will be on that list in the future.  For theatres, the key always is to keep that list in sync with their community’s taste and desire, not falling too far behind it, and definitely not pushing too far ahead. 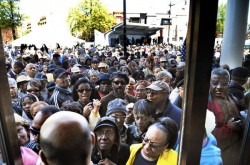 Folks at the doors of Howard Theatre during its 2012 opening.

Fortunately, the Washington metro area is a big place, and a spectrum of  communities support a wide array of theatres.  And given our post-modern, polyglot identities we are capable of identifying with more than one theatre in a given month.  Surely a person who loves a Studio can co-exist within the same body with a person who loves a Woolly or a Signature, or even a Banished?  After all, psychological compartmentalization is alive and well in the 21st century.  In the same way a government bureaucrat might dress in drag on a Saturday night or a minister might hop on a Harley this weekend, so too might you see a Round House tonight and a force / collision next week, then at Toby’s the week after.  Stranger things have happened.

What’s important is to know that your theatre helps define you.  In the same way we ask presidential candidates about their latest book of choice, we might ask them, or our neighbor, about their latest theatrical attendance.  It might be even more revealing, for theatre is a public act whereas reading can forever remain a private affair.  I know, for example, that Lyndon Johnson had already signed the Civil Rights Act of 1964 before he joined Pearl Bailey on stage at the National Theatre during her pre-Broadway run of Hello Dolly, but at that moment Johnson’s community could not have been clearer.   So may we all chose our theatre wisely, for we never know who might be watching.