‘A Quick 5’ with Ashley Johnson 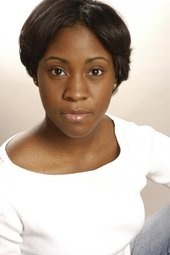 So, I go to to Toby’s Dinner Theatre in Baltimore with my wife Jennifer to see their production of The Wiz. The show starts and there is this little energetic actress singing and acting her heart out as Dorothy. That actress is an incredible young talent named Ashley Johnson. She graduated from AMDA (American Musical & Dramatic Academy) in NYC and is making a name for herself in the Baltimore area. You might have seen her at Toby’s previously in The Color Purple as Squeak or Dreamgirls as Lorrell or Aida in the ensemble or she might have been your server as well. You know how you can tell with certain performers they have that something that sets them apart, well Ashley has a beautiful voice and a smile that you can’t help but love. Her renditions of “Soon As I Get Home” and “Home” are equaled to what Stephanie Mills did over 38 years ago when she premiered in the original production. If you can make the trip to Toby’s Dinner Theatre in Baltimore to see The Wiz, please do. The music is great as is the food, and above all you can say that you saw Ashley Johnson before she won that Tony Award. If it happened to Stephanie Mills it could and should happen to this very very talented young lady.

I grew up in a family of musicians and my mom introduced me to music at an early age. Growing up, my mom would play the piano and have my brother and I sing in church as well as in the living room at home. As kids, music for us was fun and it still is. I have been singing since I was 3 years old.

Were you familiar with The Wiz prior to auditioning for the production at Toby’s Dinner Theatre of Baltimore?

I was very familiar with the show prior to coming to Toby’s. I grew up watching the movie starring Diana Ross and Michael Jackson. When I attended AMDA (American Musical and Dramatic Academy in NYC) my musical theater teacher, Jay Dias, gave me a list of Musicals specifically for African Americans. He and another teacher, Catherine Cox, suggested I study The Wiz and Purlie. They had me perform songs from both shows very often. I am very grateful for them and I still have some of those performances recorded on tape. 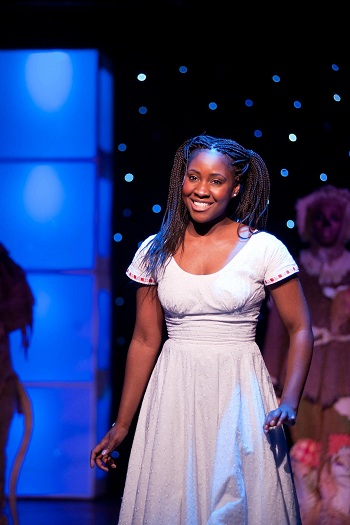 Ashley Johnson as Dorothy in ‘The Wiz.’ Photo by Kirstine Christiansen.

When you do a show at Toby’s Dinner Theatre you are part of the wait staff before going onstage. Most performers I know like some quiet time before they perform so how does that work in this kind of a setting?

Being a part of the wait staff at Toby’s is quite a joy. Meeting the audience creates a much more personable atmosphere. At most theaters you don’t get the chance to meet the audience before the show or see them during intermission; you don’t get to hear how they feel or who they are. I appreciate the opportunity to talk to everyone, especially the children before lights go up!  It gives us a chance to encourage the children to dream, feed everyone positive words of encouragement and tell them to have a great time right along with us. We’re all rooting for each other!

What do you enjoy the most about performing the role of Dorothy?

Performing Dorothy, most of all, I enjoy the spirit of her character. Dorothy is a dreamer, an optimist, upbeat and at heart, a real person. She reminds me so much of myself. She never loses her faith. Sending the message to simply “believe in yourself” to an audience every night is gratifying. There is this freedom Dorothy gets to express through dancing and singing and I myself love what I do. Performing as Dorothy gives me the chance to pay homage to those before me such as Diana Ross, Stephanie Mills, Lena Horne, Louise Beavers, Sammy Davis Jr. and all of the other pioneers I am grateful for and aspire to be like.

After The Wiz finishes its run where can we see you perform next?

As of right now I don’t have any specific shows set in stone but I am out and auditioning from here to New York hoping for the next big thing.