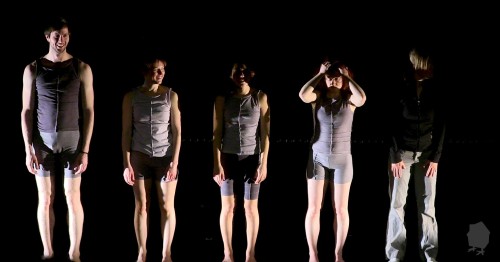 “Resulting in both juncture and separation,” the dance performance Cardinal Points explored intersections of multiple minds and bodies.  And it was fittingly so, as the production from Rebollar Dance was performed as a part of the Atlas Intersections Festival that is dedicated to innovation and connectivity within the arts.

Founded in 2003 by Madrid native Erica Rebollar, Rebollar Dance  is a collaborative of dancers from  many generations and backgrounds.  Indeed, Cardinal Points was choreographed collaboratively by Artistic Director Erica Rebollar and the dancers themselves, who included Samir Bitar, Nate Bond, Heather Doyle, Yoko Feinman, Kjerstin Lysne and Elizabeth Terschuur.  What resulted was a dynamic and varied  50-minute compilation of short pieces, each unique in its expression but part of a cohesive whole  maintained which  the dancers’ resective styles and characters.

… a refreshing professionalism and an innovative approach to contemporary dance.

Throughout the performance the themes of intersection and separation intertwined, beginning with the pre-show performance, which consisted of dancers lying interlaced along a perpendicular line on stage and then flowed through different orientations and groupings.  In “Memory Gap” five dancers moved to the beat of their own drum, only to find momentary synchrony in incremental flashes of yellow light.  “Ex-communication,” a duet danced by Nate Bond and Kjerstin Lysne, incorporated moments of synchronized disco moves to convey the joys of togetherness in unripe relationships, followed by breaks in the routine as the connection fades.

I was entraced by the level of concentration and full-body commitment among the dancers. This was particularly impressive in “Sidewalks,” in which dancers Heather Doyle and Yoko Feinman, after several minutes of spinning like tops, engaged in an elaborate and elastic battle of lifts and flips.  The piece was rendered even more  exhilarating by its luscious blue backdrop and a soundtrack from The Knife.

Several of the pieces were supported by video projects designed by David Dowling.  While they were excellently made and displayed attention-grabbing images, I found myself distracted by the wealth of movement occurring simultaneously.   The exception to this was during a piece entitled “Inside out,” in which dancers Doyle, Feinman, Lysne and Terschuur donned Martha Graham-esque fabric tubes and participated in what I can only describe as “a dance of legs.”  Absurdly entertaining, the piece was over before I’d had enough.

Rebollar Dance company exhibited  a refreshing professionalism and an innovative approach to contemporary dance.  They are exactly what the District needs.