Chilling moments, dark spaces, plus “cool” costumes may yield incandescence.  Such was certainly the case on the eve of the Iceland Dance Company’s debut at the Kennedy Center this past Wednesday.

IDC performed as a part of “Nordic Cool,” a festival in celebration of the arts and cultures of the Nordic region, on-going at The Kennedy Center through March 17.  Having gained recognition across the world as a first-rate contemporary dance company, Wednesday marked IDC’s U.S. premiere. The evening was full of striking choreography, showcasing works from Icelandic choreographers Frank Fannar Pederson, Jo Strømgren, and IDC Artistic Director Lára Stefánsdóttir. 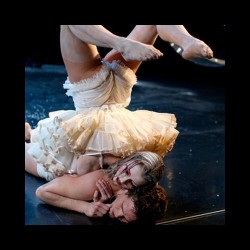 Albeit contemporary dance, IDC’s performance was laden with straightforward and relatable motifs.   The opening act, entitled TIL and choreographed by Frank Fannar Pederson, touched on bewilderment through love and loss and the line between fantasy and reality.  The female dancer begins alone on stage in a frantic and graceful repetition of manipulated movements, signaling a sense of discomfort in solitude.  She is soon joined by a male dancer upstage, and the dancers interacted through a thin translucent film that splits the stage, poignantly conveying the psychological barriers erected in interpersonal relationships.  With this thin film and a hanging rope of collared shirts as the two sole pieces of set design, this duet of codependence rides on its visually stunning choreography and indisputable chemistry between the male and female dancers.

Themes of codependence were revisited in “The Swan,” choreographed by IDC Artistic Director Lára Stefánsdóttir.  Remarkably similar in theme, “The Swan” differed greatly from TIL in costume and mood.  To the delight of the audience, the first glimpse of the stage revealed a grown man, curled as an infant inside a clear swinging ball hanging from the ceiling, wearing nothing but a pair of white underpants.  The less than whimsical themes were soon realized with the appearance of a haunting woman in a tattered dress and ghostly white face, whose power over the infantile male is immediate.  While a dusty powder exudes from the skirt of the woman’s tutu, the exchange continues between woman and man almost as it would between a child and her plaything.  Headed towards disturbing with its melancholic music and spastic moments in choreography, the piece took a satirical turn with the musical shift to Sergei Prokofiev’s version of in the infamous “Swan Lake.”  All-in-all comparable to a game of make believe, the spectrum of sentiment and innovative choreographic made “The Swan” thrilling to watch.

Concluding the evening with a full-throttle burst of energy was “Groβstadtsafari,” choreographed by Jo Strømgren.  Translated as “Big City Safari,” the piece used eight dancers, clad in some form of black patent leather and each of whom remained on stage during the entire 40-minute act.  While the futuristic costumes were eye-catching, the crowd on stage and the copiousness of the choreography verged on distracting.  Arguably, the bustling activity on stage faultlessly mimicked the overwhelming sensation of urban living.  The accuracy of this urban sensibility, paired with the sheer intensity of movement and moments of synchronicity, prevailed.

Iceland Dance Company provides a perfect example of the Nordic region’s innovation through the arts and leaves the audience captivated.  They performed one night only on February 27th to a sold-out house.  For more information about “Nordic Cool,” or for tickets to upcoming performances, visit here.