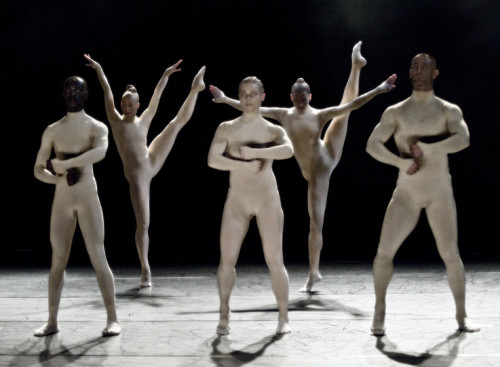 We all know the kind of synchronicity that tingles; the undeniable mixture of elation and dread at the sounds of troops marching in step or voices chanting in unison.  Corps de Walk, the latest from Norway’s contemporary dance company Carte Blanche, induces this sensation in its purest form.

Despite its French name, Carte Blanche performed at the Kennedy Center in Washington as a part of the Nordic Cool 2013 cultural festival.  Founded in Bregen, Norway in 1989, the company tours extensively globally and throughout Europe, and is well known for their ongoing emphasis on commissioned works from hip, new-generation artists.  Indeed, much has been said about the Israeli choreographer of Wednesday night’s Corps de Walk, Sharon Eyal, who has gathered hype in the dance world since her breakthrough work Love in 2003.  Eyal and her partner/co-choreographer Gai Behar have collaborated since 2005, and worked together to stage Wednesday’s production.

‘Corps de Walk’ touches the tenderness close to our hearts, while simultaneously lifting us out of ourselves and daring us to view the masses.

I say the hype is warranted.  The hour long Walk was constructed of 12 bodies.  I use the word “bodies” because that’s quite plainly the only way to describe them.  In rhythmic and perfectly timed unison, dancers created a world on stage that was not defined by the individual.  The choreography was dominated instead by shapes made from multiple bodies, moving in waves across the stage.  With a quality of movement that alternated between robotic and fast to eerily rounded and slow, it was without question that the beings moving before your eyes were of a paranormal variety. 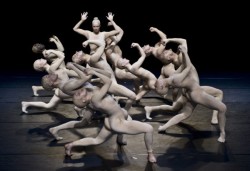 To say that we did not self-identify, however, is not to say that the piece lacked identification. On the contrary, there was a raw humanness within the unified choreographic structures that is not easily recreated in the performing arts.  At one point during the latter half of the show the smallest of female dancers approaches the audience, breaching both the fourth wall and our souls with one terrifying stare through her pale blue eyes.  Moments of anxiety were then juxtaposed with facetious ones, resembling a troupe of Oompa Loompas–the fictional dwarfs from Roald Dahl’s Charlie and the Chocolate Factory. Fluctuations in mood and intent were punctuated by musical changes, be it the sound of crickets in the forest or trouncing electro beats.

Other than the piece running longer than your average attention span, Corps de Walk merits generous applause if not solely on behalf of the dancers, who all danced without intermission, but more appropriately because the work dives head first into the bizarre and the human in a manner few would dare to do. Eyal and Behar’s Corps de Walk touches the tenderness close to our hearts, while simultaneously lifting us out of ourselves and daring us to view the masses.