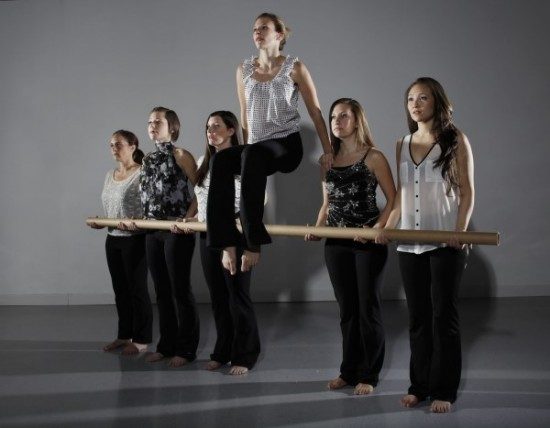 The company of ‘Heartstrings & Shoestring.’ Photo courtesy of UpRooted Dance.

Heartstrings & Shoestrings, presented by Montgomery College’s Communication and Performing Arts Department and UpRooted Dance, touches on topics that may capture your heart, or leave it trampled.

Despite its valiant effort, however, these “stories of love and woe” fell slightly short of woo.

Let me begin with the good: The performance had a clear theme and intention. From the first point at which the six impeccably primped dancers appeared across the stage, with their Miss America smiles and high-heeled pumps, it was clear that the work was a commentary on societal standards of and competition between women in modern westernized culture. Each female dancer appropriately personified a different stereotype of modern woman: the sly, the sexy, the scorned, the deflated, the dumb, or the doe-eyed. Dancing with and against each other in cocktail attire, the dancers in each segment revealed how women are treated, both by men and each other.

…had the makings of very dynamic and hilarious performance

The work was choreographed by UpRooted Dance’s Artistic Director Keira Hart-Mendoza and used music from David Schulman. Dancers Caroline Barna, Jamie Doughty, Kate Folsom, Shelby Gratz, Mariel Proctor, and Melissa Swaringen, were all stunning in presentation and believable in their respective characters. Accompanied by the hilarious and lovely Sabrina Mandell of Happenstance Theater, interactions between the chorus of young beauties and their klutzy guardian provided many moments of comic relief. 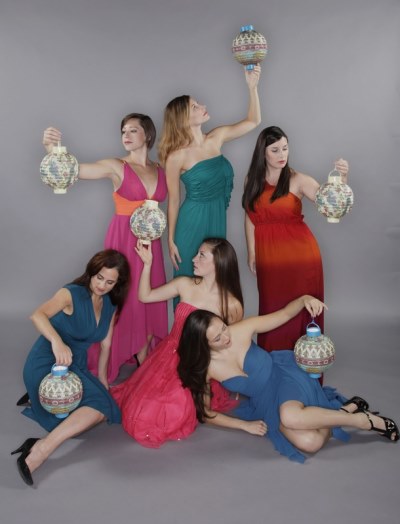 Additionally, Heartstrings & Shoestrings employed a delightful mélange of performance styles. While contemporary and jazz-inspired dance dominated the evening, the audience also experienced a satirical dating show complete with audience participation, a round of heartfelt testimonials, and scene with a snorkel and flippers. Among the highlights of the evening was a symbolic and comical quintet involving a long plastic pole, with which the dancers shoved and pulled and tripped one another with surprising agility.

It was neither the overall theme nor the production values that merits my flat reaction. I was, instead, bothered by the unclear relationship between the girls and Mandell, who seemed to play both the guardian and the wannabe. Furthermore, the varying performance styles were often disjointed and without flow, resulting in a confusion of general message. While the performers had noteworthy talent, and the choreography had the makings of very dynamic and hilarious performance, the production as a whole didn’t quite come together.