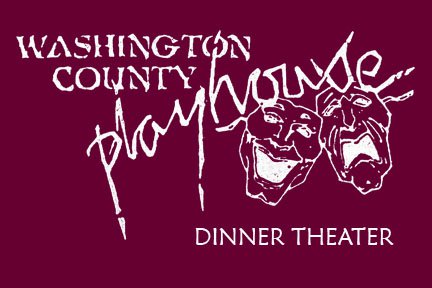 THE CHURCH OF DIMINISHING MARGINAL RETURNS by Jay Huling. When incorrigible entrepreneur Josh Pocket finds himself in financial trouble, he cons his evangelical brother Jon into starting their own church. Josh and Jon are so successful they’re able to pay off most of their debts. This doesn’t sit well with their banker, who has been making a handsome living off the interest from their outstanding loans. When the IRS uncovers the “church’s” activities, they investigate. This means that Josh and John must get their act together to qualify as a real tax-exempt church. Hilarious! Show dates: April 13, 19, 20, 26, May 4, 5, 11, 18, 24 & 25.

Jacob Marley’s Christmas Carol – This wonderful telling of the traditional story by Charles Dickens is from Jacob Marley’s perspective. Marley is told that if he can redeem Scrooge’s soul, they will both spend eternity in heavenly bliss. But Marley knows that Scrooge was even worse than he himself was…and that was 7 years ago this very night. Show dates: December 7, 13, 14, 20, 21, 22, 28, January 4, 10 & 11. (May or may not be the featured show on New Year’s Eve.)

(All shows and dates are subject to change.)

The dinner theater that hides behind Hagerstown’s City Hall in the shadow of the town’s mascot, Little Heiskell, was opened by Bob Hagerman in 1985. In 1986, Bruce Levin and a partner, bought it and changed its name to The Washington County Playhouse. In 1998, Kelly Jenkins-Moreland and her mother, Dixie Odermatt bought it and operated it until August of 2009, when the current owners, Loretta and Jeff Czerbinski, took over.

Since its beginning, The Playhouse has been known for producing popular and much-loved Broadway musical classics, such as “Oklahoma,” “South Pacific,” “Annie Get Your Gun,” and “The Sound of Music,” as well as the occasional light comedy or drama. During Kelly’s tenure, musical reviews became very popular with audiences, and are today a frequent fixture at The Playhouse.

Today’s Washington County Playhouse will continue to evolve, bringing to local audiences classic Broadway, comedies, dramas, revues, and more current theatrical works. And, we will continue to provide a varied dinner buffet and full bar. Our objective is to provide professional quality productions, extraordinary customer service, and good food & drink. We will do everything in our power to provide our guests with what we hope they will perceive as unsurpassed value in live entertainment.