Theater Review: ‘A Walk in The Woods’ at Quotidian Theatre Company 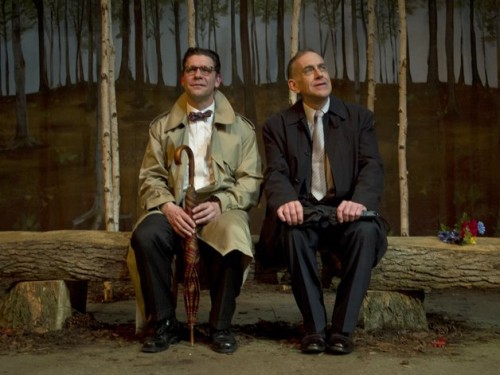 In the woods of Geneva, Switzerland two arms negotiators, one American and one Russian, meet to hash out an arms deal for their respective countries away from the glare of the press. That is the basic premise of Lee Blessing’s play A Walk in The Woods, which is now playing at The Writer’s Center in Bethesda and is presented by Quotidian Theatre Company.

…definitely worth your time and money.

Though the plot is simple, there is nothing simple about the subject matter.  Arms negotiations might be one of the hardest jobs in the world because the stakes are so high. In this case our Russian, Andrey Botvinnik (Steve LaRocque), and our American, John Honeyman (Britt Herring), are the two men embroiled in a battle to have an agreement that will keep both American and Soviet leaders happy. If you know your history, you know how the arms negotiations turned out. If you don’t, go see the show and then start googling to find out more. 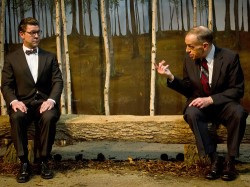 Of the two performers Brit Herring’s Honeyman is the stronger of the two. His performance has lots of fire and drive. When Botvinnik makes a condition that isn’t about arms, part of the dialogue becomes about frivolous things.  Honeyman just lets it happen for a while and then gets right back to business.

While Steve LaRocque is a good performer, there was one thing missing from his portrayal of Andrey Botvinnik, and that was any hint that he is a Russian. I am told from a reliable source that some negotiators, regardless of where they are from, have perfect English. I can buy that, but I can’t believe he would not have a hint of a Russian accent; in fact, he sounds more British or Irish to me. Regardless of the missing accent, Larocque’s chemistry with Herring is quite good. The two men play off of each other like a well seasoned acting team should. 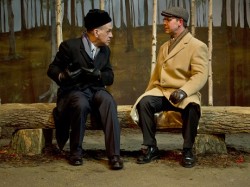 Director Gillian Drake has staged the show at a good pace without trying to over stage it. She just lets the two men do their job and lets the script breathe.

The set by Samina Vieth makes good use of the performance space and Don Slater’s mood lighting helps enhance the forest-like setting.

A Walk in The Woods at Quotidian Theatre Company is definitely worth your time and money.  I couldn’t help but think while watching this show, how relevant its issues are with what is happening today in our own country. Not only does the script have a lot to say about foreign relations but our elected officials could learn a thing or two from these two skilled negotiators about the art of political negotiation. And for those who think this show is dated and there are no nuclear threats anymore, I have three words: Iran and North Korea. Just open the Washington Post and you will see that the play is still all too relevant.

Running Time: One hour and 40 minutes, with a 15-minute intermission.